CONSTANT FIGHTING, bickering, competing, and jealousy—they're all the classic signs of sibling rivalry that most parents have confronted at one time or another. But this isn't exactly a new phenomenon. Look at the story of Joseph in the Bible. Joseph's brothers' jealousy ran so deep that they sold him into slavery and deceived their father into thinking he'd been attacked and killed by wild animals. The rivalry parents see in their children today seldom goes to those extremes, but many parents find it's an issue driving them to prayer.

When I was growing up, my two siblings and I just couldn't get along. But now that we're adults, we're all good friends with a very special bond. What caused this turn-around? I believe it was, among other things, the fact that we let go of past grudges and began seeing each other in a more Christlike light—one that acknowledged our deeper spiritual natures.

This program in my family has helped me lessen the signs of sibling rivalry between my own young son and daughter. It used to be that they'd just fight and fight with each other, often competing for attention or some desired object. Sometimes there would be screaming, biting, hitting, pushing. For a while, I just brushed it off as a combination of toddler and sibling behavior.

MY HUSBAND AND I NOW HAVE A PLAN OF ACTION. WE TAKE EVERY OPPORTUNITY TO TALK TO OUR CHILDREN ABOUT THEIR SPIRITUAL QUALITIES.

But what is "the moral and spiritual law"? Moses gave a strong sense of it in the Ten Commandments, and Jesus gave the true essence of it in his Sermon on the Mount, which includes the Lord's Prayer and the Golden Rule (see Matt., chaps. 5-7). I realized that Jesus' teachings address such topics as holding grudges (something siblings very often end up doing), forgiving (a key element in healing any relationship), and deliberately praying for those who act as enemies. These were all elements I wanted to underscore in my parenting.

As I continued to pray about this issue, I remembered a line from Science and Health that often comes to my thought: "When we realize that there is one Mind, the divine law of loving our neighbor as ourselves is unfolded; whereas a belief in many ruling minds hinders man's normal drift towards the one Mind, one God, and leads human thought into opposite channels where selfishness reigns" (p. 205). I saw that my children didn't have little minds separate from God that can think unloving, un-Godlike thoughts. They're always one with the one and only divine Mind.

I can't say there's now complete harmony between my children. They still bother each other off and on. But we've made a lot of progress. When those things happen, my husband and I now have a plan of action. Rather than resort to irritation and reaction, we take every opportunity to talk to our children about their spiritual qualities, and especially about how important it is to listen for God's good, loving thoughts to guide their actions. We ask them questions such as "What is God telling you to do?" and "What are God's good thoughts at this moment?" We're finding this immediately defuses combative situations, and that the children are now expressing more genuine affection toward each other on a consistent basis.

Looking back to Joseph's life, we see that instead of hating his siblings for the terrible things they'd done to him, he chose to love them unconditionally. I'm convinced that the more we show our children how to act like Joseph—to love God and love doing good—the less sibling rivalry will occur. Examples like his, along with the true moral wisdom that Jesus taught, will equip our children with the strong character-building tools that will improve the relationships they encounter all through life, |

Julie Trevor-Roberts is a Christian Science practitioner. She lives with her family in Marietta, Georgia. 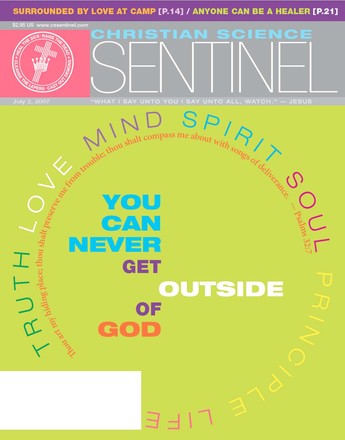 YOU CAN'T GET OUTSIDE OF GOD

A KINGDOM 'IN THE MIDST'

SURROUNDED BY LOVE AT CAMP

Where we really live

MOSES and the Women of Darfur

THE REWARDS OUTWEIGH THE TASKS AT HAND

PUTTING A STOP TO SIBLING RIVALRY

By STEFANIE JONES with contributions from WALTER D. JONES | July 2007