A friend and I were camping with our horses in the wilderness on the North Rim of the Grand Canyon a few years ago. Early that morning the woman who was camping next to us told us through tears that her horse had gone missing the previous night.

Given that the Grand Canyon has its share of predators and other dangers, she was absolutely convinced that the horse was either hopelessly trapped somewhere or most likely dead. She was positive that she would never see her horse again.

Sometimes when facing major challenges, like this woman, people often react by believing in the worst-case scenario. A pall of negativity that can often seem palpable communicates a belief that evil is inevitable and unstoppable.

Yet, there actually is hope, no matter what. The Bible states, “With God all things are possible” (Mark 10:27).

That is an unequivocal statement. It doesn’t say, “Under most circumstances” or “If the atmosphere surrounding a situation is positive.” It says specifically that God is “a very present help in trouble” (Psalms 46:1). This is based on the fact that God is good and God is all. And this can be proved in the life of any sincere seeker.

The Bible is filled with accounts of challenging situations that appeared to be hopeless that were resolved through prayer. Often it appeared that the amount of negative thinking was so pervasive that there wasn’t a single ray of hope. But each time the trust, sometimes held by only one individual, that “all things are possible to God,” saved the day.

One thing that is often necessary when praying about situations where negativity (fear, belief in the reality of evil, etc.) seems to predominate, is to firmly put the erroneous suggestions out of our own thought. When confronted with suggestions of negativity, because we understand God, good, to be all, we can turn away from the suggestions that evil does exist, and affirm the reality and power of God, good, right where evil seems to be.

We can turn away from the suggestions that evil does exist, and affirm the reality and power of God, good, right where evil seems to be.

Jesus’ ministry provides a good example for us to follow. He was called to heal Jairus’ daughter (see Luke 8:41, 42, 49–56). But news reached him that the girl had died. He told the father, “Fear not: believe only, and she shall be made whole.” When they arrived at the home, Jesus saw that everyone believed she was dead, except for Jesus. It was a very sorrowful picture. The Bible describes the scene: “And all wept, and bewailed her: but he said, Weep not; she is not dead, but sleepeth. And they laughed him to scorn, knowing that she was dead.”

Jesus then literally put all the people with their beliefs that she was dead out of the house. The child’s life was then restored through the recognition that life is eternal. It became evident to all that Life was indeed present and demonstrable. Sometimes we have to do the same thing. We can close the mental door on any fear or doubt that God cannot help. At the same time, this opens the door wide to the certainty and proof of God’s omnipresence and power.

That requires us to prayerfully yield to the absolute power of God’s goodness right where a challenging situation seems to be. We can reach out to see the universe that God has created, where only good exists. We can ask God to reveal Himself/Herself as with us, guiding us to a perception of good, even in what may seem like universal negativity.

When we are faced with news of tragic world events, or a hopeless diagnosis about a loved one, or even our own fear that good is not available to help, we can reach deep into our trust in God’s amazing goodness, and what we have already proved of His love. The conviction we gain from this prayer is evidence of the Christ, which is able to dissolve the appearance of evil’s reality. The perception that good is absent is replaced by the conviction that good is indeed omnipresent and discernible. This is spiritual law, which is based on unchanging divine Principle that underlies and supports the entire universe of God’s creating.

As I listened to this woman’s sorrowful tale, my heart went out to her. I told her I would be praying for her missing horse. She muttered, “Well it couldn’t do any harm.”

So I began to pray. First I put all suggestions of death, hopelessness, and negativity completely out of thought. I did know that, as Mary Baker Eddy writes in her book Science and Health with Key to the Scriptures, “All of God’s creatures, moving in the harmony of Science, are harmless, useful, indestructible” (p. 514). This harmony results from the unity of God, Life, and His creation. Because God is inextinguishable, God’s creation, when seen from a spiritual perspective, is indestructible.

By afternoon, with the horse still missing, the whole camp (of probably sixty people), with the exception of my friend and myself, were absolutely convinced that the horse had perished. It was as negative an atmosphere as I had ever experienced.

And yet, I held to what I knew of God’s love for all creation. I affirmed that God’s law of life triumphs no matter what the suggestions to the contrary might argue. I mentally insisted that God is omnipresent, and we can trust His government of His creation.

Then, after being missing for 14 hours in a wild and dangerous place, the horse came out of the woods, completely unharmed. There was great rejoicing over her return.

When you are faced with a situation that seems impossible to resolve, think of Jesus and Jairus’ daughter. And maybe of the horse that came out of the woods. 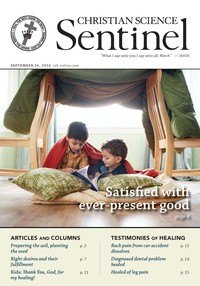