THE account of the healing of the nobleman's son, in the fourth chapter of John, touches on a point of much interest and importance in the practice of Christian Science. The child had appeared to be near death, and the nobleman sought Jesus' help. In response to his plea, "Come down ere my child die," Jesus said, "Go thy way; thy son liveth;" and the father, on his return home, learned that the fever had left the boy when Jesus had spoken.

It can hardly be doubted that the Master, as he talked with the nobleman, desired to say something that would be both understandable and reassuring to him; but it is certain, in view of the healing which resulted immediately, that the statement, "Thy son liveth," did not refer merely to the boy's human condition. Jesus was plainly recognizing and declaring the spiritual truth about him: that he lived as the perfect expression of divine Life, God. The Saviour knew that this fact had not been changed, and could not be changed, by the false and unreal testimony of the material senses; and this clear and natural recognition, Christian Science clearly shows, was what healed the disease.

As the Christian Science textbook, "Science and Health with Key to the Scriptures" by Mary Baker Eddy, states in explaining the method of Christ-healing (pp. 476, 477): "Jesus beheld in Science the perfect man, who appeared to him where sinning mortal man appears to mortals. In this perfect man the Saviour saw God's own likeness, and this correct view of man healed the sick."

It was not, therefore, conceding that the nobleman's son had been sick, and endeavoring even with great earnestness to make him well, which brought his healing. It was perceiving that, in reality, he had not been, and could not be, sick.

Christian Scientists delight in the understanding that what is involved in this unfailing healing method is only the true honoring of God. He is changeless All, and He is perfect Life, as the Scriptures imply. Therefore disease is impossible and unreal. All there is to it, as it appears to human sense, is all there could be—an illusion, a mesmeric or hypnotic false sense, without any quality of truth.

Christian Scientists see, then, that they are in no instance changing a diseased condition into a healthy one, although such changes continually and abundantly appear to human sense, through their work. This truly scientific healing results from the realization that there has been and is no disease. Such realization comes as an awakening from an illusion; and the awakening quite naturally brings evidence of the health and harmony that have already, and forever, been present.

The Scientist knows that his need in every instance is simply to recognize with full conviction that the one who has seemed to be the patient lives, and with what quality of life he lives—not meager life, not impaired or threatened, but buoyant, assured, and free; expressing divine substance and consciousness, the eternality and beauty of Spirit. Such recognition, or worship of God in Christian Science, is continually proved to be effective in healing today, as it was in the Master's time.

One instance may be cited here. A student of Christian Science, while on a vacation, jumped from a small boat in which he had been riding barefooted, and alighted in a bed of stinging nettles. Intense pain in his feet and legs followed. He gave himself a treatment in which he recognized that the accident had not really occurred, and that only the perfect harmony of Mind and its manifestation had been present; and the pain quickly stopped. Then he called to his wife that he had been stung by nettles, adding that the treatment had removed the pain. Almost instantly, the pain returned; and the student saw that he had, in effect, reversed the treatment by admitting that he had been stung. He then gave himself another treatment in which he realized conclusively that he had not been stung. When that treatment was over, the pain was gone again; and it did not return.

The potentialities of this healing method are further indicated in Jesus' raising of Lazarus. The Master had said plainly to his disciples, to show them what the condition seemed to be, "Lazarus is dead." But Mrs. Eddy, through her clear and continually demonstrated understanding of the Master's practice, was able to write (Science and Health, p. 75), "Jesus restored Lazarus by the understanding that Lazarus had never died." "Had Jesus believed that Lazarus had lived or died in his body," she added, "the Master would have stood on the same plane of belief as those who buried the body, and he could not have resuscitated it."

The Christian Scientist, following the example of Jesus, does not base his conclusions on material conditions, whether good or bad, nor does he accentuate such conditions to others or himself; instead, he recognizes their nothingness, and the perfection of God and of man as His likeness. This recognition, in the measure that it is full and clear, heals whatever needs healing. 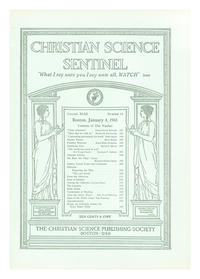