If you’ve ever struggled with a bad character trait, you know that it can be a beast. Shakespeare called jealousy, for example, a green-eyed monster, and I was its unhappy prisoner until Christian Science released me.

It can take work to stop believing that a character flaw is baked into who we are. Greed, envy, hatred, and pride are so prevalent in people and nations that we call them human nature. But is evil really our nature? What about the generosity of neighbor helping neighbor, the sacrifices people make for a cause, the decisions that guide individuals or nations to do the right thing? Actions such as these point to an underlying motivating goodness. As explained in Christian Science, this powerful good is God, the Soul of all that really exists.

We may be ready to admit that God is good, but what about us? We’re not God. No, but God’s goodness must be expressed. That expression is man. Man is the overarching term in Christian Science for the true, spiritual identity of every man, woman, and child. We might be accustomed to thinking that man is a mortal who is both good and bad, but understood rightly, spiritual man is actually the full expression of God, Spirit. This is true no matter how often a mortal sense of ourselves and others tries to make us lose sight of it.

It is the unbreakable unity of God and man that makes the divine nature available to everyone. Man is God’s creation, the embodiment of all the attributes of divinity. So our prayers and efforts to be free from a fault aren’t attempts to make a bad character a little nicer. Rather, we want to become conscious of what we really are: an individual expression of divine Love, God.

In my own case, I was captive to jealousy and its destructive effects until my prayer awakened me to this new idea: Jealousy wasn’t truly part of me. When I took to heart what I had learned in Christian Science—that we belong completely to God, and that it’s our real nature to express good—the jealousy dropped away, and a warm love was there in its place.

We may be ready to admit that God is good, but what about us?

The Discoverer and Founder of Christian Science, Mary Baker Eddy, wrote extensively about overcoming evil through an understanding of good. Her words give us a spiritual foundation to do this: “All real being represents God, and is in Him. . . . Man’s real ego, or selfhood, is goodness. If man’s individuality were evil, he would be annihilated, for evil is self-destroying” (No and Yes, p. 26).

Gaining freedom from a character fault must begin with the recognition that we’re not dealing with a sinful person but with a false belief; in other words, the sin is a mistaken perception that we have a personal will apart from God. Gaining our freedom may also require us to counter the urge to be so ashamed or shocked by our behavior that we make no move to change. At its core, any resistance to reform is the persistent thought that an ego prone to evil exists and has power to make us sin.

Christ Jesus provided many examples of how real changes take place in human character. He rescued people both physically and morally by embodying the Christ—his relation to God—which destroyed sin. A woman who was accused of adultery was saved and redeemed; a tax collector named Zacchaeus was reformed. This man vowed that any money he had taken dishonestly would be paid back fourfold and that he would give away half of his riches. Think of what it must have meant to Zacchaeus to hear Jesus say: “This day is salvation come to this house, forsomuch as he also is a son of Abraham. For the Son of man is come to seek and to save that which was lost” (Luke 19:9, 10). Jesus recognized in Zacchaeus the spiritual sonship, or identity, that had no desire to sin, and in turn, Zacchaeus saw himself in this Christ light and was free.

We can be free, too. The eternal Christ, the spirit of Truth and Love, empowers us to deny reality or influence to a mortal mentality just as Jesus did. We can recognize what the Christ continues to reveal: that everything good and true in us expresses the Life and Love that are God. Mrs. Eddy gave humanity a line of hope when she wrote: “Sooner or later the whole human race will learn that, in proportion as the spotless selfhood of God is understood, human nature will be renovated, and man will receive a higher selfhood, derived from God, and the redemption of mortals from sin, sickness, and death be established on everlasting foundations” (Unity of Good, p. 6).

When a glimpse of that “higher selfhood” liberates us from character faults, it breathes new life into all our relationships. We see that the joy of spiritual individuality is in fact natural to everyone. Divine good is the center of our lives and is universal. What we know and live of this truth evidences for humanity that nobody needs to be imprisoned by negative traits. The good that is God is always here and near to free us.

Send a comment to the editors
NEXT IN THIS ISSUE
Article
Expect God’s goodness . . . immediately! 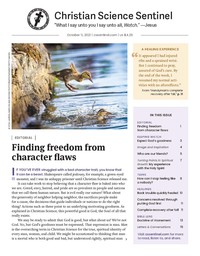