The Coming of the Son of Man

The distinction between spirituality and materiality is being clearly discerned by a larger number of people than ever before in the world's history, and this great boon to humanity has become practicable through the discovery of Christian Science. Christian Science makes clear the line of demarcation between the universe of Mind, God, and the world of sense phenomena, and to see this is the great need of humanity to-day, because without knowing the difference between the workings of the divine energies of Spirit and the aggressive forces of evil we can have no intelligent grasp of events and phenomena in individual affairs or of the tremendous struggle of the nations.

Christian Scientists understand more clearly, doubtless, than any other body of Christians the absolute nature of Spirit, its all-inclusiveness, immutability, omniscience, and omnipresence; and they are also cognizant of the evanescent, unsubstantial, and illusive character of the material world and of physical sense testimony. They recognize that God is the all-knowing Mind, that man in reality is wise, intelligent, deathless, perfect, spiritual, because he receives these qualities from his Father, divine Love. They likewise know that human, mortal man is the mere counterfeit of the real man, and that their chief business in life is to "put off the old man with his deeds" and to demonstrate the fact of man's real existence as a spiritual being, the child of God, utterly divorced from materiality.

Christ Jesus came to earth to show men the way of eternal life, and he made this way clear and plain by opening the understanding of men so that they could grasp the nature of the things of Spirit, and thus become aware that matter, mortality, ritualism, lust for power, sin, sickness, and all the manifestations of sense phenomena, are mere dream shadows without law and without Principle. Christ Jesus was the Son of God, but in order to leaven the darkened thoughts of mortals and gently lead them along the straight and narrow path from sense to Soul "he was appointed to speak God's word and to appear to mortals in such a form of humanity as they could understand as well as perceive" (Science and Health, p. 332). Jesus is often referred to in the Bible, and particularly in the gospels, in Romans, Hebrews, the first epistle of John, also in Revelation, as the Son of man and as the Son of God. In his absolute selfhood he was the Christ, the Son of God; as the man Jesus, the anointed of God, he was the Son of man who came to present the spiritual idea in such a form that men could comprehend it. The understanding of this spiritual idea, the Christ, heals them of the ills of mortality and demonstrates life eternal. A most inspiring and valuable study is to compare and ponder the various passages of Scripture where Christ Jesus is spoken of as the Son of man or as the Son of God. By this study and by the study of correlated passages in our Leader's writings we can understand how "the Word was made flesh, and dwelt among us."

Now this advent of the Son of man, this appearing of a more spiritual sense of existence, comes daily and hourly to human consciousness. It is a continuous calling to mortals to rise out of human beliefs. Since Christian Science has been given to the world, the coming of the Son of man has become better understood, and his sign in the heavens—the healing of sin and sickness by spiritual power—has been more and more clearly discerned. Christian Science makes clear the redemptive mission of the Son of man, because it separates truth from error and presents to men the opportunity of proving the great facts of God and His universe.

The effect on mortals of this ever recurring consciousness of the spiritual idea depends on the manner in which mortal receive it. If they "put off the old man with his deeds," joyfully accept the coming of the Son of man, gladly acknowledge their unity with God, they can truly say with the wise men, "We have seen his star in the east, and are come to worship him." Referring to these willing seekers, Jesus said with ineffable tenderness, "The Son of man is come to seek and to save that which was lost;" and, "Fear not, little flock; for it is your Father's good pleasure to give you the kingdom." Mortals are not, however, always willing or ready to accept this coming of the Son of man. They are prone to resist the divine appeal, and this resistance manifests itself in the warfare between the Spirit and the flesh, in which sin, sickness, and death are finally exterminated.

On various occasions Jesus made perfectly clear that his mission was not only to lead men to possess their divine heritage as sons of God, but also to destroy, with spiritual power, the errors that held them in bondage; because, unless the power of Truth frees men from evil, they cannot attain that singleness and purity of thought by which alone they come into the presence of God. Referring to the power of Truth to melt and refine the sinful, stubborn mentality, Jesus said, "I am come to send fire on the earth;" and on another occasion, referring to those who cry, "Peace, peace; when there is no peace," in the warfare between Truth and error, he said: "I came not to send peace, but a sword." He clearly portrayed the opposite effects produced upon the thought purified and prepared, and upon the darkened mentality which resists the truth. When those who are waiting for the appearing of the Son of man see the "distress of nations, ... the sea and the waves roaring," they have the Master's admonition: "Then look up, and lift up your heads; for your redemption draweth nigh." But of those who refuse his benign call the Master said that when the "sign of the Son of man" shall appear in heaven "then shall all the tribes of the earth mourn." What is the sign of the Son of man but the healing power of Christian Science destroying sin, disease, and death, and proving man's eternal at-one-ment with God? And who are the tribes of the earth that mourn but those mortals who hold to the illusions of corporeality, are "of the earth, earthy," and who mourn when, despite their resistance, their pet sins, their ease in sensual living, and their false pleasures vanish in pain and woe like dry straw in a fiery furnace.

The Master spoke of "the Son of man coming in the clouds of heaven with power and great glory." Now, it depends upon each of us individually, as well as upon nations, whether we see the Son of man coming "in the clouds" or with "great glory." Doubtless "the sign of the Son of man," as seen in the manifestation of purified public opinion that will irresistibly destroy the liquor traffic, seems a cloud to its proponents. So likewise to the self-willed, dominating human thought that would refuse woman the right of suffrage, this great reform seems a cloud, a darkness, a turning back from conventional standards. But to advanced thinkers these reforms and upward steps are hailed with joy, because they bring freedom, power, and glory to millions of men and women; and this freedom, power, and glory are not confined to those who joyfully accept spiritual things: the blessings of the spiritual idea, the divine ever presence of Spirit, reach and bless all men. "Your Father," said the compassionate Master, "... sendeth rain on the just and on the unjust." So, too, when the law of divine justice destroys for mortals their evil beliefs, whether they first agree or not, and they find that through the pangs they suffer these evils are no longer profitable or pleasurable, they also find, when they turn from them and their understanding is awakened, that divine Love is ever tender, ever healing, and that "behind a frowning providence He hides a smiling face." These mistaken ones, when purified and chastened, find to their joy that they are not lost, that their lot is not worse, but that, on the contrary, their lives are better, freer, happier than ever before.

Christian Scientists rejoice in the coming of the Son of man. By their prayers, their demonstrations of the ever presence of God, they are hastening his appearing. They know that human resistance cannot stop or hinder the victorious advance of the omnipotent, spiritual idea, the Holy Ghost, which will uncover and destroy all evil of whatsoever nature, and that the Christ, the Son of the living God, will be made manifest to all the children of God. The arousing of evil, the raging of the great red dragon, the stirring of latent mortal beliefs manifested in "wars and rumours of wars," and in nation rising against nation, do not overwhelm them. These phenomena show merely that evil is being uncovered and destroyed. They testify that the leaven of truth is at work in human consciousness, purging it of all evil. When this is accomplished then shall all men rejoice in the goodness, wisdom, and power of God, and say with the Revelator: "Now is come salvation, and strength, and the kingdom of our God, and the power of his Christ: for the accuser of our brethren is cast down." 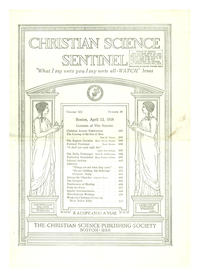