I will instruct thee and teach thee in the way which thou shalt go.

The Lord is thy shade upon thy right hand.

Under the intense desert sun of the ancient Near East, shade represented protection. This image of divine shelter appears throughout the Hebrew Bible, elsewhere expressed by the word shadow (see examples in Isaiah 25:4 and 51:16).

“Upon thy right hand” points to the usual position of a protector, including coverage of the unshielded side of a warrior. Some sources believe it refers to the southern direction from which the sun’s fiercest rays shine.

Like as a father pitieth his children, so the Lord pitieth them that fear him.

The Lord is like a father to his children, tender and compassionate to those who fear him.

Here pity isn’t intended to convey sympathy or sorrow. Racham, related to the Hebrew word for womb, expresses motherly feelings. It is most often rendered mercy or compassion in the Bible.

Whether depicting typically masculine or feminine qualities, this statement describes God’s care for His people in terms of a parent’s kindness and love.

There arose a great storm of wind, and the waves beat into the ship, so that it was now full.

In this account, the Master and his disciples are crossing the Sea of Galilee. Located about 700 feet or 200 meters below sea level, this body of water is ringed by hills. The collision of cold mountain air with warmer air in the sea basin sometimes generates hurricane-force winds to this day.

And he arose, and rebuked the wind, and said unto the sea, Peace, be still. And the wind ceased, and there was a great calm.

Christ Jesus’ authority over the storm echoes his rebuke and charge to be still in casting out demons (see examples in Luke 4:35, 41, and 9:42).

The Master’s dominion over mental disturbance is immediately demonstrated when he encounters a lunatic man near Gadara at the end of the trip over the Sea of Galilee (see Mark 5:1–15). “Both stories,” writes a researcher, “display Jesus’ power to rescue lives … from the chaos of both nature and human nature.”

He shall give his angels charge over thee, to keep thee in all thy ways.

Satan cites this biblical promise when tempting Jesus to jump from the Temple (see Matthew 4:5, 6). Though the devil is depicted as having angels (see Matthew 25:41 and Revelation 12:9, citation 23), most scriptural references to angels describe heavenly messengers or guardians.

Then the high priest rose up, and all they that were with him, (which is the sect of the Sadducees,) and were filled with indignation, and laid their hands on the apostles, and put them in the common prison.

This is the first of three accounts of the imprisonment of followers of Christ. In this case, a group is detained. Later, Peter (see Acts 12:1–11) and then Paul and Silas (see 16:22–26) are jailed. Each time, divine power frees these believers.

Thou shalt tread upon the lion and adder: the young lion and the dragon shalt thou trample under feet.

Deadly creatures were common symbols of danger in ancient times. In First Peter 5:8, the devil is described as “a roaring lion.” Adders and serpents appear throughout Scripture in portrayals of evil (see examples in Psalms 140:3 and Proverbs 23:32).

Dragons were usually considered mythical beasts, often sea monsters (see Isaiah 27:1, for instance). The king of Babylon is compared to a devouring dragon, and his land to “a dwelling place for dragons” (Jeremiah 51:34, 37). A “great red dragon” epitomizes evil in Revelation, chap. 12.

There was war in heaven: Michael and his angels fought against the dragon; and the dragon fought and his angels, and prevailed not; neither was their place found any more in heaven. And the great dragon was cast out, that old serpent, called the Devil, and Satan, which deceiveth the whole world.

The terms devil and Satan are used frequently in Scripture. Devil (Greek, diabolos) means false accuser or slanderer. Satan is the name given to an adversary, especially the enemy of Christ.

A commentary notes that the Revelator’s account of the destruction of evil differs markedly from early tribal myths: “Christ and the church do not use weapons of violence to conquer the enemy. They overcome the dragon through the sword of God’s word, by the blood of the Lamb, and by faithful suffering. They defeat the dragon by freeing its human agents from sin’s control and helping humanity to repent.… God’s people are completely sustained and empowered by the Spirit in their battle with the dragon.”

The Lord Is My Fortress

Live under the protection
of God Most High
and stay in the shadow
of God All-Powerful.
Then you will say to the Lord,
“You are my fortress,
my place of safety;
you are my God,
and I trust you.”

The Lord will keep you safe
from secret traps
and deadly diseases.
He will spread his wings
over you
and keep you secure.
His faithfulness is like
a shield or a city wall.

You won’t need to worry
about dangers at night
or arrows during the day.
And you won’t fear diseases
that strike in the dark
or sudden disaster at noon.

You will not be harmed,
though thousands fall
all around you.
And with your own eyes
you will see the punishment
of the wicked.
The Lord Most High
is your fortress.

Run to him for safety,
and no terrible disasters
will strike you
or your home.

God will command his angels
to protect you
wherever you go.
They will carry you
in their arms,
and you won’t hurt your feet
on the stones.
You will overpower
the strongest lions
and the most deadly snakes.

The Lord says, “If you love me
and truly know who I am,
I will rescue you
and keep you safe.
When you are in trouble,
call out to me.
I will answer and be there
to protect and honor you.
You will live a long life
and see my saving power.” 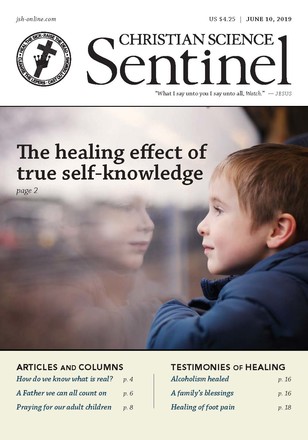 The healing effect of true self-knowledge

How do we know what is real?

A Father we can all count on

Praying for our adult children— a joyful endeavor

Answering the call from hungering hearts—wherever we are

We helped with our church’s Christian Science lecture!

'The crude creations of mortal thought ...'

A solid basis for emotional well-being