I can recall many moments of inspiration in my life. Trusting in God’s omnipotent presence in times of need has brought many healings and moments of grace.

One in particular keeps revealing itself in brighter and more profound beauty, bringing me a clearer understanding of God. It happened years ago, when I was relatively new to the study of Christian Science.

Over the next week, these questions were constantly in my thought. The answer came in an unexpected way.

A friend and I went to buy Christmas presents in downtown Mexico City. It was dark when we were driving back home, and we got lost in a neighborhood that had a reputation for being unsafe.

My friend was extremely nervous, almost about to cry. I was trying to calm her down, while “Blessed are the pure in heart: for they shall see God” kept coming insistently to my thought.

As we were about to turn onto a busy main street that would take us home, two young guys—one with a gun—began banging on the windows of my car, one on each side. Terrified, my friend opened the door and ran.

In the rearview mirror, I could see her running away from the guy with the gun, screaming for help. But the people in the cars behind us didn’t help. They just drove away, apparently too scared to get involved.

It was like a scene in a horror movie, yet I felt very calm. The Bible tells us, “There is no fear in love; but perfect love casteth out fear” (I John 4:18). I had learned from my study of Christian Science that God is Love and is everywhere present, so despite what was happening, I knew that in reality there was nothing to fear. Infinite Love makes and governs all, and does not include anything that causes harm.

The guy on my side of the car hit the window again and yelled at me to open the door. I thought the guys would get into the car and order me to drive to an ATM to get cash out of my bank account for them, and after that leave me somewhere far away and take my car. That was what usually happened in these situations. But I was not fearful.

I opened the door and saw that the robber was a teenage boy. I thought, “He could be my cousin.” I knew that in truth he was actually God’s child, the reflection of divine Love, and the only thing I could feel for this young guy was love and compassion.

I told him quietly, “It’s OK. Take whatever you want; just don’t hurt my friend.” He got in the car and said, “Give me your earrings and your watch.” I responded that I had neither.

In Mexico it is generally believed that when you do not have anything robbers can steal, it is worse for you—that if you don’t give them something, they will insult and beat you. But this guy appeared to be surprised at what was going on, as if he might be asking himself, “What am I doing?”

As I looked in the rearview mirror again, trying to find my friend, the guy simply left the car without taking anything—not even my wallet or the gifts.

I got out of the car in awe of what had happened. The thought that came to me at that moment was “I saw God!” I had seen evidence that God, good, is indeed the only presence, the only reality.

I looked for my friend and saw her standing at the corner. She was OK, and the other boy was nowhere to be seen. I called to her, and she ran back to the car and jumped in. Soon we were safely on our way home.

Seeing the young man as a child of God—as my “brother,” not as a robber—brought out the good in him.

I have looked back at this experience many times, and I always find new inspiration. It has become increasingly clear to me that what I experience is directly linked to my state of consciousness. I’m more aware of the need to choose what I accept as real—threats of harm, or God’s, divine Truth’s, presence and power.

The experience reminds me that God is Love and that we can prove this truth in our daily lives. Seeing the young man as a child of God—as my “brother,” not as a robber—helped to bring out the good in him. That would explain the expression of astonishment I had seen on his face. I have strong confidence that this event may have been life-changing for him as it was for me.

A few days ago, I was thinking about a statement Mary Baker Eddy makes in Science and Health with Key to the Scriptures: “If the Scientist reaches his patient through divine Love, the healing work will be accomplished at one visit, and the disease will vanish into its native nothingness like dew before the morning sunshine” (p. 365). Of course, that young man was not my patient, but it became clearer to me that it wasn’t a personal love for my neighbor that brought healing to that situation. Apparently, the influence of God’s pure love, which I was acknowledging in my prayer, was felt by this would-be robber. Man is the spiritual expression of Love, reflecting all of God’s pure and perfect qualities. Understanding in my prayer that we were in the presence of infinite Love brought a harmonious resolution for us both.

As I began to write the English version of this article, I had another “aha” moment. God is always listening! He was listening when I asked, “What does it mean to see God?” Love answered my question in the most wonderful way.

Adapted from an article published in the July 2005 issue of El Heraldo de la Ciencia Cristiana. 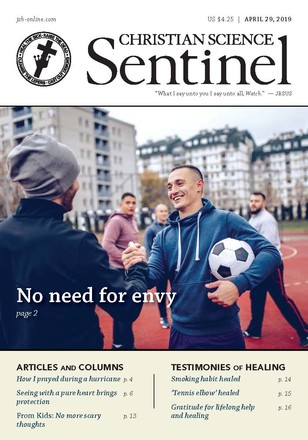 No need for envy

How I prayed during a hurricane

Seeing with a pure heart brings protection from assault and robbery

Trusting in God and caring for our children

Gratitude for lifelong help and healing

Unceasing prayer as a way of life