Several years ago I was given a substantial promotion overseeing the start-up of a new business location. The promotion involved my husband and me relocating to a new state. It necessitated selling our loved home and saying goodbye to a well-loved neighborhood. Nevertheless, we moved to the new city, where we found a home and my husband secured a new position in his line of work.

The start-up at this new location was very exciting. It included many new and rewarding opportunities for professional growth. However, the newness eventually began to wear off and was replaced by homesickness.

My husband and I missed our family and former home and friends. The new location just didn’t seem to be a good fit for us. A gloomy feeling was cast over our days and work. To top it off, I felt something shift in my back, which made sitting and sleeping very difficult.

I began praying about my back problem and very quickly realized that I had accepted the notion that I lacked the ability to adjust to this new location. Mary Baker Eddy, the Discoverer of Christian Science, writes in Science and Health with Key to the Scriptures, “Love is impartial and universal in its adaptation and bestowals” (p. 13). I reasoned that if divine Love was universal in its adaptation, then I too could be universal in adapting, because I am an expression of this divine Love. This idea comes from the Bible, which tells us that God is Love and that we are His children, created in His image.

It became clear to my husband and me that the first step we could take in adapting to our new location was to join and become active in the local branch Church of Christ, Scientist. We did this. Right away I began to get a very clear sense of the universality of the Church of Christ, Scientist. During services my thinking and prayers deepened and became much more far-reaching. I found that as I listened to the readings, I began applying the healing truths I was hearing in a much broader way than before. I began glimpsing more of divine Love’s universal, all-encompassing embrace of humanity.

During this time, I also became much more dedicated to the daily study of the weekly Bible Lesson published in the Christian Science Quarterly. Mary Baker Eddy states that this Lesson is one “on which the prosperity of Christian Science largely depends” (Manual of The Mother Church, p. 31), and it occurred to me that if I didn’t feel I was prospering in this new location, then perhaps a more diligent study of the Bible Lesson each day—and putting into practice the truths I was learning—would give me needed inspiration. This study of the Bible Lesson brought so much joy! It seemed I just couldn’t read it enough. The characters in the Bible became like very dear friends. Their stories filled me with insights.

After a few weeks, I began to have much more freedom of movement in my back. I knew I was demonstrating something of my infinite, God-given capacities and ability to adapt.

My husband and I became interested in investigating the bicycle trails in our new area. We were inspired to update the house we had purchased. Relatives began to visit more frequently. The feeling of gloom was dissipating. Within a few months the back problem was completely healed (that was five years ago).

Then one day I received a call from a business associate in our former hometown area. He asked if I was aware of a local position that had recently become available within the company. Within six weeks of this call, my company relocated us back to our hometown, and we sold the updated house for an amount far exceeding the price listed. Shortly after this, we purchased a home in the loved neighborhood where we had lived before the promotion.

Seamlessly, almost effortlessly, we returned to our former community just in time to help a daughter, who had recently announced her engagement, with her wedding planning.

I am so very grateful for the privilege of membership in the Church of Christ, Scientist. Church—“the structure of Truth and Love” (Science and Health, p. 583)—transforms and uplifts us, and adjusts us to each new adventure. 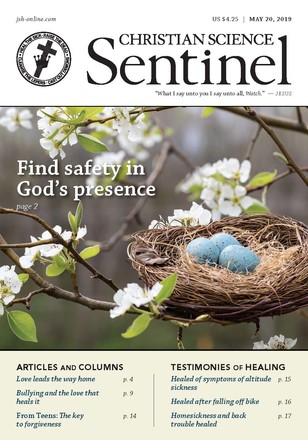 An answer to prayer

The key to forgiveness

Healed of symptoms of altitude sickness

Healed after falling off bike

Homesickness and back trouble healed

Photograph by Carol Lawrence | May 2019

The commitment that blesses

By Elizabeth Crecelius Schwartz | May 2019