To be beyond a shadow of a doubt. That’s a pretty high bar—getting beyond even a slight uncertainty. After all, the criminal justice system sets its standard at beyond merely a “reasonable” doubt.

We may think we know something beyond a shadow of a doubt. Nevertheless, even the most assured material sense sometimes gets it wrong. Consider criminal cases where individuals have been convicted by eyewitness testifiers but later evidence proved those eyewitnesses to have been mistaken.

The other day I saw an airplane take off. I watched it grow smaller and smaller as it moved farther into the distance. But did I really, without a doubt, see it become smaller? Why wasn’t I worried about all the people in the plane being crunched by an increasingly smaller plane? Of course, my human education helped me “see” what was really happening.

The point here is that what we perceive through the material senses is often illusive and uncertain. Yet, Mary Baker Eddy has given the world a whole fresh way to see beyond the uncertainty of the material senses by gaining an understanding of God, or Truth, that we can build our lives on. She has shared in her book Science and Health with Key to the Scriptures the divine Science revealed to her by God—the Science that is the Comforter Christ Jesus had promised would teach us all things. Mrs. Eddy was an inspired pioneer in following Jesus’ call to do the works that he did (see John 14:12), and she proved that it is possible not only to know without a shadow of a doubt what is eternally true and unchanging but also to demonstrate what’s true through healing.

We are capable of experiencing the kind of spiritual conviction that Jesus felt.

If we could go back to Bible days and interview the friends of the fellow with the withered hand before Jesus healed him (see Mark 3:1–5), my guess is that they would swear beyond a shadow of a doubt that the fellow’s hand was disfigured—that this was the reality. But we might also almost hear Jesus say, “I doubt that!”—and he took action on that doubt. He healed the man, proving the value of doubting the evil and embracing the good and the real.

The Master certainly wasn’t naive about human conditions, but he saw beyond those conditions to the present perfection of God and His creation. Mortals tend to doubt the actual presence of immortality. Jesus doubted the presence of vulnerable mortality. He practiced what he preached: “Be ye therefore perfect, even as your Father which is in heaven is perfect” (Matthew 5:48). A hand that was whole was a little closer to his vision of immortal being than a hand that was withered.

Here’s one of the ways Mrs. Eddy comments in Science and Health, the Christian Science textbook, on this question of doubt: “If thought is startled at the strong claim of Science for the supremacy of God, or Truth, and doubts the supremacy of good, ought we not, contrariwise, to be astounded at the vigorous claims of evil and doubt them, and no longer think it natural to love sin and unnatural to forsake it,—no longer imagine evil to be ever-present and good absent?” (p. 130).

Some would say that doubt can be a good thing. Some religious leaders have even emphasized this view. And in a sense, they make an important point. Human progress has at times rested on doubts. Maybe Henry Ford had doubts about whether a horse held the future for transportation. Clearly Jesus had doubts about some of the religious teachings of his upbringing.

We are created in the image of the one divine Mind, the one unlimited Ego, which is God.

But how do we get better at entertaining the doubts that are useful and rejecting the ones that get in the way of healing—such as self-doubt, or the fear that we may not be able to understand enough of the Christ, Truth, in order to heal a condition? The answer may involve examining whether we are thinking from the standpoint of the personal ego or the divine Ego, the mortal mentality or the divine Mind.

Sometimes the human mind feels completely certain. Other times it’s filled with questions. No matter how hard we try, though, we’ll never get a material mentality to think without “shadows.” Even if we have a sense that we’re absolutely certain, the mentality of mortals is constructed too much of shadows, doubts, and unknowns to get entirely beyond them.

Christ Jesus is the ultimate example of seeing, thinking, and feeling from the standpoint of the divine Ego. As the Son of God, he absolutely knew the supremacy of God’s goodness without a shred of uncertainty. Are we capable of experiencing the kind of spiritual conviction that Jesus felt? There’s only one way. It’s to stop believing in a mind apart from God, in the false mentality that harbors unproductive doubts. St. Paul points us to the divine answer when he explains that “we have the mind of Christ” (I Corinthians 2:16). That’s where no doubts exist. Instead of beginning with the human mind, we should acknowledge that we are not at all mortals with a limited mentality. We are created in the image of the one divine Mind, the one unlimited Ego, which is God. And the consciousness we have as God’s image is an expression of Spirit, divine consciousness. That’s the “mind of Christ.”

This “mind of Christ” is truly a state of enlightenment. Christly light brings brightness to our whole being. The more this light fills our thought, the less opportunity for doubtful shadows to develop. Christianity calls on all of its followers to live more and more of this Christly, spiritual, light-filled mentality.

Christian Science is the revelation that enables you to see with increasing clarity your original and eternal spiritual-mindedness. This is how you’ll find yourself following Jesus’ example of knowing what’s right and true without a shadow of a doubt. You will find more of what God gives you: certainty, humility, Christliness, healing. God gives you a full expression of the divine Ego—the selfhood without doubts. 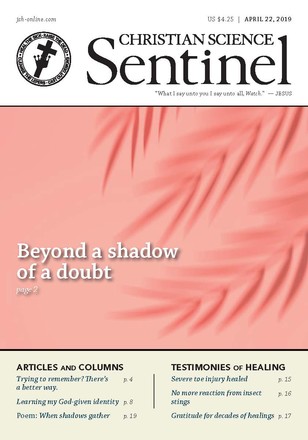 Beyond a shadow of a doubt

You don’t have to give in

Are you proud of me yet?

No more reaction from insect stings

Gratitude for decades of healings

Finding safety in our true environment