The world’s positive and negative opinions neither validate nor invalidate Truth and its inevitable triumph.

Before Jesus declared that it was not the flesh but divine Spirit alone that provides and maintains life, multitudes of people were following him. He had done much good healing and teaching, but even many of his early students were challenged by Jesus’ demand for a deeper commitment to spirituality, and their numbers soon dropped to only a handful.

From there, Jesus continued his devotion to being about his Father’s business, and his teachings again gained in popularity. Later, as he entered Jerusalem, crowds even cheered him and waved big palm fronds. Within the week, though, his popularity evaporated, and everyone, including most of his remaining disciples, abandoned both him and his mission.

Jesus’ experience toward the end of that week during the night before his crucifixion is enlightening. There in the garden of Gethsemane, he clearly struggled. Yet, it couldn’t have been because he feared for his own safety. He knew very well how to get away from those who would crucify him. Earlier in his ministry, when an angry crowd had attempted to throw him headfirst off a cliff, he’d walked calmly through them and away.

In Gethsemane he told his disciples, “My soul is exceeding sorrowful.” The account continues, “He went a little farther, and fell on his face, and prayed, saying, O my Father, if it be possible, let this cup pass from me: nevertheless not as I will, but as thou wilt” (Matthew 26:38, 39).

What was so troubling to Jesus? Could it be that he was concerned that the world would soon forget his message, his acts, his contributions? His adversaries wanted to kill him, but really their hope was to nullify and bury all the love, sacrifice, and patient teaching he had poured out into the world.

Jesus’ victorious resurrection soon followed. After those three days he’d spent praying in the tomb, he walked out with a perspective that was clearly different. His earlier concerns for his mission seem to have been left far behind. As Jesus charged Peter, “Feed my sheep” (John 21:16), there was a newfound confidence in God’s inevitable purpose—to awaken everyone throughout the world and all time to the healing, transforming, and cleansing power of God. Jesus realized that the will of God that he’d been humbly yielding to is a will so powerful that it is actually incontestable.

You and I can feel free to adopt Jesus’ elevated perspective and outlook and admit the inevitable progress of the law of God, the law of divine Love. Today, as in Jesus’ day, there may be times when scientific Christianity isn’t gaining in popularity. There may be other times when it obviously is. But as it was for Jesus then, so it is for us now: The world’s positive and negative opinions neither validate nor invalidate Truth and its inevitable triumph.

Was Jesus concerned that the world would soon forget his message, his acts, his contributions?

We can be encouraged by the fact that, when observed from the standpoint of God’s utter authority and purpose, the buffeting winds of human opinion can actually strengthen our trust in God, grounding it in an understanding of His wisdom and all-power. Note what happens to large trees when they are grown in a windless environment. Surprisingly, they become so feeble that they collapse from their own weight. But when exposed, as they grow, to moderate-to-strong air movement from different directions, trees grow deeper and more supportive root systems in response to these buffeting gusts.

In line with this fortifying and grounding process, the Discoverer of Christian Science, Mary Baker Eddy, makes this helpful observation: “The elbowing of the crowd plants our feet more firmly. In the mental collisions of mortals and the strain of intellectual wrestlings, moral tension is tested, and, if it yields not, grows stronger” (Miscellaneous Writings 1883–1896, p. 339).

Real strength and growth don’t come from avoiding windy challenges but from facing them. How do we do this? We are strengthened to the degree that we prayerfully behold ourselves and others expressing God’s perfection—and nothing less. Jesus presents the forever fact that accurately identifies every one of God’s children: “You therefore must be perfect, as your heavenly Father is perfect” (Matthew 5:48, English Standard Version).

We are each, like Peter, charged to feed our Father’s “sheep.” To do this job well, we have to be particularly clear about the basic nature of God’s children. Christian Science reveals that instead of being lost, ignorant, or obstinate, every single one is God’s flawless, spiritual creation. As we wholeheartedly love God’s perfect nature as expressed in man (meaning every one of us), especially during the “windy” times, we will be profoundly strengthened and will spend less time believing in sheep that are lost or flawed. As we practice doing this, we see more clearly that each individual is an expression of God’s perfection.

“I will follow and rejoice / All the rugged way,” Mary Baker Eddy prayed (“ ‘Feed my sheep,’ ” Poems, p. 14). Do we rejoice because the way is rugged and windy and because we can be proud that we worked hard all the way? No, we rejoice because we can glimpse in prayer that the sole state of being is actually the allness of perfect God, including His perfect creation. Truly, as Jesus put it, “It’s the Spirit who gives life; the flesh accomplishes nothing” (John 6:63, International Standard Version). In today’s opposing winds of popularity and negative opinions, beholding God’s flawless perfection in our fellow “sheep” from every corner of the globe lucidly defines our grounded love for the world. And it heals, definitively and permanently. 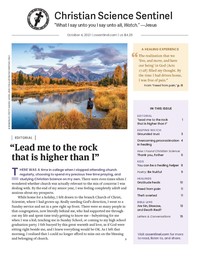