FEARLESS IN A DIGITAL WORLD

FOR MANY OF US, there are days when life seems obscured in a complexity of new technology, and its byproducts of ever–accelerating change and a glut of information and choices. "It's hard to say exactly when it happened," began one segment from CBS News' 60 Minutes, "but sometime during the past ten years, most of us involuntarily surrendered a big chunk of our lives to computers, and to other networking devices that contain computer chips. . . . We are becoming slaves to our own technology–addicted to and dependent upon all sorts of beeping, flashing gadgetry that is supposed to make our lives easier" ("Get Me The Geeks!" originally broadcast Jan. 28, 2007, updated Dec. 30, 2007).

It's not that people fail to recognize the ways in which innovation has made this modern life easier and more enriched, telescoping time and distance, opening up the world in ways their grandparents never dreamed possible. But as new phases of technological advancement become more and more compressed, there may be times when our free access to information and digital automation collapses into a burden of simply having more to learn or do or file. Ironically, this can even make a person feel more isolated than empowered.

It's not about simply digging in one's heels and bucking technological advancement (as if we could); there's far too much good in all the innovation. But for the sake of true progress and balanced living, it's important to winnow the chaff from the wheat. Bottom line: We never need to surrender even the smallest "chunk" of our lives to forces that dominate. In other words, it's not about having to endure a little bad along with the good. Centuries ago, Moses heard the divine Mind speaking to him this way: "Thou shalt have no other gods before me" (Ex. 20:3). Now more than ever, we need one totally good and all-powerful God in both our online and offline moments, along with a humility that echoes Jesus' words "I can of mine own self do nothing" (John 5:30).

According to the Science of Christianity, which Mary Baker Eddy discovered in the Bible and particularly in the teachings of Jesus, "man"—each and every one of us—was created as "the compound idea of God, including all right ideas" (Science and Health with Key to the Scriptures, p. 475). Eclipsing even the technology revolution, this spiritual identification is revolutionary throughout all time. We each exist as the complete embodiment of all the good, perfect, coherent ideas in the one universe of the divine Mind. This spiritual understanding always puts us in charge of the human condition because thought determines experience. Recognizing even a little of this fact—holding to it and discovering more of its implications—is prayer that makes us masters, not servants, of the electronic world. It exemplifies the Bible's statement that we, made in God's image, have "dominion over all the earth" (see Gen. 1:26, 28).

CONCEPTS LIKE THESE OFFER A MEANS BY WHICH WE CAN SAFELY AND CONFIDENTLY NAVIGATE THE REALM OF TECHNOLOGY AND INNOVATION.

Concepts like these offer a means by which we can safely and confidently navigate the realm of technology and innovation, all the while separating good from bad, order from chaos, truth from error.

This isn't the first decade in which stepped-up technological advancements have threatened to grow out of control. Along with the Industrial Revolution came the issues of staggering pollution, poverty, and child labor exploitation. The atomic age introduced the spectre of nuclear devastation. Societies could have attempted all-out retreats to the former ways, rejecting the innovation part and parcel. But there were more productive approaches—the evolution of intelligence, as a spiritual quality, ultimately prevailed over fear and resistance to the new and different.

More than a hundred years ago, the New York Herald asked Mary Baker Eddy about her thoughts on "the pursuit of modern material inventions." Her response was enlightening and comforting, indicating that placing trust in our God-given dominion frees us to embrace innovation fearlessly, without the concern that progress must involve tradeoffs, or that it might outpace itself. "Oh, we cannot oppose them," she answered. "They all tend to newer, finer, more etherealized ways of living. They seek the finer essences. They light the way to the Church of Christ. We use them, we make them our figures of speech. They are preparing the way for us" (The First Church of Christ, Scientist, and Miscellany, p. 345).

Recognizing that God has given us infinite intelligence enables us to be selective in where we search for and gather information. We can expect to have sound intuition about how to use technology advantageously—and to find it serving us only in useful, benign ways. There is nothing tentative or threatening about what is unfolding in the divine Mind. css 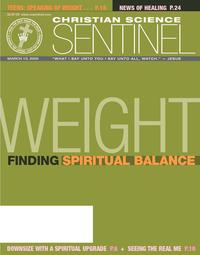