The cool breeze was on my face, and I was sweating as I skated hard to get back to my zone. After a long shift, I saw an opportunity to body check an opposing player who was carrying the puck. The second my shoulder made contact with him, I knew something wasn’t right. As I skated away, my collarbone hurt with every stride I took.

Because of injury protocol, I had to leave the ice to go to the dressing room and have the team doctor check me out. He told me that my shoulder was out of place and that I’d need to have it examined by another doctor after the game.

Since I wasn’t allowed to keep playing, I joined my mum in the spectators’ section, and she immediately started to pray for me. As a Christian Scientist, I’ve had other healings through prayer in the past, and I was grateful for her support.

Mum reminded me of a passage from Science and Health with Key to the Scriptures by Mary Baker Eddy that says: “Mind in every case is the eternal God, good. Sin, disease, and death have no foundations in Truth” (p. 415). It reassured me to realize that this injury had no basis, no foundation, because God, Mind, doesn’t know anything but health, harmony, and safety. And because I am Mind’s idea, that is all I can know, too.

The doctor was shocked and said it was like nothing had ever happened to my shoulder.

After the game, I had to go to the doctor, who said that I had a separated shoulder and it wasn’t looking good: three to four months until I’d be able to play hockey again. I was disappointed, but I was also even more motivated to be healed. I wanted to play in our game the following weekend against my hockey club’s rival, and I knew that was completely possible, because spiritual healing doesn’t take time—it just takes a shift in thought from whatever appears wrong to what Mind is knowing, which is all that’s true. I went home holding to the idea that separation, manifested in a shoulder or anywhere else, had no foundation in Truth, and I fell asleep with that thought.

When I woke up the next morning, I began my day by opening my copy of Science and Health to page 397, where Mrs. Eddy is talking about how to deal with the effects of an accident. This part stood out to me: “Declare that you are not hurt and understand the reason why, and you will find the ensuing good effects to be in exact proportion to your disbelief in physics, and your fidelity to divine metaphysics, confidence in God as All, which the Scriptures declare Him to be.” I prayed by affirming that I was not hurt because Truth, God, was my foundation, and I couldn’t be knocked down or shaken off of that. My shoulder started to improve from the moment I got out of bed. 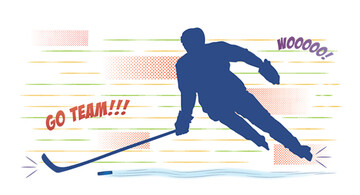 I went outside, and it was a fairly windy day. At first I was tempted to sit inside and rest my shoulder. But then I thought of the first part of the spiritual definition of wind in the Glossary of Science and Health: “That which indicates the might of omnipotence and the movements of God’s spiritual government, encompassing all things” (p. 597). It was a reminder to me that God’s complete control was encompassing me and always had been. So I decided to go for a walk, and it gave me a lot of time to be by myself and pray, which was exactly what I needed.

Just a few days later, I felt so confident about the healing that I decided to go back to the doctor to get my permission-to-play form, which was required by injury protocol. The doctor was shocked and said it was like nothing had ever happened to my shoulder. It was completely healed.

There was practice that night, and I was thrilled to go and to be back on the ice. I didn’t have a single moment of pain for the entire practice. The next Saturday we beat our rivals, which was a major bonus, but mostly I was just grateful for how quick and complete my healing was.

This experience was a huge breakthrough for me in my practice of Christian Science. 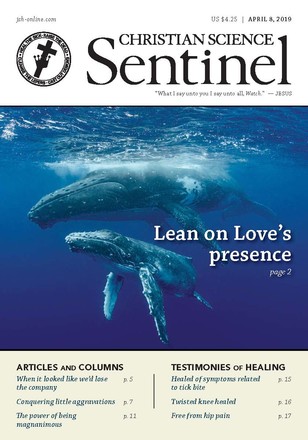 You’re not a counterfeit; you’re the real you!

The power of being magnanimous

Back on the ice

Seeking our own in another’s good