You would have loved my mom. She was a joyous, expressive woman with a great sense of humor—a fabulous cook and an artistic needlepointer. Above all, she was a great mother to me and my sisters. By that I mean she exemplified the best of what the world defines as mothering. Whatever problem we were facing, Mom was there, encouraging us, knowing we could make it through. When we weren’t feeling well, she stayed up and prayed for us. And however dire the situation, she’d always discover a way to help us “find the funny” in it. And yes, she’d never miss an opportunity to brag about us to anyone who would listen. But beyond those basics, she gave us something else—Christian Science. That’s what has stayed with me long after Mom’s passing. She knew that this Science of the Christ would provide the lasting and solid virtues of motherhood that would continue to provide care and counsel beyond what could come from family or friends.

Mary Baker Eddy, who discovered Christian Science and founded this magazine, was among the few thinkers of the 19th century who spoke of the motherhood of God. The term Father-Mother God, as she used it, denoted the tender solicitude and patience that the Almighty has for Her children. Eddy elaborated: “The true mother never willingly neglects her children in their early and sacred hours, consigning them to the care of nurse or stranger. Who can feel and comprehend the needs of her babe like the ardent mother? What other heart yearns with her solicitude, endures with her patience, waits with her hope, and labors with her love, to promote the welfare and happiness of her children?” (Retrospection and Introspection, p. 90).

To me that concept reinforces the notion that God doesn’t just create us, nurture us for a few years, then drop us off somewhere and say, “OK, kids, you’re on your own.” Her mothering continues forever as we realize our inseparability from divine goodness and guidance, no matter where we find ourselves.

That was emphatically true for me after I graduated from college. I joined the military and, within two years, found myself stationed in what by all appearances was the most desolate place on earth—Cua Viet, a remote Navy supply depot in Vietnam, three miles south of the DMZ, the demilitarized zone separating South and North Vietnam. When I first walked out of the transport ship that took us there, I felt so alone that I literally cried. My first night there, our base endured a sudden rocket attack from across the border, which was to become routine for the next several months. Every night we would go to sleep fully dressed, including combat boots, lying on top of our bed sheets—the easier to bolt from our huts and race to a protected bunker during the attacks. Life was, if not insane, very far from normal.

It may seem counterintuitive to be in a war zone and long for motherly comfort instead of a more fatherly sense of protection, but that’s what I craved during those months. And the relative peace of mind I was able to achieve at that time, I directly attribute to assurances of safety and security that came in the form of thoughts from God. If this was the Christ-spirit, known over the years as Immanuel or “God with us” (Matthew 1:23), then the manifestation I felt was definitely “Mom with us.” Years later, I would read Eddy’s words, which explained the Principle behind that divine presence: “How blessed it is to think of you as ‘beneath the shadow of a great rock in a weary land,’ safe in His strength, building on His foundation, and covered from the devourer by divine protection and affection. Always bear in mind that His presence, power, and peace meet all human needs and reflect all bliss” (Miscellaneous Writings 1883–1896, p. 263).

After my year’s tour of duty, I returned to civilian life physically unscathed, and I never manifested any of the post-traumatic symptoms that can often be a side effect from being in combat areas. Interestingly, in the ensuing years I’ve found myself in other “combative” situations, both in the workplace and family life. In every instance, the conflicts, small and large, were diffused or healed by this same dependable sense of mothering that I felt in Vietnam—a reconciling, harmonizing, forgiving power that comes directly from Mother-God.

Mothering––or any sense of caring and nurturing––isn't a personal skill. It's listening to and obeying divine direction.

I realize it’s natural to think of motherhood as mostly embodying the qualities of gentleness, compassion, tenderness, and care that are commonly associated with women. But I’ve grown aware that this may limit our concept of motherhood by overlooking accompanying qualities often labeled “manly.” For example, the right kind of caring can include an unwavering loyalty. Compassion can show strength and courage. Tenderness can come from mental toughness.

One incident in the Bible stands out to me as an example of expansive motherhood. It’s the story of the widow of Zarephath who was tasked with providing accommodations for the Hebrew prophet Elijah (see I Kings, chap. 17). She willingly followed this divine command, although it was obvious she had more pressing matters on her mind. Her food supply had dwindled to almost nothing, and in fact, she was about to fix a final meal for her and her young son. Not the best time to entertain guests, but—hello!—Elijah arrived nonetheless.

The first thing Elijah did was ask her for a drink of water. (Did I mention there was a drought in the land?) Then he followed up with a request for some bread. At this point, the widow explained her impoverished situation and her current need to cook a meal for her and her son. Elijah responded by telling her not to be concerned. (And, by the way, would she please bring him a little cake first!) In fairness, however, he then assured her that her needs would be met.

I love that this widow’s spiritual intuition to be obedient to these requests overrode any sense of burden or personal responsibility for mothering, which could easily have made her stubbornly resist. The result of her dutifulness, we’re told, was that her supply of meal and oil were constant and undiminished, and “she, and he, and her house, did eat many days”
(verse 15).

What a strong woman. What a great mom! This has emphasized for me that mothering—or any sense of caring and nurturing—isn’t a personal skill. It’s listening to and obeying divine direction, however difficult or radical that may be. Like that woman, we can glimpse the unfailing source of care and provision described in Science and Health: “Spirit duly feeds and clothes every object, as it appears in the line of spiritual creation, thus tenderly expressing the fatherhood and motherhood of God” (p. 507).

Like my mom, a good mother doesn’t raise her children to be forever dependent on her for their happiness and well-being. She wants them to be self-sufficient, capable citizens who, in turn, can help others. In the same way, Christian Science shows us that as we discover God to be the true and only source of protection, abundance, accomplishment, and purpose, we realize we already have all we need by virtue of reflecting Him. We’re perpetually nurtured and cared for—or should we just say, Mothered!

Norm Bleichman is a Christian Science practitioner and lecturer who lives in Newburyport, Massachusetts.

Send a comment to the editors
NEXT IN THIS ISSUE
Article
'Do you have a mother?' 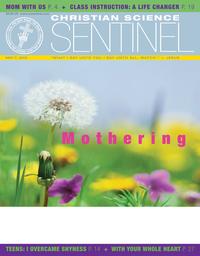