Why do some phases of sin and disease often seem more tenacious and difficult to overcome than others? Is evil really able to inject more power and tenacity into cancer than into colic? That is its claim, but its claim has no law of Truth to support it.

In a paragraph in the Christian Science textbook, "Science and Health with Key to the Scriptures," under the marginal heading "Diseases not to be classified," Mary Baker Eddy says (p. 176), "One disease is no more real than another." Heart trouble is no more the reality of man than hives, rheumatism than rickets, arthritis than asthma. The claim of the one evil, mortal mind, that it can classify its lying concepts, calling some mild and little-to-be-feared, and others serious and much-to-be-feared, needs to be seen as a lie about lies. But the lie of false classification is powerless to lift the lie of any disease or any sin above the dead level of the fictitious evil mind which is its origin.

Persistent advertising, dinning into the ears of people that a certain product will turn age into youth, or that some other product will satisfy all mortal cravings, has sometimes temporarily deceived many and secured large sales for the product advertised. So self-assertive mortal mind through persistent suggestion would falsely educate mortals to believe that some of its wares are Goliath monsters of disease or leech-like afflictions of sin. So long as a mortal consents to accept a fraudulent advertiser's statements as being true, he lays himself open to the consequences. So long as a mortal consents to accept mortal mind's false valuation and classification of its beliefs, he opens the door to suffering therefrom.

Mortals become fearful of the names given some diseases because other mortals are fearful of them. All the Israelites except David were afraid of Goliath. Why? Because they accepted his inflated valuation of himself. They believed he had the might and power he claimed to have. But David did not accept evil at its fictitious valuation of itself. Why not? Because he knew that all real power belongs to God, universal good, and that those who trust Him more than they fear evil can fearlessly face and overcome evil's braggadocio with the forces of God.

Mortal mind, the source of every material, evil thought and concept, would in a variety of ways give a build-up to many of its evil conceptions. It would establish a general belief among mortals in regard to some diseases, such belief often initiated and supported by medical opinion. It would even call one disease curable and another incurable, meaning only that from its wholly material viewpoint it sees no way to effect a cure.

Christian Science is greatly aiding its students to realize the simple truth that God, the infinitely good Mind and the only real cause, makes and knows no disease or sin. Because nothing can be real except what is of God's causing, no disease—be it classified by mortal mind as mild, intermediate, or serious—can be real, for God, good, causes no disease. Once we see that evil in its totality is entirely outside infinite Mind, God, we begin to see how impossible it is for any of its offshoots to breach God's infinitude and threaten or afflict man, His reflection.

The material mind may deceive mortals into believing that it makes good its claim that certain diseases are more serious, and so more to be feared, than others. It may say to the ear open to it, "Remember that your Aunt Eliza and your Uncle Horatio were afflicted with and died from this trouble." Or it may argue: "Medical statistics show this is one of the worst. Count the number of your friends who have passed on from it, and you'll see there is good reason for you to be afraid." Such is the devil's propaganda of deceit and falsehood.

The Christian Scientist turns on these lies with such questions as: Has disease or sin ever been known to or caused by infinite intelligence, God? No. Has a single one of God's eternal family, His children or ideas, ever been afflicted or ever died? No. Is it true that all reality is God, infinite Mind, and His universe of unafflictable ideas? Yes. What must I do then to lift myself above the mesmerism of these evil suggestions? I must use my God-given ability to know God, His allness, and the oneness of man, collectively and individually, with Him.

What argues so aggressively for the prestige of sin and disease is mortal mind. And what it argues with are material thoughts and material sensation. To what does mortal mind thus argue? Only to that which believes in and fears it—a negative state of thought of its own conceiving.

Let us see that in God and His universal, ever-present kingdom there is no mortal mind, no mortal personality to listen to, or to be made fearful of, or afflicted by the devilish lie that man is an afflictable mortal. Let us know what God causes each of His children forever to know: that nothing in error's totality can come into God's all-embracing universality. There divine Life and its manifestations presently and eternally safely dwell, unconscious of and unendangered by any phase of material belief, howsoever classified by thought that does not know God and His idea.

There is no qualification, no exception, in the Scriptural promise, "He sent his word, and healed them, and delivered them from their destructions" (Ps. 107:20). There is really no classification of disease or sin except the line of demarcation which spiritual understanding forever establishes between Truth and all error. This reveals that to God and His man there is no disease or sin of any type or degree, because God is All-in-all.

This article is included in:
2009 - ANTHOLOGY 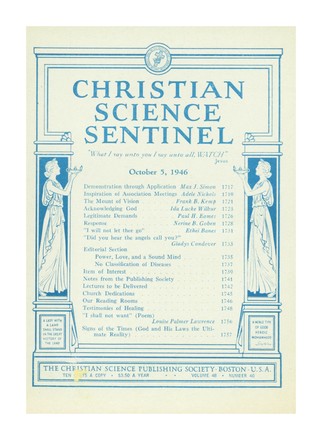 "I will not let thee go"

"Did you hear the angels call you?"

Power, Love, and a Sound Mind

No Classification of Diseases

Since the outbreak of war with...

With great joy and a deep sense...

"Let the redeemed of the Lord...