People in such circumstances are always tempted to ask: "Why me? What have I done wrong?" Perhaps the more pertinent question should be: "What have I done right?" And there is a higher law of justice that can remove these impositions of injustice—the higher law of God. As the Bible says, "Shall not the Judge of all the earth do right?" (Gen. 18:25). The Father-Mother of us all preserves His children through such experiences. Testing times often lead to convincing proofs of God's protection, and bring blessings not only for those involved, but also for the wider community.

Injustices proceed from wrong mental attitudes and misconceptions. These include envy, jealousy, a false sense of personality, ambition, lies, hatred of the truth, misjudgment, misunderstanding, and misinformation. But these are all impositions of the human mind (as opposed to thoughts from God, the divine Mind) that need to be destroyed so that everyone can be set free.

It's apparent that the Biblical figures mentioned allowed no resentment or self-justification to enter the picture. Gratitude and love apparently filled the consciousness of those individuals; otherwise, perhaps they wouldn't have come through their trials triumphantly.

Guilt is something that first appears in the Bible in the second chapter of Genesis, where man and woman are created materially. Personal power and influence are rampant in those verses, and the finger of blame points everywhere. A well-proven remedy is to recognize this Adam and Eve story as false and to focus instead on the first account in Genesis, where men and women were created in the image and likeness of God—blameless, upright, innocent, and guiltless. No false accusations exist in this primary account. There are no victims, no miserable sinners, no false accusers. In fact, no envy, injustice, or evil enters the discussion at all.

Today, many people who are treated unjustly feel that they are victims. One of the definitions of victim in Webster's dictionary is "a living being sacrificed in the performance of a religious rite." If someone has unconsciously accepted that we are victims of outside circumstances over which we have no control, this perception can be reversed by realizing the spiritual fact that God made us in His likeness. We reflect the divine Principle. God made no victims, only victors.

The dark, often hidden, attitudes that constitute the root cause of injustice have no power in the radiance of Truth's presence. No shafts of darkness can injure the light, and the sons and daughters of God live in the presence of His light and glory. Each of us belongs in "the secret place of the most High" where no false accusation can find us or touch us (Ps. 91:1). This is a mental dwelling place, filled with divine Love, where there is no room for false accusations and misjudgments to find a home. Claiming our unity with God, we can pass through our own lions' den, or burning furnace, or any other imprisoning or painful experience, and emerge enriched, inspired, purified. As Mary Baker Eddy wrote, "The very circumstance, which your suffering sense deems wrathful and afflictive, Love can make an angel entertained unawares" (Science and Health, p. 574).

The stillest place is in the eye of a storm. Similarly, right in the midst of difficulties, we can claim safety, immunity, from evil, and accept our divine inheritance as the loved children of God. This is where the Christ—God's tender presence—appears.

I remember reading about a competition some years ago in which artists were invited to illustrate the concept of peace. There were many entries, and it was expected that one particular painting would be the winner. It depicted a beautiful, tranquil scene—an idyllic cottage with smoke curling out of the chimney, a stream with cows drinking from it, and luxuriant woodland. However, the judges awarded the first prize to a painting depicting a raging torrential waterfall crashing down over rocks, with spray cascading everywhere.

At first it was hard to understand the judges' choice. But if you looked more closely at the painting, you could see, behind the waterfall, a small rock—and sitting on the rock a little bird, singing! The judges said that, for them, the idyllic painting depicted stagnation, whereas the painting of the waterfall represented true peace. They characterized peace as the ability to sit on your rock and sing, in spite of what is going on around you.

What an example! To me, this says that no matter what injustice is evident, each one of us, under all circumstances, has the ability to sit on our rock and sing praise for God's power and presence, joyously acknowledging our complete safety right amid the raging torrent.

To find my rock and sing in difficult situations, I've found it helpful to follow a few guidelines:

• Obey the First Commandment and acknowledge no other power or presence than God.

• Focus on Truth and Love, so that no fearful, resentful, retaliatory, or vengeful thoughts can intrude.

Injustice cannot survive long in the penetrating, permeating, and purifying power of the Truth. It inevitably yields to the understanding of divine justice. How reassuring it is to realize that this Bible benediction rests gently on every one of us: "The beloved of the Lord shall dwell in safety by him; and the Lord shall cover him all the day long, and he shall dwell between his shoulders" (Deut. 33:12). 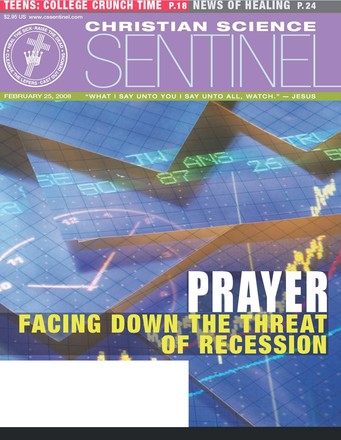 A LIFE OF GRACE

WATER SHORTAGES AND A DOWNPOUR OF INSPIRATION