I was raised in the Christian faith, but like a good number of Africans, I grew up in an environment where culture and tradition have a strong influence on beliefs. Before getting deeply involved in the discovery and reading of the Bible, I worshipped the ancestors and thought that my great-grandparents, who died before I was born, could make bad or good decisions about me.

A few years later, when I started to question the soundness of this tradition, I wanted to know the Bible teachings better. So I started to attend the Sunday services of a Christian church and to follow the guidance of the Word of the Bible.

One day, I made the decision to leave my native country, Cameroon, because my family and I were going through a difficult social situation. I had to move away in hopes of finding better employment somewhere else, in order to provide for them.

When I arrived in Mauritania, a country where the majority of the population is non-Christian, I quickly got in contact with the Christian community in Nouakchott, the capital city. A lot of foreigners live there, and as I got to know these people, one of them, from the Democratic Republic of Congo, gave me a copy of The Herald of Christian Science, French Edition. This was the first time I had read a magazine on spirituality, and I was interested right away. Without delay, I wrote to The Mother Church in Boston to get more information about Christian Science, and then I ordered a copy of the book Science and Health with Key to the Scriptures by Mary Baker Eddy (French translation).

After a perusal of the book, the chapter “Christian Science versus Spiritualism” caught my attention. On the first page, in an introduction to this chapter, Mary Baker Eddy reminds us of this Bible statement: “And when they shall say unto you, Seek unto them that have familiar spirits, and unto wizards that peep and that mutter; should not a people seek unto their God?—Isaiah [8:19]” (p. 70). I related very much to the teachings of this chapter, and they woke me up as to what I used to believe in the past.

Today, I’m a new man thanks to the teachings of Mary Baker Eddy. I thank God for giving me wisdom and His grace.

Since being introduced to Christian Science, I’ve been healed several times through prayer. The latest healing occurred in September 2015 after I was hit by a car. The car was not moving fast, but the driver was not paying attention as he was having a conversation with one of the passengers. He realized what had happened only when the other people in the car started screaming to make him understand he had knocked someone over.

When I got up, I saw that I had suffered only a few small scratches on my arms. The driver offered to take me to the hospital to make sure everything was all right. Since I didn’t feel any pain at that moment and was in a rush, I thanked him and answered that, in spite of the impact, I felt good. And I went on my way.

A week later, I started to feel pain in my right ankle from time to time. A month later, the pain got worse and became practically constant. I remembered then that my ankle had hit the asphalt when I had been run over by the car.

Right away I thought of healings I had experienced: the first one was of migraine seven years before; the second of back pain not so long ago. And I read this passage: “There is no pain in Truth, and no truth in pain; no nerve in Mind, and no mind in nerve; no matter in Mind, and no mind in matter; no matter in Life, and no life in matter; no matter in good, and no good in matter” (Science and Health, p. 113). I prayed with this, and the suffering disappeared completely in a few hours. I got up the following morning without any pain in my right ankle. The pain has never come back.

This is how finding Christian Science has been so crucial for me. I thank God and express my gratitude for Christian Science, which destroys material beliefs through the understanding of Spirit.

Originally written in French, this first appeared in the October 2016 Portuguese, Spanish, French, and German editions of The Herald of Christian Science. 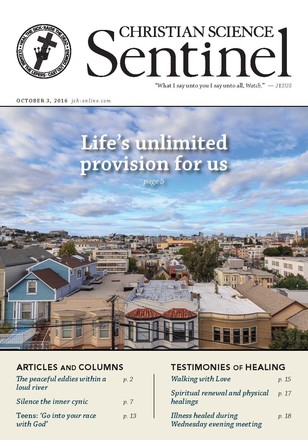 The peaceful eddies within a loud river

Life’s unlimited provision for us

A Sentinel finds a seeker for Truth

‘Go into your race with God’

By Holly Morris with contributions from Becky Stevens | October 2016

'But He whose Spirit searcheth deep...'

Spiritual receptivity and the longing for holiness