Our family had suffered some hard knocks. God had led us forward. Our Christian Science branch church and Sunday School had sustained us over and over again. God was our mainstay and my heart yearned to know that my youngest child in particular would be OK. This dinner conversation was an assurance that this teenager was learning to live the love of God he was being taught:

“Skander, have I taught you that forgiveness is important?”
“Sure, Mom,” he replied without hesitation.
“How did I do that?”
“Well, maybe I shouldn’t say you taught me. I just know that forgiveness is important.”
“So, you know for sure that it’s a value of yours?”
“Yeah, I know it’s my value because I try to do it, and in fact I enjoy doing it.”
“Can you give me an example?”
“I can’t think of one now.”
“Well, the fact that you enjoy doing it is really good.”
“Mom, what’s making you talk about this?” (with genuine concern).
“I just read an article that said it’s important for parents to teach forgiveness because by the time kids are teenagers it’s usually hard for them to forgive.”
“I don’t agree with that at all. In fact, I think teenagers are good at forgiveness because teenagers know the importance of cutting people slack.”
“Why? Because teenagers know they need slack more than others?”
“I guess that’s a way of saying it. I think the problem is self-righteousness—feeling so much better than anyone else. If somebody doesn’t think they need slack, they think other people shouldn’t get a break either.”
“Maybe that’s how I’ve taught you forgiveness—you’ve needed to forgive me for my mistakes.”
“Mom, your mistakes aren’t any worse than mine” (with great tenderness).

It was one of those dinner table conversations that worked. I remember feeling after this that even though my son had many more years of schooling to come, I could glimpse his budding maturity and thoughtful spirituality. It tempered my concern about whether or not he could overcome the difficulties of his childhood, and being raised by a single mom. His joy in practicing forgiveness promised he would be able to think beyond his circumstances and practice the resilience that is a necessary part of life. He had learned that the source of the good in his life was God’s ongoing love.

From my own experience, I know human life can be a mix of great tragedy and great beauty. I’ve found that sorting through the best and learning from the worst is essential to progress. We can’t afford to allow the heartaches to overshadow the beauty. Forgiveness, based on Christ Jesus’ example, is a foundational way that we stay out of the chaos of mortal mind and remain committed to the good.

One of the things that makes us withhold forgiveness is that it doesn’t always seem to affect other people’s behavior. We need to remember that the motive for forgiveness is to honor God’s harmonious government of the universe. Doing this in the face of discord is especially powerful because it prepares thought to admit the goodness that overshadows the sin.

Christ Jesus must have foreseen the importance of tenacity in forgiveness when he counseled Peter to forgive someone more than once, more than ten times, even more than a hundred. Jesus’ demand was to forgive 490 times if necessary (see Matthew 18:21, 22).

One of the basic tenets of Christian Science points to the power source. The first part reads: “We acknowledge God’s forgiveness of sin in the destruction of sin and the spiritual understanding that casts out evil as unreal” (Mary Baker Eddy, Science and Health with Key to the Scriptures, p. 497).

Our great support in this work is that God is the power behind forgiveness. In the practice of forgiveness, it is God’s view of creation that is asserting itself. God sees man as unblemished, and the omnipotence of God commands creation in a way that the divine reality is known. This divine influence neutralizes the resistance to forgiveness. God makes known the innocence He has established in each of us, as the very image and likeness of His own being.

Forgiveness is a foundational way that we stay out of the chaos and remain committed to the good.

Winning this conviction through our own prayer is an essential way of supporting another’s progress. When we can make the separation of sin from someone else, we’re embracing the individual in a mental atmosphere that makes it easier for that individual to make the mental shift to their own freedom. It becomes easier to see authentically how God upholds the perfection of creation.

Innocence is the foundational fact of man’s being—of your real being and mine. Our relationships with others must be based on this fact in order to experience the full blessing of knowing each other. God has endowed each of us with the capacity to defend our own and others’ freedom to be our God-expressed selves.

Even after aligning our thought to these spiritual facts, it may not bring an immediate change in the sinner. But instead of feeling frustrated by someone’s lack of improved behavior, the patience we express is anchored in the certainty of their right to be free.

Compassion grows as we realize that the sinner is the greatest sufferer. The second part of the tenet on forgiveness in Science and Health makes this point: “But the belief in sin is punished so long as the belief lasts” (p. 497). It is hell to believe oneself to be a puny, worthless mortal, trapped in carnal instincts. It is heaven to discover in ourselves the capacity to be generous, to express to others the love we know firsthand from God.

The cruelty, careless disregard of others, the ignorance of living self-centered lives is the agony of the dream of life in matter. This dream must yield to the reality of the kingdom of God, Spirit, Love, which Jesus assured us is here and now.

True forgiveness recognizes that sin—sensuality, willfulness, greed, or some other error—never has been a part of God’s man. So it can’t be part of the individual we are being asked to forgive.

Whatever effort we make on behalf of others, it pales before the blessing they are designed to be. The sin is never greater than the divine purpose of showing forth God’s being. Forgiveness says: “I will not wait for you to be worthy of my love. Right now, I will love you as God does, forever. And I will defend your capacity to love, and to be who you truly are.”

Lois Carlson is a practitioner and teacher of Christian Science who lives in Chicago, Illinois. 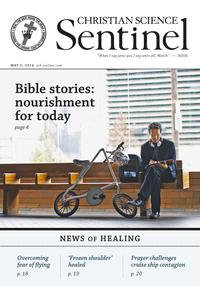