During my college years, I began to study Christian Science and married the man who introduced me to this wonderful study. Over the years we have been blessed with numerous healings.

For many years, I suffered from secondary infertility; that is, the inability to conceive a second child. Through the years, I watched three of my sisters experience many of the same symptoms I suffered from. They turned to infertility treatments and surgery one after the other—some with success and others with none. As a Christian Scientist, I wanted to take a different approach.

Whenever I worried that perhaps it was not right for me to have another child, I turned to the Bible and found reassurance from healings of infertility. In fact, the blessings of motherhood are completely supported in the stories of Hannah (see I Samuel 1:1–22) and Elisabeth (see Luke 1:5–25), as well as in Jesus’ love for little children. Yet, I suffered two apparent miscarriages and two false positive pregnancy tests.

At one point, 13 years after my first child, I prayed to be led to a Christian Science practitioner to work with. A name came to me of someone across the country, whom I had never met; yet the direction was so clear that I called.

We talked at some length, and he agreed to take my case. I conceived that very month, and you might think I was overjoyed, but I was not. I feared another miscarriage and consequently relied heavily on the practitioner’s calm reassurance that all would be well.

At this point, I was not praying for myself with much confidence and was struggling to stay calm. I felt more wonder for the practitioner’s confidence in God’s dominion, and gratitude for his spiritual conviction helped me find my way in prayer.

When I attended my first appointment with the obstetrician, he found a problem. He kindly explained to me that I might not carry this child to term, and that if I experienced any unusual symptoms, I was to call his office immediately. I quietly sat and listened to him, but never asked him to name the difficulty, or for more details, and he did not offer any.

I went home and phoned the practitioner. He explained that all of God’s ideas are perfectly cared for and have everything they need—and that nothing could challenge that God-given dominion. He talked quietly and with such calm that I finally began to have some confidence that with God, all would be well.

During the fifth month, I began to experience disturbing symptoms, but instead of calling the doctor’s office, I called the practitioner. I do not remember anything of our discussion, but I distinctly remember his calm demeanor. This was the beginning of my ability to truly rest in God’s care. After three days, all returned to normal, and the pregnancy proceeded unimpeded by any further difficulties.

As my time drew near, the doctor informed me that under the circumstances I should expect the labor to be more like a first-time labor. I was stunned and began to dread the day because my first labor had been very long. I turned immediately to the biblical promise: “Shall I bring to the birth, and not cause to bring forth?” (Isaiah 66:9), and finally with great confidence I prayed with this verse.

I prayed to understand deeply that God was in charge of His creation, and that material law had no authority. The ninth month was filled with consecrated prayer that our Father-Mother had conceived this child in eternity as His spiritual idea, and that this child, His idea, was already complete and was safely in God’s encircling embrace. I also returned to a prayer that comforted me when my daughter was an infant—that God is my Mother as well as hers and is taking care of both of us.

When my time came, the water broke late one night, but labor did not begin. The doctor was concerned and asked me to come to his office the next morning.

At the office, my husband, who by then was accustomed to talking to the doctor about Christian Science, asked him what needed to be dealt with so we could pray about it. The doctor replied, “Well, the contractions could be more productive.” He told me to go home and rest—he did not expect the baby to arrive for another 24 hours. We left his office and called the practitioner on the way home. By the time I got home, I was in full labor.

We had prepared for a home delivery. According to procedure we called the office, and they sent a midwife to our home. She was not there long before she called the doctor and informed him that he needed to come immediately. The birth was proceeding quickly. Our little boy arrived in less than three hours, completely safe and healthy.

Words simply are not enough to express our profound gratitude. My prayer that God is my Mother and our children’s Mother has never ceased to this day. In fact, it became our custom to tell our children to call us Mom and Dad. They have only one Father-Mother and that is God. 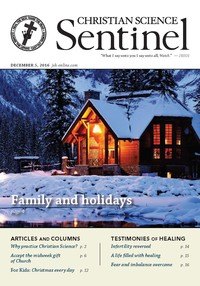