The vitality of Christianity is remarkable. It can be legally repressed and still it survives. Many of its adherents can fall short of its moral and spiritual ideals, yet others will emerge with new conviction of God's grace and love.

I was reading a single New Testament Gospel to see what would cause such reemerging spirituality and vitality.

Clearly, the Gospels are moving documents. Christ Jesus said provocative things, especially in light of the political and social conditions of his day. Often the response of the people was provocative and brings to mind modern scenes when thousands of people join together in public squares to witness a shared call for freedom. Yet as powerful as Jesus' words were, it wasn't simply powerful words that moved so many hearts. The spiritual understanding of man's oneness with God impelled the healing works of the Master and infused his words with the power of Truth.

Then I read only the accounts of his works—the healings and other events often called miracles. This time as I read I tried to see what would happen if those sections were erased that described these events. What would have been left has been described by some critics as debatable historic detail and as wisdom writings similar to those of other ancient philosophers.

The fact of the matter is, however, Jesus' words and acts are inseparable. This is what made them unique. If an attempt were made to separate the two, neither taken alone would soar to divine heights as they do when taken together. The New Testament book of James says it quickly and to the point: "Even so faith, if it hath not works, is dead, being alone." James 2:17.

The healing works of the Master aren't the only thing that would disappear if you were to permit such erasures. The moral and spiritual force of Christianity could be lost sight of as well. The power of unconditional love between God and His creation vanishes from the text. All the vital goodness that we cherish, and that we know is essential to life, civilization, and progress, is drained away unless we have the evidence of the radical activity of God's healing and regenerating presence.

Just as a censor's edict in some Orwellian state can't erase the yearning for freedom, dignity, and self-government, so too, society's casual dismissal or ignorance of Christian healing can't do away with the spiritual reality of our own selfhood as God's expression. It is because of this reality that the healing acts of Christ Jesus can't be blotted out of minds or hearts.

You see, it's not Christian Scientists who make spiritual healing an issue. Not really. Healing and the reality of God are rooted in the fundamental nature of all people's lives.

Jesus' parable of the prodigal son in the Gospel of Luke, of course, relates to anyone's struggle to know divine Truth. Our lives are complex, and we don't easily plumb the depths of our own spiritual nature or needs. Eventually, however, the knowledge that we are the spiritual sons and daughters of God shines with such brilliance that we turn homeward, too. And we come to realize that God is our Life, Mind, and Soul.

To expect and to wait for the dawning of this spiritual understanding in ourselves and in others is to find out something of what unconditional divine Love is. This is an active, not a passive, waiting. It develops compassion and opens to us the power of God's divine law, the kingdom that Jesus said already lies within us.

This active spiritual law is what gives scientific Christianity its power of reemergence and endurance—its power to heal sickness and to save from sin. These "miracles" are the outward change of body and mind that indicates an inward event, a spiritual creation, that makes us "new creatures in Christ," to use language like the Apostle Paul's. The Discoverer of Christian Science, Mrs. Eddy, described the underlying event this way in Science and Health: "To-day the healing power of Truth is widely demonstrated as an immanent, eternal Science, instead of a phenomenal exhibition. Its appearing is the coming anew of the gospel of 'on earth peace, good-will toward men.'" Science and Health, p. 150.

In this light, we can see why New Testament acts of healing can't be erased. The promise simply won't go away; humanity's spiritual hunger won't disappear. God remains central to our lives. This is why we have spiritual hunger; this is why it's inevitable that we find the answers we seek in order to understand the spiritual law that impels what may seem miraculous to us now. Christian healing is the natural outcome of understanding man as the expression of God's being.

Then spake Jesus ... unto them, saying, I am the light of the world: he that followeth me shall not walk in darkness, but shall have the light of life. 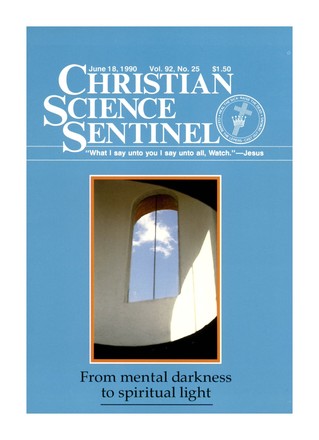 "A sense of God that spoke to the heart and mind"

A HEART FOR COMMUNITY

Gaining a deeper understanding of God

No erasing the record

To be freed of what is considered a severe physical condition...

It was the day before my flight home after a thoroughly successful...

In early childhood I was enrolled in a Christian Science Sunday School,...

Some years ago while I was measuring the dimensions of...

Our family was preparing to return to our home from a vacation...

By Jo Ann Gerber with contributions from Deonna Gerber | June 1990