No longer busy and tired

A few years ago, I was set to finish my last semester of graduate school. While working full time, I had been taking classes at a university near where I live. But I needed to finish my degree in another state a few hours away by plane, while continuing to work on my job.

As I moved away from my home, the challenge ahead seemed daunting. It would be a great sacrifice for my wife and our two young boys to see me only once every two months.

The first day, I met with my advisor, and he asked how many course hours I would be taking and when I expected to graduate. When I told him my plan, he said the number of hours exceeded the maximum allowed, even with special permission, so it was impossible. I asked if there was any way I could talk with the dean and be allowed to take the extra load of hours in order to graduate in one semester. He said he didn’t think so but would call.

This left me a moment to pray. I affirmed that God, omnipotent Mind, was governing His entire creation harmoniously, so the outcome in this situation wasn’t really up to me or the dean. God’s wisdom would prevail. If it was right for me to complete the degree by the end of the semester, then it could not be blocked.

My advisor called the dean and vouched for me, and after a few minutes he got the OK. I was grateful—but then I realized the work was about to begin.

I had already been praying to prepare my thinking for the months ahead. Prior to leaving home, every time I thought of the upcoming semester, I would turn to God in gratitude and acknowledge that He was providing, and always would provide, all the ability I needed to fulfill my God-given purpose. The true purpose of each of us is to bear witness to God’s ever-presence and all-power. This is man’s spiritual birthright as the image and likeness of God.

I made a promise to myself that I would not think of myself as “tired” or “busy” under any circumstances.

The day I left home, a friend from church reminded me of Mary Baker Eddy’s metaphysical definition of day in the Glossary of Science and Health with Key to the Scriptures. A statement in this definition reads, “The objects of time and sense disappear in the illumination of spiritual understanding, and Mind measures time according to the good that is unfolded” (p. 584).

I held to that idea, praying to see more clearly that God is the infinite, inexhaustible source for all of man’s capabilities. I made a promise to myself that I would not refer to myself as “tired” or “busy” under any circumstances, because describing myself in those terms would be like telling God, “No thanks; I don’t want more opportunities to express good.” I decided I would remain firm in trusting God’s guidance.

With me gone, the first week was challenging for our boys, and they acted out at school. I decided to fly back that first weekend to let them know they were a priority and were loved. Certainly I knew that even if I could not fly back, all was well, because their true, divine Father was always with them. But I wanted to reassure them that family was not going to take a back seat.

As it turned out, I also needed to be back home for my job quite often throughout the semester, so I wound up making the trip all but two weekends over the four months. I was so grateful for the inspiration God unfolded for me each day, and I was encouraged by how well things were working out. After a couple of months, I realized I had been getting only about four hours of sleep a night, but I was feeling fine.

Then, a week later I had a physical challenge that allowed me to sleep only an hour or two a night for about ten days. During this time I spent much of the night studying and praying, and I enjoyed this quiet time listening to and talking with God. But even though I was making progress toward healing, I wasn’t getting much sleep. However, I remember thinking that if I was able to be fine with four hours of sleep, why would it be any different with two hours? Was there any power in these numbers?

Science and Health tells us on page 519: “God rests in action. Imparting has not impoverished, can never impoverish, the divine Mind. No exhaustion follows the action of this Mind, according to the apprehension of divine Science.” I thought of the power and certainty of that statement. I knew divine Mind was working in me, and I could trust that Mind was also giving me rest.

I knew divine Mind was working in me, and I could trust that Mind was also giving me rest.

I could never have predicted how God would take care of us, but He surpassed every expectation and hope we had. As the semester progressed, I was able to meet or beat every deadline that came along for both work and school. I also taught my first swiftwater rescue course as an instructor, completed the coursework and training to become an avalanche instructor, ran every morning, and completed 19 hours of graduate coursework, along with a thesis. During this time, my family felt no burden, loss, or stress.

Summer was the busiest season in my job as the director of facilities at a camp, and a few weeks after graduation, I was back to putting in one-hundred-hour workweeks. At first I was concerned that I couldn’t keep going, but whenever a doubt crept in, it was always followed by the question, “Did God tell you that?” My answer was, “Certainly not!” Even though sleep was pretty scarce, the spiritual fact was that Mind was expressing action and rest in me.

After the summer, I started a new job as the academic director for a private high school. I must admit that for a few weeks, I was worried that I could not keep up the pace. I even started to tell a few people that I was really tired. But by giving in to the lie that man is subject to limiting, material health laws, I was arguing against my interests and against what I knew to be true of man as God’s unlimited, spiritual idea.

It was not until I began getting questions from a few students about how to manage time and handle fatigue that I realized I was telling myself I had reached the end of the good, the end of the energy God was providing. That snapped me out of the lie! I regained my spiritual motivation to stop using the words tired and busy. Soon I was again able to focus on what I was doing, and I went back to having complete freedom from fatigue.

This was about four years ago, and my work pace has increased along with my responsibility. Yet I continue to be healthy and feel fine. I am so grateful for the lesson that we don’t need to be limited by lack of sleep or weighed down by demands on our time and energy. Christ Jesus’ promise in Matthew 11:28, “Come unto me, all ye that labour and are heavy laden, and I will give you rest,” has been abundantly fulfilled in my life. 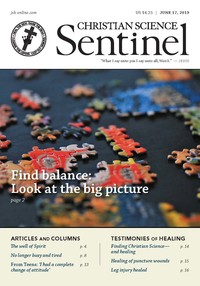