In the year 1918, during the World War, when I was a soldier at one of the United States camps, a Christian Science worker presented Science to me in the form of a gift copy of the textbook, "Science and Health with Key to the Scriptures" by Mary Baker Eddy. I was not ready for it then, and only read a line or two here and there. The seed was planted, however, although it was not until 1924, when I reached the "extremity" which was "God's opportunity," that it took root in my consciousness.

By indulging in heavy drinking, gambling, smoking, and many other vices, I had reached the depths of despondency and despair, and I had an unceasing desire to end it all. I thought that this could be done by committing suicide, but I had a horrible fear of death. Torturing questions would constantly come to me day and night: "What are you here for? Why do you exist? What is it all about?"

One night, while I was under the influence of liquor and aimlessly wandering around the streets trying to get up nerve enough to commit suicide, I walked into a lighted edifice where a lot of people were entering. During the course of the evening, when I learned it was some sort of religious gathering, I did not like it so well, but reasoned it out with myself that it might be better to stay rather than to walk out alone. I heard several people speak of being healed of sickness and other things, but though it did not apparently make any impression, and I seemed to forget all about it during the rest of the week, the following Sunday evening found me in the same edifice with a much clearer thought, because I was not under the influence of liquor this time. The edifice was, of course, that of a branch Church of Christ, Scientist.

From this point on, I rarely missed a Sunday service or Wednesday evening meeting, and I attended one or more Christian Science lectures a week. I have made constant progress since then, for which I am very grateful, even though my progress has seemed rather slow at times.

Shortly after starting to study the textbook, I was healed of a serious heart disease, which was the result of wrong thinking and living. Since that time I have been healed of stomach and bowel disorders, pneumonia, severe nasal hemorrhage, and many other diseases. Smoking, drinking, gambling, and other lustful appetites, were healed before I was freed from the pains of the flesh.

I am most grateful for our beloved Leader, Mrs. Eddy, who made it possible for me and for all mankind to understand and be at one with God and His Christ. I am very grateful also to the practitioners who so lovingly and patiently helped me along the way, and to my loyal teacher, who so thoroughly expounded and elucidated the life and works of Mrs. Eddy. Membership in The Mother Church and in a branch church has also brought me much joy and happiness, as has the privilege of serving in some of the various activities of church work.— 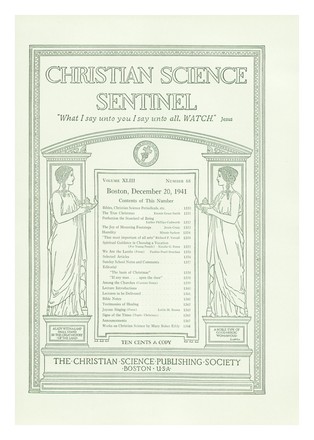 Perfection the Standard of Being

The Joy of Mounting Footsteps

"That most important of all arts"

Spiritual Guidance in Choosing a Vocation

We Are the Lambs

In an article which appeared in your paper recently,...

The Knoxville Journal recently carried an article which...

"The basis of Christmas"

It is with sincerest gratitude for Christian Science that...

During a period of twenty-seven years Christian Science...