I have seen God’s unwavering, unstoppable love expressed in many ways, not the least of which was a healing I experienced in gaining freedom from addiction to tobacco.

As a young adult I toyed with tobacco products such as chewing tobacco and with smoking cigarettes and cigars. In surreptitious moments after school, I would experiment with them so I could find my place among the “cool kids.” And I found that my initial distaste for these products disappeared. At first, I could stop and start up this habit any time I wished. For years I went without any tobacco at all, and then would take up some form of it and use it until moved to put it down again. This occurred several times and I was very smug about the ease with which I could “quit.”

But one time I picked the tobacco products up and found that I could not quit. Never before had I felt defeated and enslaved like this. Despite my best efforts to shake the habit, nothing worked. I tried a variety of over-the-counter aides: nicotine gum, chewing gum, and other patent concoctions. I finally determined that I was in a serious mess and that I had better get down to praying about it.

I’d grown up going to Christian Science Sunday School and was aware that what I was doing wasn’t helping me be a better person and was a kind of rebellion. I also knew that turning to God could free me. So I prayed. And I prayed, and prayed, and prayed some more. When I look back on this, I can see how my prayers were a bit formulaic and trite. I’d simply repeat some spiritual truths that had worked for me previously, and this didn’t require much spiritual stretching or growing on my part.

Many months went by and the tobacco habit didn’t budge. Fear continued to plague my thoughts, despite my efforts to pray. I was confused and chagrined. I had been witness to Christian Science healing in both my home as a child and in the lives of friends from church and summer camp. I had been blessed by having had healings of other problems such as sickness and school troubles. I knew that prayer as Christ Jesus taught it is effective. So what was stalling the healing, I wondered?

Some time earlier I had heard a testimony that helped me to work through the impasse. I don’t recall just where I ran across it, but it was in a Christian Science periodical or audio recording. It was about a man who had faced income issues. He felt that he’d done all the right things, taken all the correct human footsteps, prayed as he had been taught in Christian Science, in the way that had worked in previous situations, but he had failed to find healing. He resolved to sit down and pray until there was clarity about a solution. So he sat for hours, praying and reasoning spiritually about God and his relationship to God. It got dark outside, but he didn’t even turn on a light; he continued to pray and not be distracted. Shortly after, there was a neighbor at the door with a basket full of food, offering it to him. This was the first indication that the mesmerizing picture of lack was broken, the man happily accepted the offering, and the healing did progress and was complete.

I took great heart in that story and admired the man’s strong stand. It was not human willpower that he exhibited, it was what I call spiritual relentlessness—absolute faith and trust and assurance in God and the truth about his relationship to God. This uplifted me.

I rededicated myself to finding an answer to the tobacco addiction. I opened my thought a bit to let God guide me as I pored over the Bible and Science and Health with Key to the Scriptures, by Mary Baker Eddy, and her Prose Works, too. Mrs. Eddy was known to open her Bible “randomly” to just the right citation. To human sense this might seem like coincidence, but the truth of the matter is that being quiet in thought opens the way for us to turn to the passages that best suit our needs. I had seen my parents and friends and others do this very thing, too.

So I began to do this on a daily basis. I would do my regular studying of the Christian Science Bible Lesson and have a little while of quiet prayer, and then would pick up whatever book I was led to pick up, be it the Bible, Science and Health, or some of Mary Baker Eddy’s other writings, and open it with expectation and gratitude, even before I saw what my eye and thought lighted on. On one occasion this passage from Retrospection and Introspection stood out to me and held my attention for a day or two. It reads, “The human history needs to be revised, and the material record expunged” (p. 22).

This really brought me up short. Expunged is a word that means to completely erase something. Obliterate it. Make it disappear so that it never shows any evidence of having been. Pretty serious action. Could I really expunge that I was stuck using tobacco and couldn’t quit? That gave me lots to consider.

I began to consider that my freedom from this addiction was connected to my grasping more clearly the truth about my preexistence with God.

Another one of the Christianly scientific gems that I was guided to by prayerfully, expectantly opening the books, is found in Mrs. Eddy’s Miscellaneous Writings 1883–1896. It states, “The meek Nazarene’s steadfast and true knowledge of preexistence, of the nature and the inseparability of God and man,—made him mighty” (p. 189). Clearly, this understanding of the fact that God’s children have always been with Him was a key element in Jesus’ spiritual strength. I reasoned that this therefore could be a strength for me. Another biblical message regarding preexistence came to thought. It appears in the book of Jeremiah, “Before I formed thee in the belly, I knew thee; and before thou camest forth out of the womb I sanctified thee” (1:5).

So, I began to consider, in earnest, that my freedom from this addiction to tobacco was connected to my grasping more clearly the truth about my preexistence with God. Armed with those Bible passages and the fact that the Bible and Science and Health both repeatedly instruct us that we are eternal and reflect God, I began to reason in this way: “If I always have been, and am, and always will be, always with God, in Him, safe and secure, and reflecting Him, then the tobacco use and, indeed, any willful or disobedient behavior, can’t really belong to me, as God’s child.” The two different states I faced—one of willfulness and one of naturally reflecting good—are clearly diametrically opposed. So which one was real?

The good and eternal was the real “me.” But how could I accept that? I didn’t feel worthy. And then I caught myself and thought: “Of course I’m worthy! God’s creation, including me and all my brothers and sisters, are all worthy.” A passage in First John puts it this way, “Behold, what manner of love the Father hath bestowed upon us, that we should be called the sons of God” (3:1). The thought that said I wasn’t worthy was simply a devilish suggestion that I was a failing mortal. I didn’t have to buy it, and I made a conscious decision to reject any thought that came that said I was addicted, unable to quit tobacco, or less than lovely, loved, or loving.

I prayed to know that since I had always been with God, Spirit, my true being was spiritual and could never be touched by a material element. I couldn’t be trapped, or damaged by materialism, since God’s creation is entirely “good,” as stated in Genesis 1. That was the truth about man’s innate goodness that was being awakened in my consciousness. This spiritual truth was “evicting” the picture of a mortal man who used tobacco and was struggling to stop. In a broader sense, this truth countered the root claim that matter could have power and be addictive to begin with—regardless of the apparent initial pleasure, and regardless of what form the matter took. Divine Truth was helping me to see that this problem of addiction could truly be expunged for all mankind.

I committed wholeheartedly to really exploring all the facets I could on these ideas about my, and everyone’s, preexistence and current existence and eternal existence with God, and just felt within me that this was the answer I’d been looking for! I had been convinced that I was mortal and needed fixing, when the needful thing was in understanding that I had never been outside of God’s government, and could never be.

A couple of days after praying about the preexistence concept, the yearning for tobacco use just vanished. There was no angst or trauma. No willpower, no artificial method or product was used—the realization of my oneness with God simply became deeper in my thought than ever before. That’s what healing is, the revealing of a clearer sense of spiritual truth to one’s consciousness and this new glimmer of “light” dispels the gloom and doom of whatever the problem appears to be.

I threw any tobacco I had in the trash without the least thought. There was no withdrawal to suffer through, and there hasn’t been another urge to use any other addictive substance since that time. The healing was complete and the freedom has been permanent. That was nearly two decades ago.

I am so grateful for the healing, but more than that, I am especially grateful for the deeper grasp of my direct, un-beginning, unending, inviolable relationship with God, good, which came through consecrated prayer. The teachings of Christian Science light up the Bible’s message and help to reveal the practicality of that wonderful, timeless collection of God’s announcements to mankind—that the spiritual is supreme and matter is powerless. 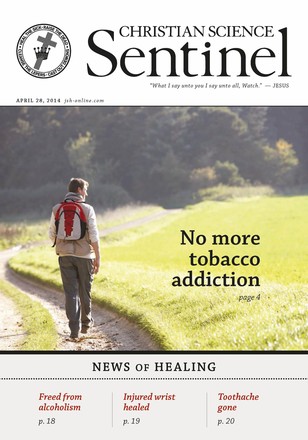 The city foursquare, and healing

The promise of everlasting love

A call for 'gospel humility'

Nothing too 'small' for God

I see the light!