About a year and a half ago, after a great deal of prayer and persistence, I at last gained my freedom from a challenge that had plagued me since college.

Whatever the possible material explanations—genetics, upbringing, buying into the prevailing attitude in society that a packed refrigerator is a sign of prosperity—I had become a "foodaholic." I was unable to control my appetite and frequently indulged in binge eating. On the surface, this behavior didn't seem to have reached a crisis point, because I didn't look excessively overweight. But a deepseated feeling that I was making a god out of food kept me in a state of mental turmoil and self-dissatisfaction.

At first I called a Christian Science practitioner for help in healing this situation. However, at the time, I wasn't as grounded in the teachings of Christian Science as I've become since, and I soon after sought the help of a psychologist. Over a period of about two years, she helped me deal with a number of issues related to excessive eating. Although these sessions provided me with more solid footing identity-wise, I nevertheless emerged still struggling with my obsession with food.

For the next several years, I attended a 12-step program that addressed overeating, and eventually felt I'd gained a healthy handle on my eating problem. I was able to reconcile the religious theme of the program with what I was learning through my continued study of Christian Science. But ultimately the discrepancy that caused me to withdraw from the program was the idea I would always be an overeater, just one in recovery. I wanted to be totally healed of the problem—and I knew Christian Science would support that view.

From that point on, I regularly spent time in prayer seeking a spiritual solution to curbing my appetite. A subtle fear, however, that complete freedom was an unattainable goal hindered my progress. At one point I considered another foray into the realm of material solutions when a friend in the medical field told me about a drug billed as a revolutionary appetite suppressant. I contemplated trying it out, but in the end I saw that my rationale for using it was flawed—I knew the bottom line was that the problem was fundamentally mental, and couldn't be reached with a drug—so I gave up on the idea.

Then one Sunday after attending church, the holding pattern that had gripped my thought for so long suddenly broke, and I had a new feeling that my prayers were being answered. Many ideas that I'd been praying with came together for me in the form of these insights:

1. I had a spiritual purpose that God would unfold to me on a daily basis in terms of the work and activity He wanted me to accomplish. This was my primary mission—to see what I was supposed to be doing in the divine plan. Indulging in a cycle of bingeing and obsessing about food was no part of that mission.

2. As Christian Science teaches, God, divine Mind, alone is the source of the thoughts that determine our experience. I could claim this as a spiritual law governing my life. I wasn't at the mercy of mortal mind—the false consciousness that is opposed to the divine.

3. I could obey Jesus' injunction to "take no thought for ... what ye shall eat" (Luke 12:22). Further, the passage in Science and Health, that it would be "foolish to stop eating until we gain perfection and a clear comprehension of the living Spirit [God]" (p. 388), affirmed for me that I wasn't stuck in an all-or-nothing situation where eating was concerned, but that I had divine backing for saying no to overeating, and spiritual dominion that would result in moderation, rather than going to extremes.

4. Finally, I saw that a complete healing was possible. I knew that neither human willpower nor remedies based on a material concept of man would solve the struggle. But understanding more about God and my spiritual nature as the outcome of the one perfect Creator would dispel the errors I'd been clinging to and bring healing.

Now, I felt firmly planted on a spiritual path. I saw how susceptible I'd been to an illusion that appetite controlled me. Continued prayer also uncovered the tendency I'd had to avoid self-correction or dealing with certain situations, and just eating instead. As I corrected my thinking with spiritual truth, rather than trying to fix a supposed physical disorder, I found myself being less judgmental, and expressing more calmness, compassion, and patience. The binge eating and obsession with food dissolved, replaced by normal eating habits. I lost over 20 excess pounds in the process, and my weight has since remained stable.

Through God's grace, this healing was possible, and it has remained permanent.

Send a comment to the editors
NEXT IN THIS ISSUE
FROM THE EDITORS
AND NOW, EXPLORE THE REAL CONSCIOUSNESS FRONTIER 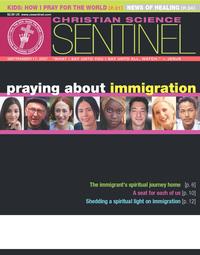