Recently, my husband and I went on a cruise with some friends. We were going to start out by sailing from Florida to South America. As we all gathered in a large room to board the ship, the time came and went when we were supposed to board. We sat there about four hours past the normal boarding time with no explanation. As we finally boarded, we were handed pieces of paper explaining that on the previous cruise there had been an outbreak of a contagious gastrointestinal illness that had necessitated sterilizing the entire ship before our cruise. We were told that if anyone did not wish to take the cruise because of this, they would receive a full refund.

That evening on the ship, we received a newsletter stating that if anyone began to feel ill with certain symptoms and they lasted more than two days or were extreme, they should report to the ship’s doctor for an examination. The ocean that first night was quite rough, and I started to feel seasick. I didn’t sleep that night, and by the next morning, I was feeling quite ill. Then symptoms began to appear that had nothing to do with the roughness of the ocean. In fact, I was exhibiting all the symptoms listed in the ship’s newsletter. I wanted to be obedient to the cruise company’s request, but I did not want to visit the doctor on board. Instead, I wanted to work this out through prayer in Christian Science. Since I also wanted to be respectful and considerate of the other passengers, I stayed in my cabin and did not go out for any meals. I also put the “Do not disturb” sign on our cabin door so that the cabin steward did not have to come in to do regular cleaning.

I began my prayer with the fact that God’s man is wholly spiritual, not material, and is not subject to any matter-based health laws. I was under only God’s law, as was each passenger on the ship, and could not be fooled into believing any false testimony from the body. In my prayers, I challenged the concept that there was any power to the belief of contagion, knowing that all I could have was from God, and that had to be good. Anything that is not harmonious is a lie about man. Mary Baker Eddy says in Science and Health with Key to the Scriptures, “Truth handles the most malignant contagion with perfect assurance” (p. 176).

During the day, a friend of ours who was in the cabin next door brought over her Anthology of Classic Articles, a compilation of articles from the The Christian Science Journal and Sentinel. She pointed out one article in particular that she had found very helpful. I, too, found many helpful and healing truths in the article, which helped to eliminate any fear that disease could grow in my thought and be manifested on my body. The article concluded by saying that matter is never the substance of man. Man is entirely spiritual and is governed only by the laws of God.

I was grateful for my husband’s prayer and support as well as the support of the friends with whom we were traveling.

By the next morning, I felt perfectly well and ready for the day’s activities. I know that the prayerful work that was done touched everyone on that ship. When a health inspector came on board at one of the ports, it was reported that things were looking good, and the many restrictions that were in place to prevent the spread of disease could be lifted soon.

I’m grateful to be able to put into practice all the spiritual truths that I am learning in Christian Science. How comforting to know that even when we are many miles from home, from our church, and from familiar surroundings, God is in that very place, guiding, guarding, protecting, and loving us every minute. 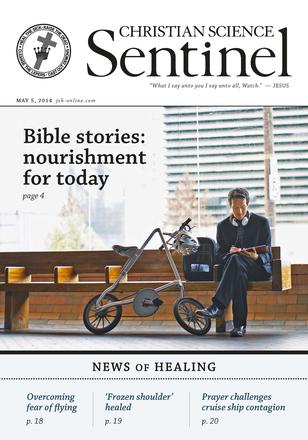