For more than a decade, I was a cigarette smoker and tried several times to quit without lasting success.

My complete healing came on a Sunday night at the end of the winter holiday break, before I returned to my job as a school vice principal. Though I’d been praying off and on for months, desiring to be rid of the addiction to tobacco, I had just recently renewed my efforts by praying to better understand and know my true spiritual selfhood as the man of God’s creating. I strove to see that smoking tobacco didn’t define or own me.

That night, I was reading a Sentinel and smoking in bed. As I came to the end of an article, and to a cigarette as well, I took one final puff and knew with all my heart that this would be the last time I’d ever smoke. And this proved to be true.

I realized how the concept of “enslavement” related to this habit, and I also became aware of this reference to “slavery” in Mary Baker Eddy’s Science and Health with Key to the Scriptures: “… ‘Slavery is abolished.’ The power of God brings deliverance to the captive” (p. 224). As I put out that final cigarette, I felt a great sense of peace and went right to sleep. When I woke in the morning, that same peace stayed with me. I knew I was free.

Two weeks later, none of my co-workers had mentioned the fact that I was no longer smoking. So I told a few of them about my freedom from the addiction. They were happy for me, and surprised that they hadn’t noticed. I told them I’d been healed of the habit through prayer. They were members of different churches than mine, but also acknowledged God’s power to heal. Although we continued to work closely together for three more years, we never again talked about smoking.

I never suffered from any symptoms of withdrawal or felt urges of any kind to smoke again. This was in 1982, and I rejoice in the fact that this healing has been permanent.

I later recognized that human will played no part in the healing. Human will proved useless more than once. As Mrs. Eddy states in Science and Health, “Christian Science reveals a necessity for overcoming the world, the flesh, and evil, and thus destroying all error.

“Seeking is not sufficient. It is striving that enables us to enter. Spiritual attainments open the door to a higher understanding of the divine Life” (p. 10). I had to strive for a higher understanding of my true identity as God’s spiritual man through the daily effort of turning to God, divine Mind, in prayer and humility. I am most grateful for this proof of my true spiritual selfhood. 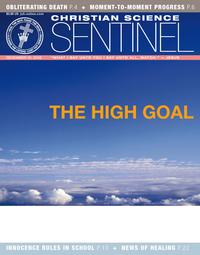