EVER SINCE taking up soccer in second grade, I've loved sports of all kinds. And I love to encourage the athlete in everyone. But whether I'm training to run a marathon, flying down a hockey field, or bobbing in the ocean, learning to surf, I've learned the importance of taking time to pray each day.

To me, praying every day to feel close to God can be like following a training schedule—say, for a marathon. A misconception about athletics in general, and marathon running in particular, is the idea that an individual has to possess a certain level of skill to compete. But I haven't found that to be the case. To me, athletic training is all about taking little steps over time—and if you follow a training program, you'll be successful.

For instance, a friend tried for years to find her niche in sports. Then, during her sophomore year in college, she joined the cross-country running team. Her first year was OK, but her next two seasons were fantastic. What made the difference? She committed herself to doing every single workout on the training schedule—even over the long summer break. When she returned to school, she consistently finished races at the front of the pack. She worked, and reaped big rewards.

I find it's the same with living a prayerful life. My efforts every day to listen for God's directions, and be in tune with them, keep me alert to my spirituality and to where my real strength comes from in whatever I'm doing. The time I spend running actually provides great opportunity for me to pray. Sometimes during a run, I may feel tired, or that some part of my body hurts, or simply that I want to stop. But when I tune in to God and focus on the good He gives, I can let go of those negative thoughts.

MY REAL GOAL (WHICH IS BETWEEN ME AND GOD ALONE) IS SPIRITUAL GROWTH AND PROGRESS, AND IT BECOMES CLEARER WHEN I PERSIST WITH JOY.

When my children were very young, I went for several years without being physically active in sports. My first race after this long break included some extremely steep hills. On one of those hills, early on in the race, I noticed myself passing a very muscular, fit young man. I felt temporarily energized as I continued up the hill. However, a little bit later, on the same hill, I was passed by a woman who was probably about 30 years my senior. Suddenly I felt deflated and zapped of energy.

As I struggled up that hill, I considered how my thoughts had affected my performance. I decided that I needed to focus on the top of the hill, not on the other runners, since they were not reliable markers of my progress. As I did this, I could see that every single step took me closer to my goal—and that it didn't matter how fast or slow the other runners went. I felt a great calm when I stopped worrying about how I was measuring up, and I had a great race.

It's the same in day-to-day activities. Whether I'm refereeing youth soccer games or being with my family, my real goal (which is between me and God alone) is spiritual growth and progress, and it becomes clearer when I persist with joy. Keeping my thoughts on God, and striving to be more in accord with Him, I don't get caught up in comparing myself with others or wondering how much I've progressed.

Along with the mental and physical joy of competing in sports, there's often a lot of focus on diet, nutrition, and body composition. But I've tried not to let this material view limit my experience. The Biblical Daniel proved that nutrition had little to do with health or strength when he refused to eat the king's food, which was intended to make him physically stronger. At the end of his "fattening up" period, Daniel appeared to be healthier than the young men who had followed the king's diet (see Daniel, chapter 1).

I've found the following ideas to be especially helpful as well: "God rests in action. Imparting has not impoverished, can never impoverish, the divine Mind. No exhaustion follows the action of this Mind, according to the apprehension of divine Science" (Science and Health, p. 519). While pondering that statement, I've felt moments of true restfulness, even in the middle of a marathon.

My consistent focus on God keeps me rested and joyous in sport activities and in day-to-day endeavors. It's the best training schedule I know! CSS

Heidi Heinbaugh lives in Las Flores, California, with her husband and three children.

Send a comment to the editors
NEXT IN THIS ISSUE
IN THE CHRISTIAN SCIENCE BIBLE LESSON
BABEL-BUILDER OR SPIRIT-MOVED HEALER? 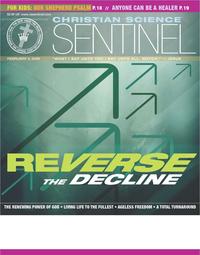