A soldier telephoned a Christian Scientist who is serving as a Chaplain in the Army. With evident concern in his voice he said: "I am in the hospital. The doctors have thoroughly examined me and stated that I am suffering from acute appendicitis. They plan to operate upon me in forty-five minutes. What shall I do?"

From the military standpoint there was nothing the soldier could do except submit to the operation, if he was so ordered. Recognizing this fact, the Chaplain began to reassure the soldier with the truths of Christian Science. He affirmed: "There is one Mind that governs all, and there is one law, the law of God. This law supersedes all else; it supersedes human opinion and medical verdicts, because God is all-powerful and ever present." After reminding the soldier that in reality he was God's perfect child, watched over and cared for by divine Love, the Chaplain terminated the telephone conversation and immediately began to give the man Christian Science treatment.

About nine o'clock in the evening when the Chaplain went to the military hospital to visit the soldier, he found him grateful, happy, and free from suffering. The serviceman explained that after he had talked with the Chaplain, his temperature dropped to normal and he began to feel more comfortable. When the doctor called on him a little later and noticed his improvement, he decided to postpone the operation.

While the Chaplain was talking with the soldier, the doctor came in to examine him again. Learning that the serviceman was feeling well and hungry, he said: "There is no need for you to have an operation. I see nothing wrong with you." After remaining one more day in the hospital, the soldier was returned to duty, completely healed through Christian Science of the condition that had originally been diagnosed as appendicitis.

A Christian Science Minister for the Armed Services received a telephone call from a woman who seemed full of fear. She explained that her husband, an Air Force officer, was in the hospital at his air base. The doctors had diagnosed his condition as viral hepatitis. Claiming that there was nothing more they could do for him, the doctors had stopped giving him medicine and had placed him on the danger list. At this point the officer's wife asked a doctor if he thought her husband should try Christian Science. He acknowledged that it might prove helpful. Accordingly, she went to her husband, who knew very little about Christian Science, and recommended that he try it. After receiving his consent, she called the Christian Science Minister.

That very day the Minister visited the officer in the Air Force hospital and found him in an extremely weakened condition due, in part, to the fact that he was not receiving solid food but was being fed intravenously. The Minister worked to uplift the officer's faith by quoting inspiring and comforting Bible passages. At the end of the interview the officer seemed more cheerful, hopeful, and strong.

During his second visit the Minister read over with the officer "A mental court case" (see Science and Health with Key to the Scriptures by Mary Baker Eddy, pages 430-442), which deals with a patient suffering from liver complaint. The officer genuinely enjoyed this allegory and derived much good from it. Not long afterward the doctors placed the patient on solid food and then transferred him to an Army hospital.

The Minister continued to visit the patient and recommended that he start reading Science and Health from the beginning. When he was about one third of the way through the textbook, all the yellow color left the officer's skin and eyes. Soon he was discharged from the hospital completely healed through Christian Science.

A sailor who has been serving at the United States Naval Station, Newport, Rhode Island, reported as follows: A year and a half ago when the aircraft carrier "U.S.S. Bennington" suffered a series of explosions, a large number of the personnel on this ship, who were seriously burned and injured, were brought to the Naval hospital in Newport. One was a Christian Scientist.

When the Christian Science Representative in the Armed Services, who is a WAVE officer, learned about this man, she visited him frequently while he was in the hospital. She read to him and voiced the truths of Christian Science. In the meantime he was receiving help from a Christian Science practitioner.

Although to physical sense this officer was seriously burned about his face, head, and hands, and the doctors estimated he would be hospitalized for sixty days, he was discharged from the hospital in two weeks, and after a short leave returned to duty. Christian Science healed him quickly and effectively. 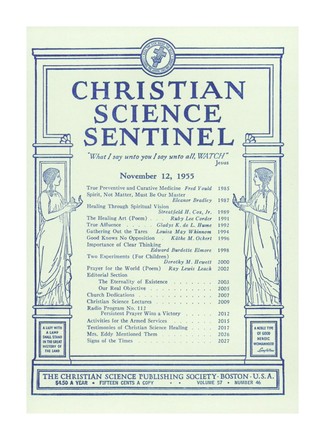 SPIRIT, NOT MATTER, MUST BE OUR MASTER

GATHERING OUT THE TARES

PRAYER FOR THE WORLD

THE ETERNALITY OF EXISTENCE

As the years go by, my gratitude...

Having received much help from...