The truth about self-justification

Don’t we need to defend or explain ourselves from time to time?

When I was in college, it felt as though some of my relationships could be improved. Also, conversations with close family members often didn’t feel as happy or productive as they could be. Thinking it would help, I tried to defend myself by explaining to them how I felt about some personal struggles I faced. In retrospect, I can see that this came across as blaming others. I wasn’t owning up to issues that I could have been praying about but was actually perpetuating the disturbance I felt and negatively affecting those around me. But at the time, I was unaware of this and wondered why I kept hitting a wall in my communications with family and friends.

One day while I was reading Science and Health with Key to the Scriptures by Mary Baker Eddy, the term self-justification hit me like a ton of bricks. The passage implied that this was a sin—an action or thought that would appear to pull us away from God.

I was shocked. Why is self-justification wrong? Don’t we need to defend or explain ourselves from time to time?

As I prayed for an answer, I came across a reminiscence by one of Mrs. Eddy’s early students, who had similar feelings before recognizing that justifying ourselves is actually a form of revenge, an action that Christian Science describes as “inadmissible” (see Science and Health, p. 22). Janette Weller wrote, “It seemed to me that I could not endure to be misjudged and misunderstood. This intense longing for self-justification kept up for many months [until], suddenly, at a Sunday service, the thought came to me that my justification would mean another’s condemnation, and a new light dawned in my consciousness. I was then and there convinced that a desire for self-justification was the highest sense of revenge one could entertain” (We Knew Mary Baker Eddy, Expanded Edition, Vol. II, p. 54).

Certain words or actions that recalled painful memories would trigger extreme anxiety in me—what today might be called a panic attack.

Self-justification is mentioned six times in Mrs. Eddy’s published writings. In one instance, she says, “In patient obedience to a patient God, let us labor to dissolve with the universal solvent of Love the adamant of error,—self-will, self-justification, and self-love,—which wars against spirituality and is the law of sin and death” (Science and Health, p. 242).

I came to realize that trying to defend a wrong or selfish action—even in something as minor as being late for a meeting—is actually attempting to justify error instead of seeing ourselves as God’s reflection or image, as the Bible says we are. It accepts that something unlike God can exist and have an identity. It serves self, not God—the only true Ego—and denies our true identity as God’s perfect reflection.

As we instead see ourselves in prayer as the flawless creation of divine Love, we realize that there is no need to attempt to justify error or make it a reality. The fear of being an erring human being separated from God—or losing face—falls away, and we are more loving because of it.

Beginning when I was young, certain words or actions that recalled painful memories would trigger extreme anxiety in me—what today might be called a panic attack. Without realizing it, I sometimes took my suffering out on people close to me and didn’t treat them as kindly as I normally would have. I felt angry with the other person because my perception in those moments was that it was their fault I was going through so much pain. But through this new understanding of the false basis of self-justification, I came to see that this pain was no one’s fault, and that I should pray to gain a better understanding of what I truly am as God’s expression.

I realized in my prayer that I had been rationalizing my actions by explaining to a select few that there was a real reason why all of this was happening—that a particular past experience was the reason I didn’t feel like myself. Excusing this error had allowed it to continue, and the self-
justification made others feel wrong, blamed, or helpless to remedy the situation. It also prolonged the lie. If we accept that error (that which is not caused or created by God) has a cause, we also accept that it is a reality. This delays our recognition that the error is no part of our spiritual identity.

I came to see that the real issue was a need to better understand my relation to God.

It took humility to wake up and see that the way I felt wasn’t real, because it had no place in divine Truth. As I continued to pray about this, I came to see that the real issue was a need to better understand my relation to God. It had nothing to do with what anyone else did or said. Nor could I be affected by anyone else if I understood and accepted that God governed me. I saw that there’s no excuse for not speaking with complete, outpouring love. I prayed to know how God, Love, saw me, and I gained a greater sense of His love for me and all. It became apparent that Love doesn’t know anything unlike goodness.

This shift in my thinking not only improved my relationships greatly but also led to a full and complete healing of the anxiety I had suffered. It has been several years since this healing. Who knew that removing self-justification from my thought would have such a huge impact?

When I was growing up, if a coach or dance teacher said, “Don’t make excuses,” I always agreed. But now I understand why that’s so important. As God’s loved, spiritual child, created in God’s likeness, each of us is actually free from fault or selfish behaviors. With this knowledge, we can naturally speak with honesty, meekness, grace, and selflessness.

We all have the ability to realize that Love is the law governing all speech and action. Divine Love dissolves any pattern or habit of error and shows us our true nature. It’s natural for us as God’s reflection to communicate with others as lovingly as God communicates with us. Letting go of self-justification—a false representation of our identity—opens the way for healing and promotes loving communication and long-lasting, healthy relationships. 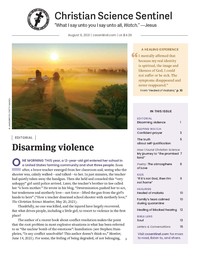