In Science and Health (p. 547) Mrs. Eddy writes: "The Scriptures are very sacred. Our aim must be to have them understood spiritually, for only by this understanding can truth be gained." A student of Christian Science once asked her teacher how she could be sure her understanding or interpretation of the Scriptures was correct. His reply was, "Prove it by demonstration."

This student sat one day in deep thought. One whom she loved lay in the next room with aching head and burning brow. She earnestly sought divine guidance and help, but conflicting and confusing thoughts persisted in presenting themselves to her. Why had she not been able to protect her household against this intruding evil? Was it her fault that she had not made her own the promise that "there shall no evil befall thee, neither shall any plague come nigh thy dwelling"? Perhaps the fault was not with herself after all; it might be that the sufferer had neglected to do his mental work aright. While attempting to pray, she was admitting to her thought a continual round of questions, not one of which seemed to bring her near the solution of her problem. She opened the Bible to the ninth chapter of John, and read again the account of the healing by Jesus of the man born blind. His disciples asked him, "Who did sin, this man, or his parents, that he was born blind?" Jesus answered: "Neither hath this man sinned, nor his parents: but that the works of God should be made manifest in him. I must work the works of him that sent me, while it is day: the night cometh, when no man can work."

According to the doctrines in which she had been reared, suffering was not necessarily the result of specific sin on the part of anyone, but was sent by God for some good purpose; this, however, was at variance with all the teachings of Christian Science. On page 127 of Science and Health Mrs. Eddy writes, "Christian Science reveals God, not as the author of sin, sickness, and death, but as divine Principle,Supreme Being, Mind, exempt from all evil." And yet the recorded words of Jesus were that the man was blind, "that the works of God should be made manifest in him." Human reason led from one difficulty to another until the confusion seemed complete. On page 161 of Miscellany Mrs. Eddy warns us against allowing human reason to "becloud spiritual understanding," and she adds, "Trust in God, and 'He shall direct thy paths.' " Closing her books, this baffled student turned unreservedly to God and humbly asked for help. With material sense silenced and with thought ready to receive God's message, it is not surprising that there came a clear revelation of Truth and a demonstration of Truth's power to heal.

Students of Bible history know that in the earlier manuscripts all of the letters are capitals and are written mostly without breaks or stops. The margins of the page and the uniformity of the lines are not broken, even for the sake of preventing the division of a word. This was the method of writing used during the period in which Jesus lived. It was changed very gradually through the centuries that followed. In the course of time spaces began to appear between words, and then the text was divided into sentences, with more or less inaccuracy of punctuation and capitalization. It is entirely possible that the changing of one capital letter or one punctuation mark, while in no way altering the literal wording of Scripture, may change the entire meaning of a passage. 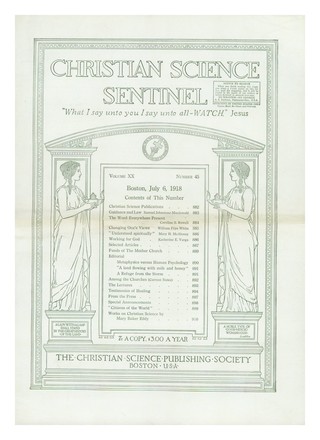 Christian Science is doing the greatest service to mankind...

Because the statement is not qualified or explained, it is...

In a recent issue under "Gossip and Grumbles," the following...

Since the Christian Science textbook, "Science and Health with Key to the Scriptures,"...

Christian Science does not teach that the man of flesh can...

Our great Master did not escape the bitter misrepresentation...

In a sermon recently reported in the News, the pastor...

Funds of The Mother Church

"A land flowing with milk and honey"

A Refuge from the Storm