For traveling over rough terrain, there's an option available in some cars and trucks called 4WD—four-wheel drive. When you encounter mud, snow, or ice, you can shift into that mode and have more traction.

Most of us have probably felt at one time or another that we could use some 4WD in our lives. We're working quite hard, but we just don't seem to be getting anywhere. We may even be praying the best we know how, but it still feels as though we're spinning our wheels.

If we feel that way, it may indicate the need for a basic shift of viewpoint. This change of view is vastly different, though, from just pressing a button. It takes a willingness to put our whole heart into the effort. But this willingness can bring substantial changes in the way we view prayer and in the effectiveness of our praying.

There was a period in my dad's life when it seemed obvious that something remarkable had happened to his outlook. Before, his earnest efforts seemed to be going nowhere in particular. Then they suddenly took hold, and he became successful not only in providing well for his family but in expressing a great deal of kindness and healing to others.

Until midlife he had been dogged by financial problems and self-doubt. My memory of those years is that he was often gray, troubled, and unhappy.

It was obvious that something was powerfully changing his outlook. I could see him working very hard to follow Christ Jesus' teachings practically, letting the standpoint he was learning about in scientific Christianity replace the thoughts about himself that had been so habitual. He clearly thought of himself less and less as an underdog and a victim of circumstance and more and more as the well-loved son of a divine Father.

In a short time he left the bank where he had held a minor position, went into business for himself, and was then asked to return to the bank as an officer. During this time he also served as First Reader of a branch Church of Christ, Scientist, and became a director of several business organizations.

Yet the most significant thing was obviously his new sense of the thoroughly practical power of prayer to make him aware of the infinite goodness that belongs to man, who is not a fatally limited material being but is actually God's spiritual image and likeness. This brought a largeness of spirit and an ability to bring healing into other people's lives. My basic memory of my dad is that he was a joyous man.

Perhaps we've considered prayer as something of an external process, something that we engage in and then we wait to see the good results that might conceivably come. We know better than to ask God to fix something that we think He hasn't done correctly in the first place, but nevertheless we may be missing a crucial point. Something does have to be changed, and that something is what we have been wrongly or mistakenly thinking, which obscures God's wholly good government of His creation.

Prayer, by its very nature, involves change. It means that we stop one kind of thinking and start a different kind. What else could real prayer be? It can't simply be tacked on to our usual approach to life and what we routinely think. As prayer is understood in Christian Science, it requires paying greater attention to God and bringing one's life and thought and desire into line with God, with the new recognition that our life is to be found entirely in God, Spirit. It means thinking and acting on the thoughts that God gives and learning to resist other thoughts.

Christ Jesus points toward this in the Sermon on the Mount. He says, "Take no thought for your life, what ye shall eat, or what ye shall drink; nor yet for your body, what ye shall put on." His words stand as a warning against the usual ruminating about all the difficulties we feel we're facing. This is without power and actually accomplishes nothing, Jesus tells us. But he also speaks of God's ample care, and he says, "Ask, and it shall be given you; seek, and ye shall find; knock, and it shall be opened unto you."

Asking of God, we find that what might have seemed a closed door is opening. We are given a new and greatly broadened view of God, Spirit, and of man as His spiritual expression. This is the Science, or truth of being, which shows God as All-in-all, the divine Principle. Mary Baker Eddy describes this major shift of view in Science and Health with Key to the Scriptures: "When understanding changes the standpoints of life and intelligence from a material to a spiritual basis, we shall gain the reality of Life, the control of Soul over sense, and we shall perceive Christianity, or Truth, in its divine Principle."

To be involved in the Science of Christ is to be changed—to let go of the old thought-taking and ways of thinking. This enables us to take firm hold of the spiritual basis, and we are able to get moving once again. 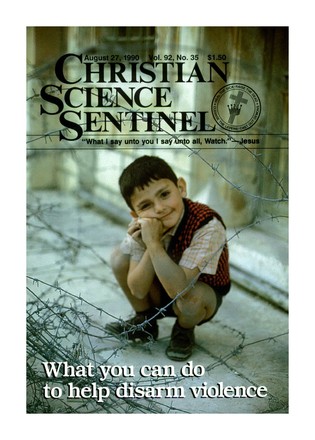 "One of the officers drew his gun. Then he thought, 'There's a better way.'"

A HEART FOR COMMUNITY

Questions and answers about Christian Science

Finding a way out of grief

FROM HAND TO HAND

Finding meaning in the face of senseless tragedy

"Citizens of the world, be free!"

Science and Health with Key to the Scriptures by Mary Baker Eddy...

From the time I was a teenager, I was faced with periodic...

By Peter C. Vaughan with contributions from Christine Vaughan | August 1990

My name is Garrett and I am in the fifth grade

I am so grateful to have been raised in Christian Science