I am extremely grateful for the way in which Christian Science...

I am extremely grateful for the way in which Christian Science thoroughly heals. A recent healing that I had was graphic proof to me of God's complete care.

My husband and I took a short weekend trip by dog team to visit some friends. Their cabin is about four hours by dog sled from our cabin. We had a beautiful trip and spent the night there with a number of other people who had come as well. We were the first to leave the next day, as we had a commitment that same afternoon.

Our friends always express concern when teams leave their yard because the narrow trail is downhill through thick woods, and dogs are always very excited when they first leave a yard. Our team was especially enthusiastic this time because they had spent the night with over sixty other dogs.

I was riding in the sled while my husband drove, when shortly after leaving the yard the sled ricocheted off a stump and crushed my face between the sled and a tree. I fell out of the sled, and the dogs came to a stop when the sled caught firmly on the next tree.

My first response was to stay very still and listen to God's comforting truth. Any fear that I had was quickly dispelled. I felt completely confident within seconds after we stopped that healing was in effect. My husband is also a Christian Scientist, and I was grateful for his loving assurances of God's care and ever-presence. Having confidence in God's omnipresence, we decided not to go back to our friends' cabin; but instead, we continued on our way, praying silently

Although I initially experienced some pain, within ten minutes I felt no discomfort at all, though I could not open one eye. We had four hours left of travel, but I never felt as if I wanted to be home more quickly; rather, I enjoyed the lovely day and used my time to affirm God's control in all situations. As Science and Health by Mrs. Eddy states (p. 171): "Mind's control over the universe, including man, is no longer an open question, but is demonstrable Science." I felt the confidence and the presence of God expressed in Mrs. Eddy's statement in Science and Health (p. 177): "The evidence of divine Mind's healing power and absolute control is to me as certain as the evidence of my own existence."

When we arrived home we had to leave right away to attend a concert followed by a rehearsal for an ensemble that both my husband and I were in. Our ensemble was performing four days from then. But as my face looked rather alarming, I worried about what people would say and the questions they might ask.

Indeed, as I had expected, concern was voiced that I have my eye cared for and use certain ointments on the abrasions. This sort of advice was continued when it was necessary for me to go to work the next day. I work in a restaurant, and although the wound was covered, many people stated their concern. Their worries did not shake my confidence in God's healing power, but my inability to calm their fears bothered me intensely. I could only say that the situation was being cared for.

It did not seem incongruous to me, at the time, that I could be so certain of God's care and yet be so uncertain that others would also be able to see His care of me manifested. But as I went through the day I continued my prayers, and I realized suddenly that God governs all. He does not just help me to see the nothingness of accidents or the material manifestations thereof, but He helps all mankind to see this nothingness. And His allness prevents any fearful beliefs from having power.

From that moment on, I was able to see people's concerned comments as their expressions of love and of the sense that it is man's right to be healthy, happy, beautiful. And what abundant love was expressed! This, for me, was a revelation that I needed.

The next day I could open my eye most of the way; and by the day of our concert, the scabs that had covered one side of my face had completely fallen off, my eye was totally open, and I could see clearly. In less than a week, what had been an alarmingly black eye was a completely normal color. The crowning glory of the healing was that it was witnessed by so many people—who expressed amazement (some several times) at the speed with which my face had healed.

I am unceasingly grateful for this healing and for so many other graphic proofs of God's care.

Send a comment to the editors
NEXT IN THIS ISSUE
Testimony of Healing
During the Second World War, I was a United States Navy pilot... 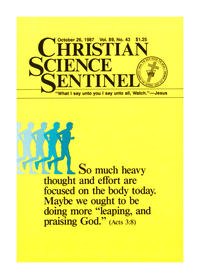