We are two sisters and a brother, and we go to the Christian Science Sunday School. Every week, we read the Bible and learn about different stories and characters. The stories in the Bible happened a long time ago, but they still have healing lessons for us today. Here’s how they helped us!

My favorite Bible character is Elisha. I like when he helped the soldier who had a disease all over his body. When Elisha told him to wash in the Jordan River, the soldier didn’t want to do what Elisha said. But when he was obedient, he was healed (see II Kings 5:1–15). That story reminds me of how listening to God and being obedient helps me when I need healing.

My favorite Bible character is Noah. He had to find all the kinds of animals and put them on his boat to save them from the flood (see Genesis 6–8).

One time I lost the keys to my jewelry box. I was very upset. I looked everywhere but couldn’t find them. I thought that finding all those animals must have been hard for Noah, but God helped him. Then I had a very clear thought to open my jewelry box. I found it was not locked, and my keys were inside! I listened to God like Noah did, and God helped me just like He helped Noah.

I like the story of Adam and Eve because it helped me at school.

Adam and Eve couldn’t live in the garden anymore because they ate the food that God told them not to eat. They ate it because the snake tricked them (see Genesis 3).

Sometimes one of my friends at school says “potty words,” which aren’t very nice. But I don’t get tricked. I don’t say those words because I know it’s not right, and I want to be good.

Sometimes it is hard to know what is good and what is bad. But when we listen to God, He tells us how to be good.

A Collection for Kids - January–June 2019 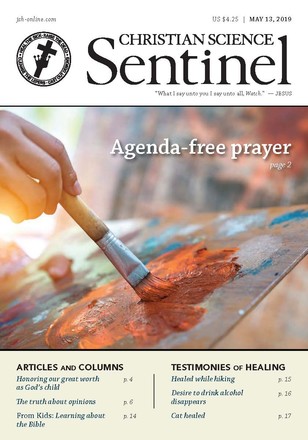 The truth about opinions

From unbelief to feeling embraced by God’s love