IN THE 1970S, when I was in my mid-20s, it hadn't even occurred to me that I could be free of my enslavement to prescription drugs. My addiction felt so real that I couldn't imagine life without it—that is, until I found God through Christian Science.

Still, I discovered that diet pills had, what seemed at the time, a positive side effect. For about two hours after taking a pill, I would feel self-confident and able to concentrate intensely on my schoolwork—even on subjects I feared and disliked such as math. After the euphoria would come a few hours of mild depression and restlessness, which I learned to tolerate until it was time to take the next pill. Eventually, however, even though I knew I was intelligent, I felt totally incapable of studying without the stimulation of amphetamines to motivate and focus my thinking.

As my addiction continued, I needed progressively higher dosages to receive the desired effect and was told that my body had become accustomed to the drugs. Periodically I'd stop using amphetamines long enough for my body to adjust, so that I could subsequently start taking them again.

When I became a college student, my anxiety increased. I struggled with demanding course work and difficult social relationships, and began to suffer with depression. My mother then shared her prescription tranquilizers with me, and soon I was hooked on them, also. I started seeing a psychiatrist so that I could have my own prescription. I felt that these pills were my only path to peace and calm. Without them, I believed, I would be unable to cope with my life, unable to function productively. Over the years, I increased this dosage as well.

After college, now working full time, I had trouble sleeping. Fearful that I couldn't perform my job without sufficient sleep, I took sleeping pills (barbiturates) and was soon addicted, to them. When the barbiturates no longer had a strong effect, the doctor prescribed a special tranquilizer for me to take 30 minutes before taking the sleeping pill. Eventually I would collapse into a drugged sleep.

For two years I'd been searching for God. Not because I'd hoped to be healed of my addictions—I assumed that I was stuck with them forever. My real purpose was a longing to help my clients at work. At the time I was doing job placement in a welfare-to-work program. The people I met every day were impoverished and had few work skills. They had serious family and health problems as well. I thought that if I could only understand God better, He would show me how to help them. So I bought dozens of paperback books on various religions. Raised in Judaism, I knew nothing about Christianity. Eastern religions were popular with my peers, but wanting to be open-minded, I bought my first Bible and began to read about Jesus Christ.

At this time, I was ill and often in pain. Seeing my suffering, a boyfriend suggested Christian Science. He was not a Christian Scientist, but had an aunt who'd had many healings in Christian Science. I knew nothing at all about the religion, but I phoned a practitioner and made an appointment to see him.

I will never forget that appointment—it was the first day of a new life for me. The practitioner told me that God is totally good; that there is nothing else besides Him; that because God is all and good, evil is not real. Further, that as God's likeness, I was spiritual and pure, and that what we see with our physical senses is not our real identity at all, but a counterfeit. In fact, he told me that the entire material existence, with its sickness, sin, and death, isn't real at all, but an illusion, a dream. He explained that I could wake up from this dream and discover my true self as God's perfect expression.

The practitioner also explained that what we perceive as illness in the body is really erroneous thought masquerading as a condition of the body. He told me that bodily discords can be healed simply by a change of thought since we can't have sickness or anything else that God doesn't give us.

When I told the practitioner about my drug addictions, he said emphatically that I was free at that very moment, and that I needed only to claim that freedom as God's expression. I was so excited! Everything he said to me made complete sense, and I knew that Christian Science was the truth I'd been searching for. But still, I was too fearful to give up my drugs.

As I continued studying and talking with the practitioner, I felt increasingly hopeful and expectant of good. I'd been so unhappy with myself for years—for many reasons. Now I began to realize that I wasn't trapped; in truth, I was a child of God—pure, satisfied, and complete.

One day, about four weeks after our first appointment, my supply of tranquilizers was very low, and I felt desperate. The psychiatrist had already refused to give me more than my allotted amount. So I decided to visit some new doctors to see if I could get additional prescriptions. I planned to pretend that I had no other doctor, and that I'd never taken tranquilizers before. I knew this plan wasn't truthful, though, and I felt guilty about it.

Oh that men would praise the Lord for his goodness, and for his wonderful works to the children of men! For he satisfieth the longing soul, and filleth the hungry soul with goodness.

However, within the hour and a half before I could leave home, something very unusual happened. In essence, I experienced a period of mental confusion, finally followed by a clear realization that the drugs I'd been taking had no power at all to affect me. I suddenly and clearly saw that the effect of the drugs was actually mental, not physical—nothing but an illusion. This realization was not theoretical but utterly clear and obvious to me. I knew right then that the drugs I had worshiped and leaned on for 13 years were worthless.

I'd been fooled into believing the drugs had intrinsic value and power. Now I knew that I would never take another pill again. I was instantly, totally free of the addictions that had enslaved me for half my life. I stopped everything—the amphetamines, barbiturates, and tranquilizers—all at once, and yet there never were any withdrawal symptoms. Looking back I can see that this was a direct result of my deep yearning to find God.

Now, 34 years later, I remain free of drug use. My continued practice of Christian Science has enabled me to be successful in my career of job placement, to help many people, and to accomplish things that I would never have thought possible, both in my professional and personal life. I've learned that it is not a drug but God who gives us the motivation and courage to do what we have to do. Divine Love stills our fears and gives us peace. No chemical could possibly substitute for, or compete with, the infinite goodness that God is pouring into our hearts and lives right now.

The truth, as taught in Christian Science, set me free from drug addiction. This truth is available to everyone. As Mary Baker Eddy urged in Science and Health: "Citizens of the world, accept the glorious liberty of the children of God,' and be free! This is your divine right" (p. 227).

Go to the search box on spirituality.com and type in "addiction." Here is a sampling of the titles you'll find:

"You can overcome video-game addiction"

I'm no longer an alcoholic"

"Love for others helped me quit smoking"

Marcia Rosen-kemp lives in Evanston, Illinois, where she works for a non-profit organization that assists the homeless.

This article is included in:
2010 - PAMPHLET 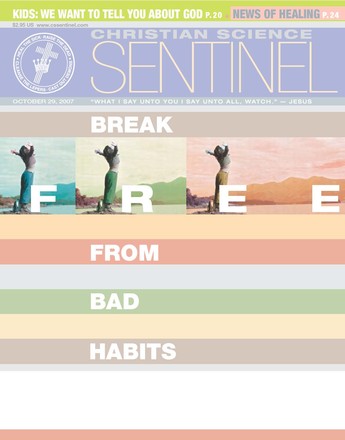 It's worth the effort

Always a way out

a reason to smile

Because nations do not thrive by laws alone

FINDING THE HOME THAT'S BEST FOR YOU

PRAYING FROM THE PLATFORM

We want to tell you about god

FROM THE MUDHOUSE TO THE SCHOOLHOUSE

WHO OWNS THE NORTH POLE?

GRATEFUL FOR MANY HEALINGS

PROOF OF MY FAITH

THE SEARCH FOR A KINDER HEREDITY