I was living away from home for the summer, doing an internship prior to my sophomore year in college. One bright, sunny Saturday my roommate and I decided it was perfect for rollerblading. We strapped on our skates and set out for the afternoon.

I was enjoying the day, until gravel suddenly lodged in the wheels of one of my skates. One foot stopped moving while the other kept going forward. I landed hard on the sidewalk, and during the impact my sunglasses broke, cutting my forehead deeply.

Immediately I turned my thoughts to prayer. I'd grown up in a home environment where praying for healing, using the principles of Christian Science, was natural and effective. So as I lay on the sidewalk, the first thought that came to me was something Mary Baker Eddy wrote in Science and Health: "Accidents are unknown to God ..." (p. 424). (The entire statement says, "Accidents are unknown to God, or immortal Mind, and we must leave the mortal basis of belief and unite with the one Mind, in order to change the notion of chance to the proper sense of God's unerring direction and thus bring out harmony.") I was very familiar with this statement, but up until the moment of my fall, I hadn't thought about its tremendous healing power. I reasoned that since God created all and since He is all good, I knew I couldn't possibly fall out of His realm of protection. I also held firmly to the idea that my appreciation for the beauty of the day couldn't be tarnished by an accident. I never felt any pain at this time, or at any other time during this experience.

A woman brought me a towel with warm soapy water to clean up the blood. She said she'd called the emergency services and that an ambulance was on its way. In the meantime, my roommate, who had been ahead of me, had turned around and found me on the sidewalk. She helped to clean me up and then skated home to get the car and clean clothes for me.

Before the paramedics arrived, I decided I wanted to rely on Christian Science for healing and go to the nearby Christian Science nursing facility. The paramedics were concerned about my condition when they arrived and wanted to take me to the hospital. They told me that I'd lost a lot of blood and listed several frightening conditions I might experience as a result. They also indicated that I would need X-rays and stitches, and that I would be in a great deal of pain.

As I listened to their concerns, I thought about "the scientific statement of being," which Mrs. Eddy wrote in Science and Health. This statement affirms the spiritual, unbreakable connection between God and His creation. I really held to the first and last lines of this statement, which reads in part: "There is no life, truth, intelligence, nor substance in matter. All is infinite Mind and its infinite manifestation, for God is All-in-all. ... Therefore man is not material; he is spiritual" (p. 468). This helped me to confidently affirm that as God's child, I was a resilient spiritual idea of Mind, rather than a vulnerable mortal. I realized I didn't have to accept any dire predictions. Instead, I could remember my present perfection based on my unbroken relationship with God.

I confidently told the paramedics that I planned to rely on Christian Science for treatment, and that I was happy to sign any release papers they needed. As they left, my roommate arrived in the car and took me to a nearby Christian Science nursing facility to have the cut on my forehead cleaned and bandaged. She had brought me a copy of Science and Health and encouraged me to read aloud the definition of man while we drove. It begins: "Man is not matter; he is not made up of brain, blood, bones, and other material elements. The Scriptures inform us that man is made in the image and likeness of God. Matter is not that likeness" (p. 475). What I liked about this statement is that it left no doubt about my present perfection. Because my true identity was spiritual, created by God, the only true Cause, I could not suffer any negative after-effects. As His expression, I could never be less than whole. God didn't see me as cut or bruised; He saw me as He always had—His pure, complete reflection.

However, as we were driving, I noticed that the edges of my vision were becoming fuzzy. I immediately recognized this, though, as a direct result of fear from the paramedics' predictions. So instead of agreeing with these symptoms, I saw them as merely trying to cloud my vision of the Truth. The moment I walked into the nursing facility, I felt such an outpouring of love from the staff that the fuzziness cleared—literally in an instant—and never returned. The Christian Science nurses cleaned and bandaged the wound above my eye, and I called a Christian Science practitioner to support my prayers for healing. I also spoke with my parents on the phone, and they began supporting me with their own prayers.

During this time of prayer, I was deepening my understanding of my spiritual nature. I thought a lot about several of Christ Jesus' healings—especially one of a woman with an "issue of blood" (see Luke 8:43-48). After she'd reached out to the hem of his robe, Jesus reassured her with the words, "Thy faith hath made thee whole; go in peace" (Luke 8:48). I loved the idea that it was her pure faith in God's healing power that made her whole—not a miraculous personal intervention by Jesus.

That idea of "going in peace" was an important element of my prayer. Although the wound was covered, it was in such a prominent place on my forehead that many people would ask what happened to me. I began to feel very self-conscious and avoided as many public places as possible. One day I realized that by altering my lifestyle just to avoid curiosity, I was actually accepting the whole reality of injury and accident. What I needed to realize was that my prayers could go on uninterrupted wherever I was, and that the healing was already established in Mind—never compromised by others' concerns.

I needed to realize that my prayers could go on uninterrupted wherever I was.

Once I realized this, I started going everywhere again without self-consciousness. I replaced feelings of unease and anxiety toward people with love and peace. I stopped worrying about the bandage on my head, and not long after, the wound completely closed and healed. Except for a small and barely visible mark, there is no evidence that I ever had an accident.

This was a particularly meaningful experience to me. I just knew without a doubt that treatment in Christian Science was my choice, and it didn't let me down.

Do you have something to say? E-mail us! Send to: jshwrite@csps.com. Subject: Sentinel teens

Anjuli Graunke lives and works in Burnsville, Minnesota. She enjoys biking, hiking, and reading in her free time. 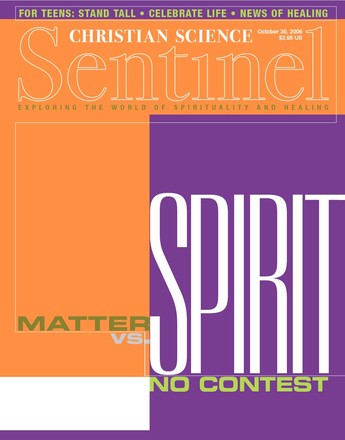 POWERFUL, PRACTICAL TRUTH 'THE SCIENTIFIC STATEMENT OF BEING'

A MATTER OF EVIDENCE

THERE IS NO MATTER