But for us to be ministers of reconciliation, we must understand the spiritual basis of the Master's reconciling work. In this regard, his teachings show clearly one infinite God, good. His compassion for the woman caught in adultery (see John 8:1–11), to cite just one example, clearly points to the truth of this passage from First John: "This then is the message which we have heard of him, and declare unto you, that God is light, and in him is no darkness at all" (1:5).

From the infinite goodness of God follow logically two fundamental spiritual truths. First, since God's creation must reflect God, it is also good, like its creator. Second, because God is infinite good, His creation, though distinct from Deity, is at one with Him. It does not exist apart from Him but is always in perfect union with Him as His own spiritual expression. These truths constitute the basis for the correction of injustice and for the reconciliation of each of us to God and to each other.

But if God is good and man as His likeness reflects God's goodness, how does one explain hatred and injustice? Evil, division, and conflict arise inevitably from the thought that good isn't infinite. Therefore the antidote to division is a fuller recognition of the allness of God and His expression, man, as reality.

To be reconciled to others or to help those in need of reconciliation, we put into practice this idea of man's oneness with infinite good, starting with our own experience. If you have been the victim of abuse, of racial, economic, or cultural oppression, or of any injustice, you can overcome that injustice with a greater understanding of your unity with God, good, and thus replace memories of oppression, victimization, and loss. You haven't been and are not now separated from good, and it's your divine right to know and prove this.

The antidote to division is a fuller recognition of the allness of God.

Recognizing that another cannot separate us from good allows us to forgive and to go forward. Paul, formerly a persecutor of Christians and later a target of violent persecution himself, wrote, "I am persuaded, that neither death, nor life, nor angels, nor principalities, nor powers, nor things present, nor things to come, nor height, nor depth, nor any other creature, shall be able to separate us from the love of God, which is in Christ Jesus our Lord" (Rom. 8:38, 39—emphasis added).

If we or a loved one has suffered an injustice, we may be sorely tempted to try to set things right through personal will. But the solution to conflict and injustice lies in neither human will nor revenge; it is found in a greater recognition of God as infinite good. This is so because divine goodness includes justice and mercy. Justice is vitally important to a country's and a people's progress. But the best way to contribute to that goal is to know that the same God who compassionately comforts victims also mercifully leads perpetrators to reform.

Even when there is or has been intense fighting, awareness of the omnipresence of good and of man's inseparability from God is a powerful healing agent. Knowing that God is supreme will help emergency workers act more efficiently, contribute to a more rapid restoration of order, and aid in preventing a recurrence of violence. Steadfast prayer will comfort and strengthen those who must find the courage to go forward and gain their freedom from images of violence.

A sentence from Science and Health indicates the power behind an acceptance of God's oneness: "One infinite God, good, unifies men and nations; constitutes the brotherhood of man; ends wars; fulfils the Scripture, 'Love thy neighbor as thyself;' annihilates pagan and Christian idolatry,—whatever is wrong in social, civil, criminal, political, and religious codes; equalizes the sexes; annuls the curse on man, and leaves nothing that can sin, suffer, be punished or destroyed" (p. 340).

By our worshiping one infinite God and recognizing ourselves and others as His image and likeness, at one with Him, there is no limit to the good that we all can accomplish as ministers of reconciliation. 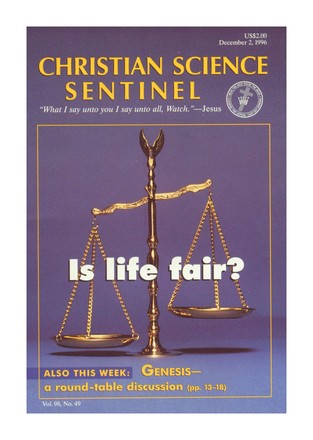 The Life that is fair

When you've been deeply wronged ...

Truth and reconciliation are commissioned by God

I have often enjoyed the Biblical accounts of the inspiration...

One time I was running up the stairs because my sister was...

The first sentence in the first chapter of Science and Health says...

I am so grateful for the healing I had through reading the Bible...