Have you prayed for your government?

Things are heating up this election year in the United States. As I write, the Democratic National Convention is in full swing, and the situations in Iraq and Sudan continue to escalate. In the midst of upheaval and change, I've noticed that the political climate and, in particular, the upcoming election of the president, has been particularly contentious.

Last fall, around the time of the California recall election, I was asked to speak at a prayer breakfast at a city church, which was organized to respond to people's concerns about their local and state governments. The gathering included the mayor, a city councilor, several ministers of local churches, and interested citizens. After my talk, we spent more than an hour discussing how all of us could bring unity and change to our communities in a constructive and spiritually motivated way.

We also talked about the often-toxic stream of criticism specifically aimed at public officials. The mayor said that while she loved her job, she often wondered how the people she worked with every day are able to cope with all the distrust and anger directed toward them. The conversation brought into sharp focus for me the many times my own thoughts have been negative and cynical—often knee-jerk reactions to political issues—without my taking the time to pray and to examine more deeply how I might be able to contribute to solutions.

After our gathering, a woman came up to me to say that she had had a complete change of heart. Although she had been adamantly opposed to the mayor, as she listened to her that day, she realized that a lot of the assumptions she'd made about the mayor were not really true. The woman seemed greatly relieved to learn that, while she might not agree with everything the mayor was doing, she felt sure that the mayor had the community's best interest at heart. Hearing this made the woman realize the importance of her own involvement, and that of citizens working together with public officals for the good of all.

I wonder what would happen if, rather than jumping into heated political conversations—pontificating about how things should be done—we prayed instead? What would happen if our thoughts about the presidency, our neighbors, or the situations in Iraq, Israel, Sudan, were rooted in a love that transcends all borders, all political affiliations?

Recently, I've been thinking a lot about what the Apostle Paul, in the Bible, wrote to his protege Timothy: "I exhort therefore, that, first of all, supplications, prayers, intercessions, and giving of thanks, be made for all men; for kings, and for all that are in authority; that we may lead a quiet and peaceable life in all godliness and honesty" (I Tim. 2:1, 2).

Think about it. What happens when we replace criticism with support and prayer for "all men [and women]," including world leaders? Prayer, at its best, always involves a willingness to set aside opinions and fears, in order to turn wholeheartedly to God for answers that will bless everyone. Prayer plunges beneath surface perceptions to recognize divine Love's governance of all being. I know that, for me, the rewards of this prayer are immediate: I feel more peaceful and filled with hope.

Joni Overton-Jung is a Christian Science teacher and practitioner in Toronto, Canada. 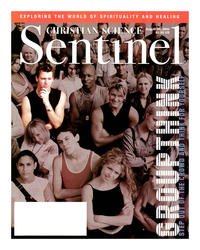