I could love him no matter what!

Jaquan was the cutest kid I’d ever seen! His smile and big brown eyes made my heart melt. Jaquan was one of the children at a children’s home, where I was visiting as part of a service trip to a foreign country. Jaquan and I had been paired before I left home, and I’d really been looking forward to meeting him.

Before I left for the trip, I bought children’s books, Play Doh, small board games, and other activities to use during our visit. I also talked with my mom and dad about caring for young kids, and they graciously shared some ideas with me. I was completely convinced that I had everything it took to be in charge of a four-year-old for a few days and was so eager to help make a difference in a life.

But when Jaquan and I began reading together the first day, it quickly became clear that he had no interest in listening to me read or even looking at the pictures. Instead, he was disruptive—running around, stealing other kids’ toys, rummaging through my bag, and making a mess of things. While the other kids sat quietly and behaved themselves, I spent the first session and a half sprinting after him and hearing my friends tell me, “Catch your kid, Kels!” since Jaquan was the only one who couldn’t seem to sit still.

I began to dread visiting the children’s home and did not want to go back.

Later, after we left for the day, I had time to talk to the other volunteers in my service group about what to do about Jaquan. They suggested I pray about the situation and do some research in Science and Health with Key to the Scriptures to see what Mary Baker Eddy has to say about children.

In the Glossary of Science and Health, I found this definition: “CHILDREN. The spiritual thoughts and representatives of Life, Truth, and Love” (p. 582).

I realized that it wasn’t my job to change this child but, instead, to correct my own view of him.

That night, I stayed up late praying to understand this spiritual concept and how I could think about Jaquan and love him unconditionally. I realized that it was not my job to try to change Jaquan but, instead, to correct my own view of him. I truly wanted to see him the way God made him—not a kid with behavior problems, but God’s good and innocent child. After I prayed with the definition of children for a while, it came to me so clearly that I could walk into the children’s home for my time with Jaquan and love him no matter what. Nothing could get in the way of my ability to do that, since God had created him as lovable and me as capable of loving.

The next visit was completely different! I was no longer waiting around for Jaquan to change but rather was seeing him in a new light, thanks to my prayers. And I could tell he was receptive to my love.

We had such a good time together, reading a fun call-and-answer book and playing hopscotch and ball. That day, we were both smiling from ear to ear.

I am so grateful for Christian Science and what it has taught me about how to love.

Summer Switzer
Send a comment to the editors
NEXT IN THIS ISSUE
Bible Lens
Bible Lens—August 22–28, 2016 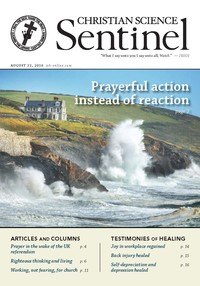