SEEING THROUGH the ILLUSION

In the early 1980s, magician David Copperfield performed an illusion that made the Statue of Liberty "disappear." Thousands of people witnessed the event either as part of the audience or in front of their television sets, and many were astounded to see this symbolic US landmark supposedly vanish.

I first learned about this magic trick as a child from a counselor at a Christian Science summer camp. I'd been spending the summer learning more about my inseparable, relationship with God, and was beginning to make distinctions in my own thoughts between the substantiality of good and the illusive nature of evil.

As I spent the summer living and practicing the truths I was learning in Christian Science, I was able to recognize that pain and fear were basic lies about my spiritual identity. A favorite passage in Science and Health consistently encouraged me to affirm God's goodness and power: "When the illusion of sickness or sin tempts you, cling steadfastly to God and His idea. Allow nothing but His likeness to abide in your thought" (p. 495).

One day at camp, flu-like symptoms left me spending the day indoors while my friends were playing outside. One of my counselors came to check on me, and, being a good storyteller who liked to make people think, he told me about Copperfield's famous illusion and the secrets behind the well-known trick. I listened attentively as he explained exactly how the magician made the statue "vanish," and connected it with what I'd been learning in Christian Science. By the time the counselor had finished, I felt completely well and quickly joined my friends outside.

As I reflected on this experience years later, I realized that what had happened was the result of my understanding the concept of an illusion. I had made a mental connection between Copperfield's illusion and the idea that I, as one of God's loved children, could exist outside of His care and suffer from illness. I simply identified the illness as a mistaken view of my spiritual identity—just as I recognized that the famous stunt had never altered the statue itself.

Since that time, as I've grown in my study and practice of Christian Science, I've learned that depending upon our physical senses to tell us the truth about our health or contentment is ineffective. Only a deeper understanding of our spiritual identity frees us from believing that we are bound to suffer from disease or decline. Freedom from illness comes when we recognize and cherish our permanent connection to God, the only source of good, which is always with us.

A couple of things about Copperfield's magic trick continue to help me as I consider its relevance to seeing through any illusion that threatens to disrupt my health or peace of mind.

It's compelling to me that the trick involved carefully directed light, towers built to frame the statue in the dark, a rotating platform that disoriented audience members, and lots of dramatic music. To make the statue appear to vanish, the magician slowly turned the audience by rotating the platform on which they sat—like a giant Lazy Susan—so that a large and brightly lit tower obstructed their view. The audience didn't even know they were turning because the bright lights and drama distracted them! (William Poundstone, Bigger Secrets: More Than 125 Things They Prayed You'd Never Find Out [Boston: Houghton Mifflin, 1986]). Copperfield's audience would have perceived that the Statue of Liberty had not actually disappeared—if they hadn't been caught up in the events all around them. Had they simply shifted in their seats, they would have seen the statue standing just as solid as ever behind a tower built to block their view.

Similarly, I realized that even when the drama of personal or world events threatens to convince us that human lives can be in turmoil, nothing can actually separate, block, or turn us from God's love. And a commitment to understanding this truth dispels fear, doubt, and suffering.

Another idea I took away from the trick helped me understand the pitfalls of reasoning from a flawed premise. If we were trying to discover the truth about Copperfield's illusion, and started from the premise that the statue actually had vanished, we could spend hours trying to account for its loss. We could spend time wondering where it went, when it disappeared, and how long it would take to reconstruct the statue. Maybe we'd even relive the moment of its disappearance over and over, and become fearful that something like it could happen again.

Armed with the truth behind the magic, however, these concerns become baseless. And likewise, in our own lives, if we correctly start from the premise that God's love is permanent and cannot disappear even for a moment, we don't need to spend time fretting about where evil comes from or why it presents itself. Instead, we can effectively prove the all-power of God in our lives through healing.

I had a chance to prove this premise one night last winter, when I began to experience the symptoms of strep throat, after hearing people in my community repeat warnings about this condition. Swallowing was difficult, and I couldn't get comfortable. But before going to sleep, I silently declared that I wasn't going to let fear of this disease dim my spiritual light. Again, I thought about the idea of sickness as an illusion, based on a false premise that God's child could suffer. In other words, I turned my thought away from a fear-based perspective and shined the light of spiritual understanding onto the situation.

I was beginning to make distinctions in my own thoughts between the substantiality of good and the illusive nature of evil.

Once my fear was gone, so was my discomfort. Shifting the premise resulted in an instantaneous healing. I was overjoyed at the swiftness and simplicity of this healing, and soon fell asleep, confident that I was permanently free.

This helped illustrate for me that we can dispel fear and illness for ourselves and others if we shine the light of spiritual understanding in the right direction. If any one of the audience members at David Copperfield's show had shined a spotlight on the statue, the nature of the trick would have become clear immediately. No one saw that the statue was still there, because they were literally turned around. One person alone could have helped the entire audience see what was really happening. Similarly, a key aspect of Christian Science practice is seeing the truth about reality, and then sharing this understanding with others.

When convincing images of suffering confront us, we do have a sure defense. It's so comforting to know that, as the Psalmist stated in the Bible, "If I take the wings of the morning, and dwell in the uttermost parts of the sea; even there shall thy hand lead me, and thy right hand shall hold me" (Ps. 139:9, 10). Even if we question God's love for us in difficult times, nothing can sever our unity with Him. It doesn't matter if we've spent a lot of time trying to figure out what's behind illness or disharmony. The conclusion can only ever point to the illusory nature of matter. Changing perspective and reexamining things from the premise that disease is impossible, because God's love is all that there is, can result in immediate healing.

God's care for us cannot disappear. Since our connection to our Creator is a permanent spiritual fact—like the freedom symbolized by the Statue of Liberty—it cannot vanish or be destroyed. As we start from this premise, spiritual healing happens naturally.

Christie Hanzlik-Green lives with her family in Boulder, Colorado. She's finishing a Ph.D from University of Wisconsin-Madison, likes to write, play with her kids, and enjoys life outside.

Send a comment to the editors
NEXT IN THIS ISSUE
Article
To be a good soccer player ... 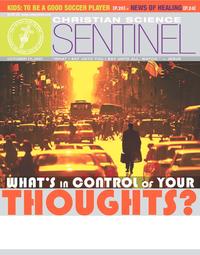