When I Was A Child, I would sometimes be left alone for several hours at a time. Yet, I knew that there was a loving power that was looking after me, protecting me. This benevolent power was unseen, but at the same time tangible to me. It was God.

At that time my concept of God was simple. But because of my trust in this power, whom I called "Father," I had the confidence to confront things that might otherwise have intimidated me. For example, once when my porcelain doll was broken, I was filled with fear because it had been very expensive. But I prayed to my Father, "Please don't let my doll be broken," and when I opened my eyes again, I felt completely calm and saw how to fix the doll.

Later, as I began attending my family's church, I learned that my relationship to God was possible only because Jesus had died for my sins. I was taught that when Jesus died on the cross, he paid the price so that I could have a relationship with his Father. I learned that God required sacrifice if you wanted to be close to him, and therefore Jesus had come to sacrifice his life for me. I didn't entirely understand this because it seemed so unfair to Jesus and involved a God rather unlike the God I knew and loved.

That was the teaching in the religion in which I was brought up, and I accepted it. The subject of grace, however, was left to each individual to try to understand. My concept was that grace was a free gift of love from God, and that it wasn't something to be earned. Yet, my church taught that in response to this gift of love, we were expected to devote our lives to God. I remember one of our pastors explaining grace as "God's riches at Christ's expense." Rather than bringing me comfort, this kind of reasoning engendered feelings of guilt and unworthiness. I was always wondering if I was living up to this gift of love, and thought that probably everyone else deserved God's love more than I.

Nevertheless, I persevered in my efforts to devote myself to God and to be worthy of His grace—of His love for me. And through my own study of the Scriptures, I confirmed that God did want my obedience to His Word. This desire to be obedient and to dedicate my life to God led me to become a lay preacher in my church, and to go through formal training to be commissioned for this work. This was a six-year preparation.

During this time of consecrated study of theology and the Scriptures, grace was discussed only in relation to doctrine, to theory—never as a practice. We learned that the means to receiving grace came through prayer—through worshiping together, Bible study, and participation in the Eucharist (taking communion). But grace as a quality that one naturally expresses—that is actually practiced—was never addressed. And though I was a lay preacher for nearly 20 years after my training, I consistently found myself wondering why grace wasn't more evident in relationships among people—especially in church. It was at about this time that I began to read Science and Health with Key to the Scriptures by Mary Baker Eddy.

Through reading this book, I gained a greater understanding of what grace really means. And in another book, Christian Science versus Pantheism, Mary Baker Eddy wrote that God's grace is "the effect of God understood" (p. 10). Rather than the sacrificial price I had been taught that grace required, I saw that my relationship with God was unconditional, and that grace was the natural effect of my understanding this fact. And I realized that Jesus' mission was to reveal the truth of the unbreakable Father-child relationship each of us has with God because we are all His children. My understanding of Jesus was not diminished by this new view of his ministry, but rather it was enhanced. I came to believe that he was the first individual who really saw the purity and spiritual identity of each of us. His lifework was devoted to teaching and demonstrating the discipline, the awesome potential, of this way of seeing so that we, too, can do the same.

One of my favorite hymns has always been "Amazing Grace" by John Newton. A former slave trader, Newton was transformed by his realization that God loved him, despite whatever unworthy deeds he had committed. His now world-famous hymn came into being as a result of Newton's transformed understanding of his relationship to God. Newton realized he was worthy simply because God had created him. His hymn was the effect of his greater understanding of God's love.

When Newton wrote, "Amazing grace, how sweet the sound, / That saved a wretch like me," I think he was speaking about the power and magnitude of God's amazing love for His entire creation. The love that is visible in transformed lives—such as the love that impelled Newton to write his beloved hymn—is really what I understand grace to be.

During this time of consecrated study of theology and the Scriptures, grace was discussed only in relation to doctrine, to theory—never as a practice.

I had a wonderful experience in which I could see a transformation like this take place immediately. A man called me who knew nothing of Christian Science. He was in severe physical pain—he was absolutely immobile. He was incapacitated with swollen knees and back pain. He had tried many medical remedies, but nothing alleviated his pain. In desperation he called me to ask for Christian Science treatment through prayer, even though he didn't really understand what it was.

As he poured out his story to me, I told him about God's love for him and about the unbroken oneness—the relationship—he had with God. I talked to him about a loving God who could not send pain to any of His children. The man accepted what I told him, and then he related other problems from which he was suffering. Specifically he told me about his responsibilities of caring for his mother.

I assured him that God loved his family just as he was loved, and that God was taking care of all of them. I talked to him about letting God take over his heavy burden. I told him I would support him in prayer and that I would call him the following evening when I returned home from work.

When I called him the next evening, he told me that within 20 minutes of our conversation he had become completely mobile and free of all pain. He was filled with joy. He said that after we talked, he had felt impelled just to get up and walk up the stairs, which he did. His knees, which had been swollen to twice their normal size, reduced to normal right before his eyes, and both he and his mother were laughing at the sight.

This man later attended our church's Thanksgiving service and spoke afterwards of this wonderful example of God's grace working in his life. I felt that the healing was "the effect of God understood." The man began to read Science and Health, which was the start of a new spiritual life for him. Soon he was talking about playing cricket again.

This is just one of many experiences I could recount of times when I've seen what it really means to know that the Christ is Immanuel—"God with us," and we can have the Mind of Christ. God truly is All. He loves us, and we know this by the transforming power of grace made visible in our lives.

Joan Wattam is a Christian Science practitioner. She lives with her husband in Rotherham, England. 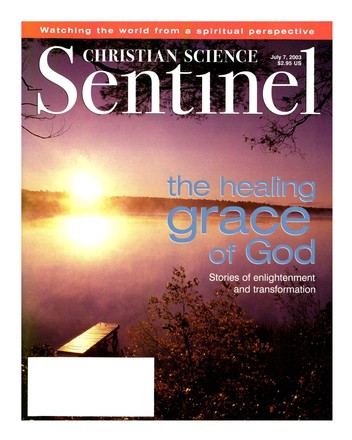 A special kind of grace

God, grace, and you

The transforming power of God's GRACE

Surviving in a tough job market

Through a spiritual lens—LIGHT REFLECTED AND LIGHT SHINING THROUGH

The Way Home—from Seoul and back again

Seeing the city of God—right here