A Happy childhood can provide a strong foundation to build a life on. But a traumatic experience can seem to weaken that foundation and leave bad effects that carry into adulthood. Sexual abuse, like any harmful experience, claims to cause permanent damage because one cannot go back and undo what has been done. When it happens to children, it seems even worse, because they have to deal with something they don't even understand.

Can the effects of sexual abuse in childhood be healed? Yes, if we understand that man, God's child, is more than the physical being he appears to be and that God is something more than a faraway figure.

Here Christian Science can help. For anyone who feels damaged by such a past, there is a way to feel free and whole again: by understanding more about the nature of God, and man's relation to Him. This is how one finds the healing balm that removes every vestige of contamination and worthlessness. A study of the Bible and Science and Health by Mary Baker Eddy provides a deeper understanding of God as infinite Love, and with this understanding, one finds that the hurts that may have come from being an innocent victim of another's immorality fade, not just into a distant past but into oblivion. Christian Science heals, not merely by helping us forget something bad, but by showing us that what we really are—a spiritual idea, God's loved child—is eternally good and pure. The effects of a bad experience are removed through understanding man's untainted identity, which is wholly spiritual. These truths can help bring healing to the child who has been abused, as well as bring freedom in our own lives if we have suffered such an experience.

When I was a little girl, the man next door began sexually abusing me. I didn't tell anyone, because at first I didn't know what was happening. Later I felt intimidated. When I moved away as a teenager, I felt I had escaped. Sexual abuse was just not talked about in those days. Years later, when the subject was much in the news, I became very ill with a painful stomach condition. I realized that I had buried the problem but not healed it.

In the intervening years I had become a student of Christian Science, and so I called a Christian Science practitioner for help. I knew that troubles could be healed through understanding more of my relation to God. Through the practitioner's prayers and my own, feelings of anger and deprivation disappeared, and I gained a greater understanding of my spiritual nature and of God as my true origin. But I still felt damaged.

The full moment of healing came when I asked the practitioner how something that had been contaminated could ever be restored. I can still remember how free I felt when the practitioner explained that purity is a spiritual quality, not a material one. I felt washed clean. The feeling of contamination fell away as a great weight. I understood then that the spiritual identity that was me and always will be me—and there is no other—had never been touched. In an allegory of a trial in Science and Health, Mrs. Eddy describes the happy state of the prisoner once he has been found innocent. I felt the same way, "regenerated, strong, free" (p. 442). Of course, the physical illness vanished as well.

Because God and man are at one, man forever has all of God's good to express or reflect. It's like the sun and its rays. The rays of light express the nature of the sun, telling us of its warmth and light. Rays forever express the heat and light of the sun. The rays will never run out of heat and light, because they come from a constant source.

One ray of light cannot darken or take something from another ray. And man's goodness is secure from theft and destruction because it has its source in God. As Science and Health explains, "Spirit diversifies, classifies, and individualizes all thoughts, which are as eternal as the Mind conceiving them; but the intelligence, existence, and continuity of all individuality remain in God, who is the divinely creative Principle thereof" (p. 513).

The belief of life in matter argues just the opposite. It asserts that man is a material being, perhaps created by God at some point but now separate from Him, left alone to fend for himself. It says that man might have some good to start with, but it is up to him to maintain it.

This is not the truth. Man is not standing alone and apart from his Maker, but is aligned and at one with Him. He is linked with and supported by divine Principle. He does not depend upon himself but upon divine Love to supply all his needs. Man does not live in matter where he is unprotected and invadable; he lives in Spirit, where he is always intact and indestructible. The Bible's promise to Joshua is for all of us: "As I was with Moses, so I will be with thee: I will not fail thee, nor forsake thee" (Josh. 1:5).

Purity and innocence, the qualities that sexual abuse seems to destroy, can never really be extinguished, because they are spiritual qualities; they remain intact because of their divine source. Our oneness with God, all good, assures us that all good is ours, and no one can take it from us or from any of God's children.

When something from the past torments us, we don't have to endure it. We can heal the bad effects by turning to God. He gives us this freedom, as well as the ability to prove it. Through the understanding of our spirituality, as God's spiritual likeness, the effects of abuse can be healed.

Seeking and finding in God whatever we think was lost or taken from us proves His love for us. We find that we are safe in the arms of divine Love. That is where we have always been, and that is where we—and every child—are for eternity. 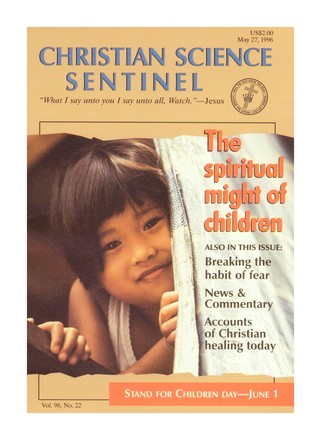 In the United States on Saturday, June 1, the Children's Defense...

Children as victors, not victims

with contributions from Kyle Miller, Andrea Schaaf | May 1996

Breaking the habit of fear

When I was a sophomore in high school, I had the opportunity...

By Germain Eolia DeMartinis | May 1996

I have had many occasions over the years to be grateful for...

One day about three years ago, when I was crossing a street...

From early childhood, I suffered from poor health