My first encounter with the Christian Science textbook happened as if by accident, but I only realized later that it was divine Love that led me to Christian Science. In 2004 I went to my friend’s house to borrow books to read. As I was selecting a book, one caught my eye, and I asked him what the book was all about. He said he did not know much about what was written in it as he had read little of the book. He then added that it had been given to him by his brother, a medical doctor, who thought it would help him because of his occasional bouts of illness.

So in an offhand way my friend loaned me the book, Science and Health with Key to the Scriptures by Mary Baker Eddy. The moment I read in the Preface, “The time for thinkers has come” and “Ignorance of God is no longer the stepping-stone to faith” (p. vii), I was hooked. I could not stop reading it.

At that time I had been seasonally suffering from tonsillitis ever since I was about ten years of age. Every year, somewhere in mid-August, I would experience inflammation of my throat glands for almost two weeks. It was a painful experience. I came to a point where I dreaded the month of August. When I was at the age of twelve, the doctor diagnosed the condition as tonsillitis. My father suggested that I be operated on to remove the glands.

I was terrified that I might never recover from the operation, so I refused to have it. I was given some tablets to relieve the pain and swelling. However, it appeared that the problem was hereditary, my father having had it, and that I was destined to have it for the rest of my life. So every year I suffered and wondered why life was so unfair to give me such a disease through my father.

But Science and Health changed all that. I understood from reading the book that God is our Father-Mother. I realized that I could never have inherited a disease from God. I was perfect because God was perfect. My heart sang Genesis 1, verses 26 and 31, which tell us that God created man in His image and likeness and that everything He created was “very good.” Suddenly that had a new and healing meaning for me. I saw that “heredity is not a law” (Science and Health, p. 178). This was a freeing moment!

Even though the inflammation did not subside immediately, I knew that I was healed. I felt at peace. I did not believe in the reality of disease anymore. Understanding that man is spiritual and Godlike freed me from the belief in hereditary disease. I could not suffer from what God could never have. And I forgot about the problem.

I even forgot to watch for the disease the following August, and it never came. I never again suffered from tonsillitis. I have also been healed of a short temper and a false sense of shame over the divorce of my parents more than thirty years ago. And I have healed others of various ailments through Christian Science treatment. My family is now healthier and happier. 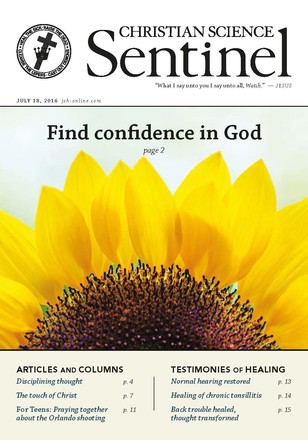 The touch of Christ

Praying together about the Orlando shooting

Retirees’ secret to happiness? Giving back

By The Monitor’s Editorial Board | July 2016