When there seems no reason to hope

Imagine, if you will, a man who has been ill for so long that he can almost not remember what it is like to be well. It has, in fact, been nearly 40 years since he was last able to get up from his bed. His case could easily be classified as hopeless. He can't walk. He has no one to help him.

Each day seems to run into the next—moments of despair marking the hours, the weeks and months, the years. And on this particular day, nothing at all about it seems any different from any other day—for the last 38 years.

Yet, it is different. Even as the man awakes to another morning of hopelessness, he hasn't counted on this one amazing thing: The Christ is coming today. And even if he had somehow been given this startling news in advance, it's likely that he wouldn't have yet known what this could possibly mean to him.

As usual on this morning, the man has his place, reserved for the sick, on the porches at the pool of Bethesda in ancient Judea. You see, this is a true story, and it happened some 2,000 years ago. As the man lies there, he becomes aware that someone is approaching. Suddenly, his visitor speaks, and it might seem a peculiar question that the stranger poses. The stranger is Jesus, and he asks the man, "Will you be made whole?"

Remember, here is a man who has been confined for nearly forty years. The question could appear almost preposterous. And yet the man doesn't seem to have it in him at this point to say yes in response to Jesus' question. Instead he begins to describe in some detail the hopeless condition to which he has come.

But Jesus isn't really agreeing with any of this. He knows better than anyone else why this man should have hope—why he should actually expect to see the blessing of God in his life. Jesus is bringing the message of Christ, Truth, and it's a powerful healing message. With spiritual authority, Jesus tells the man to pick up the mat he lies on—and walk. Can you imagine?

The man at Bethesda, Jesus understood, was and always would be the loved creation of God—pure, perfect, strong, and whole.

And the result? Immediately the man is made completely well! There's no time required for recuperation, no physical therapy demanded. The man simply rises, takes up his bedroll, and is as strong as he ever was. It's time now to glorify God, and perhaps to see the reason why the man's condition was never hopeless (see John 5:2–15).

Whenever the human condition looks to be beyond hope, this is only the determination of human thought. Even a case of physical illness may be simply one person's belief or the consensus of many people's beliefs. And yet an examination of outward circumstances or physical symptoms—the diagnosis of what appears to be going on in one's life or body—is always faulty when it's based solely on material evidence. It's never the whole picture. The whole picture is, in fact, the perfect wholeness of each of us—as we are truly created in God's image, as His spiritual reflection. Ultimately, this is the message of Christ, or Truth, that Jesus was bringing to the man at the pool of Bethesda through his healing.

This remarkable healing was not only demonstrating reason for the man always to be hopeful, but also proving that the limited, material view of who he was, never was the truth. The man at Bethesda, Jesus understood, was and always would be the loved creation of God—pure, perfect, strong, and whole. And this is just as true for you and me and everyone. As a verse from Psalms in the Bible asks us: "Why art thou cast down, O my soul? and why art thou disquieted within me? Hope thou in God: for I shall yet praise him, who is the health of my countenance, and my God" (42:11).

With the discovery of Christian Science, it was shown that the healing practiced by Jesus could also be practiced in contemporary life, according to understandable laws of God. These laws were revealed to Mary Baker Eddy through her deep study of the Bible; and she put them to the test, healing all sorts of disease through prayer. Many of the cases that came to her had no doubt been considered hopeless or incurable. Nonetheless they were healed.

Writing of her healing practice in Science and Health with Key to the Scriptures, Mrs. Eddy stated: "The author has healed hopeless organic disease, and raised the dying to life and health through the understanding of God as the only Life" (p. 428). And besides the direct cures realized from her own Christian practice, countless healings were taking place in the lives of those who read the book on their own.

Here's one example. In an account published in the final chapter, "Fruitage," a man wrote of having suffered with numerous physical sicknesses for 15 years, including tuberculosis and a liver disease. He had tried everything he knew for relief, but nothing had worked. He stated, "My life was one ceaseless torture." At this point, "sick, weary, doubting, and despairing," he wandered into a Wednesday evening healing meeting at a Church of Christ, Scientist. This led him to purchase a copy of Science and Health. After reading the book from cover to cover in four days, he put the book down and began to pray quietly.

He said that he "felt like the mariner who had been tossed for days upon a boisterous sea...." The storm is raging around the mariner, and "in his despair he kneels and commits his soul to God, when he suddenly beholds the North Star breaking through the clouds, enabling him to guide his ship to the shores of safety." The man went on to say that there were many new things revealed to him about his relationship to God, and he found that he was wonderfully free of the pain and debility. He slept peacefully that night. He was healed. He concluded his personal testimony: "There are now no traces whatever of my former complaint and I feel like a new being" (pp. 621–622).

As in Jesus' ministry and in the spiritual search of that man who read Science and Health, God's laws continue to provide the way out of despair and darkness. The Christ continues to come to each of us with God's healing message. In the words of the Apostle Paul, "May the God of hope fill you with all joy and peace in your faith, that by the power of the Holy Spirit, your whole life and outlook may be radiant with hope" (Rom. 15:13, J.B. Phillips).

Yes, there is always reason for hope.

Bill Moody is a Christian Science practitioner and teacher. He lives in Plymouth, Massachusetts. 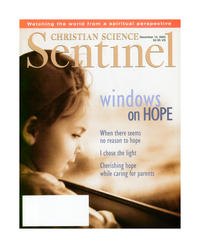