Our freedom to not “cling to personality”

Recently, a friend who regularly visits prisons was put to the test of fulfilling her Christian commitment to loving her neighbor. It demanded a willingness to look beyond the personality of one of the inmates. Let me explain.

This individual attacked her verbally in a very personal way, but my friend, a Christian Scientist, chose to embody spiritual love. That’s what she was there to share as a volunteer prison chaplain. She looked past the individual’s behavior and the hostile thought behind it. She prayed to see what divine Love, God, always sees in everyone—namely that we are each God’s loved, spiritual offspring.

As a result, my friend kept her cool. She also went on to have inspiring interchanges with other prisoners. And as she was leaving the prison wing, the harasser called out after her, sincerely offering an unsolicited apology.

Even when someone is acting like an enemy, we are always free to follow Jesus’ counsel to love. While doing so might seem optional, loving one another is actually both innate and integral to everyone’s God-created being. There’s a core reality to each of us that never loses sight of its genuine and natural inclination to love, because this propensity isn’t rooted in a changeable personality. It comes from the fact that we have a changeless spiritual identity.

As we perceive this underlying spiritual nature in others, we’re able to make a distinction between hostile thoughts and the true, spiritual identity of the individual. Doing this is a powerful aspect of Christian Science practice. Mary Baker Eddy, who discovered this Science of the Christ, the healing truth behind Jesus’ words and deeds, wrote, “To impersonalize scientifically the material sense of existence—rather than cling to personality—is the lesson of to-day” (Miscellaneous Writings 1883–1896, p. 310).

Time and again Mrs. Eddy’s writings warn against every belief in and reaction to personality.

To impersonalize a material sense of things and not “cling to personality” is to see all that is ungodly as completely separate from the one exhibiting ungodliness. In addition, we can see that ungodliness is wholly apart from the true source of our thoughts, the divine Mind, which is God. Finally, we can yield to the understanding that there is no “apart from” Mind, because God is infinite, All. This recognition of the unreality of all unspiritual thinking frees us from reacting to the lie that the spiritual individuality God bestows can be buried beneath a sinful personality. As my friend found, it can also support anyone in rising above that belief about themselves.

But there’s another way to “cling to personality” that would stifle our God-given spiritual freedom and that demands our growth out of it. Like fear and hatred, a personal sense of love misses the mark of spiritually perceiving others as they are. For instance, succumbing to the allure of personal charisma or the attraction of another’s wielding of personal power is idolatry—a sensual inversion of the heartfelt affection we rightly feel for any God-reflecting qualities we note in others, such as humility, grace, love, and spiritual authority.

Yet even when someone has such admirable qualities, it still misses the mark to see that person as the source of those qualities. This was made plain when Jesus, the best man who ever lived, rebuked an admirer with the words “Why do you call me good? No one is good but God alone” (Mark 10:18, Revised Standard Version). Similarly, in her published writings, private correspondence, and the By-Laws governing her Church, Mrs. Eddy consistently steered followers away from personalized appreciation of her to reverence for the divine Principle, God, her teachings illuminated.

And that was just the tip of the iceberg. Time and again Mrs. Eddy’s writings warn against every belief in and reaction to personality. She wrote to one student, “What our Cause needs most is the impersonalization of thought,” ruing the fact that there seemed to be “little if any growth in this direction” among her students (Yvonne Caché von Fettweis and Robert Townsend Warneck, Mary Baker Eddy: Christian Healer, Amplified Edition, p. 230). Those words were written in 1896, yet the need to free ourselves from harboring a personal sense of others remains vital for all humanity, in a world where personality would dominate the media, social media, and politics.

Rather than making the unreal seem real by clinging to anyone’s personality, we can faithfully cling to what is real, namely the infinite Mind and its manifestation as everyone’s true, Christly consciousness. Nothing other than God’s pure, spiritual likeness ever truly constitutes our or anyone’s being. This genuine selfhood that each individual has is wholly distinct from personal ability, whether prowess or inadequacy. Taking a stand in prayer for the freedom to consistently bear witness to our own and others’ spiritual identity contributes to everyone’s spiritual growth. It helps forward humanity’s ultimate freedom: salvation from all materiality, including freedom from the lure and lie of material personality. 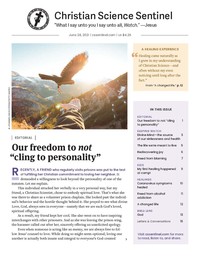