While watching the National Basketball Association play-offs, I saw a lot of beer commercials. Two that were aired often had these slogans: "It's as real as it gets," and "Come, taste the high life." Many years ago I would have been a dutiful listener and gone to the refrigerator during the commercial for a cold one! But this particular evening, as I listened, the commercial instead turned my thought to God.

A beer commercial turning one's thought to God? How was that possible? Well, since my study of Christian Science began several years ago, my greatest thirst has been to know God better. And this understanding I have gained of Him through the study of the Bible and of the Christian Science textbook, Science and Health by Mrs. Eddy, has given me the greatest satisfaction I have ever experienced.

You see, during my early teens, I, like many others in my school, began to drink and to smoke cigarettes. Then in high school I was introduced to marijuana and hashish and began using these drugs many times a week. By the end of high school, I was not only addicted to cigarettes but drank and got high often. And at that point I began to use cocaine and experiment with harder drugs.

Satisfied? No. Happy? Absolutely not. Healthy? Sicker than I'd ever been. Yet the pull to run this sort of life still seemed to drag me around.

Looking back on those years, I can see that apart from the belief that these were "the things to do," I also was trying to fill a void, to feel satisfied, to feel happy, to feel good. And certainly there is nothing wrong with the desire to feel satisfied, happy, and good. It's just that I believed that these feelings came from without instead of within. So I continued to travel down this path that led nowhere, barely able to graduate from high school, and had no choice but to work menial jobs, as I had no hope of going to college.

Then one night, living alone and depressed beyond belief, I felt for the first time that I had reached the very bottom of a big dark hole and that this was where I was going to stay. I saw no way out. I vividly remember that night, not knowing where to turn as I lay in bed almost waiting for the end. But what happened next was something that is described beautifully, I learned later, in a passage in Science and Health. It reads, "The sharp experiences of belief in the supposititious life of matter, as well as our disappointments and ceaseless woes, turn us like tired children to the arms of divine Love." Science and Health, p. 322. I was a very tired child, and although I did not realize what I was doing at the time, I turned wholeheartedly to God. Now, mind you, I had not had any religious upbringing except for some contact with a wonderful aunt who was a Christian Scientist. And when as a child I would go to visit her and my cousins, she would often tuck me in at night and read a poem by Mrs. Eddy.

All this time had gone by, and I hadn't thought of God in years. Yet that evening, these words from the long-forgotten poem flooded my thought: "O gentle presence, peace and joy and power; / O Life divine, that owns each waiting hour." Poems, p. 4. That is all I could recall, but it comforted me greatly. Right there, in the midst of mental hell, I felt God's presence for the first time in many years.

That was a real turning point in my life. In the next few months I began investigating Christian Science, although I still smoked and drank. But the use of hard drugs had stopped. Within the next six months all desire for alcohol and cigarettes left. Some of my friends may have felt that now I was going to start missing out on good times, but I knew I was gaining the most important thing in the world—a better understanding of God and how He has created me to express Him as His pure and perfect spiritual likeness.

As I studied the Bible and Science and Health, I got to know God as all good. And as I understood more about Him as the one and only perfect creator, I could see how and why I was created perfect—whole and free and good, as His spiritual image must be. Often I prayed the Lord's Prayer given to us by our dear Master, Christ Jesus. And I read it also with the spiritual interpretation given by Mrs. Eddy. One line that was most helpful was "And lead us not into temptation, but deliver us from evil," Matt. 6:13. with its spiritual interpretation, "And God leadeth us not into temptation, but delivereth us from sin, disease, and death." Science and Health, p. 17.

I could see that all the difficulties and heartache during the years I had spent involved with drugs and alcohol were not God's fault, as some may commonly believe. They were the result of my ignorance of His allness and supreme goodness. I had been believing that satisfaction and joy came through things and circumstances external to consciousness instead of through the understanding of one's God-created being. This, I have since learned, is the big lie—the belief that existence is material, sinful, changeable, mortal. The man of God's creating, and therefore of His doing, knowing, and seeing, is and always has been His likeness, good and spiritual. This pure image and likeness of God is the true being of each one of us. 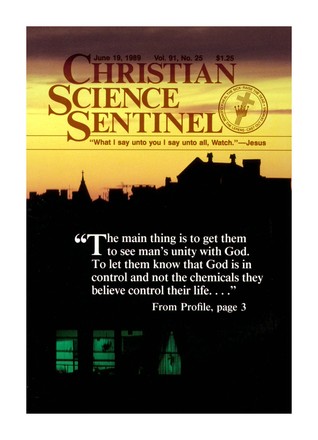 To learn that God is in control, not drugs

with contributions from Pearl Long | June 1989

In all I write, reflect

What use is it, anyway?

Christian Science came into my life as the answer to my...

I have had many, many healings through Christian Science

My family was introduced to Christian Science when my grandfather...

It has been eighteen years since my last testimony appeared in...

A few years ago I traveled to Seattle, Washington, to attend a...