Don't just put up with it!

One day at school, our gym class had some free time to play a bunch of different sports. Some of the guys in the gym were playing dodge ball, throwing rubber playground balls at each other. I was standing near a concrete wall, and a ball flew toward me, hitting my hand against the wall pretty hard.

I immediately felt some pain, and within five minutes, three of my fingers were badly swollen and aching. The teacher wanted me to put ice on my hand, and my friends were worried that I might be badly hurt.

With all the noise in the gym, and the comments from the class, it was hard for me to be still and pray. I tried to recall ideas I'd learned from the Christian Science Sunday School, but I couldn't focus with everything going on around me.

I also began to feel unusually defiant, trying to ignore the problem and hoping that it would magically go away. I later was reminded that ignoring a problem and hoping it goes away is not the same as facing up to it through prayer in Christian Science.

But for the rest of that school day, I switched back and forth between trying to stubbornly use my hand as much as I could, and keeping it still when it hurt. I got through the rest of the day without too much difficulty, but I kept up my battle to ignore the problem.

When I got home from school, my mother and I called a Christian Science practitioner right away. The practitioner and I talked about some of the "basics" of prayer, which I'd learned in Sunday School. We talked about things like the fact that God made me good, in His image and likeness (see Gen. 1:26). And we also discussed "the scientific statement of being" from Science and Health (p. 468). Even though I felt a little bit better, I remember that my prayers were still just sort of halfhearted metaphysical thoughts.

When I returned to school after a day of resting at home, I realized that my hand didn't seem to be getting much better. My mom and I continued to communicate with the practitioner for a few more days, in order to discuss spiritual truths. Then I began to notice that there was progress with my hand. Very soon, all my fingers were back to full functionality, and there was no more swelling or redness.

I was so grateful that my mom and the practitioner prayed with me. Their support meant a lot. But there was more to this healing—actually, much of what I learned I discovered after the healing took place.

An idea I'd learned in Sunday School had really clicked for me, in a new way. I remembered that I was a spiritual idea of God, as opposed to just a material body with all kinds of problems to deal with. I'd been putting up with this situation with my hand, hoping it would go away, which was like accepting that it had power to ruin my days at school. This passage from Science and Health helped me a lot: "When an accident happens, you think or exclaim, 'I am hurt!' Your thought is more powerful than your words, more powerful than the accident itself, to make the injury real. Now reverse the process. Declare that you are not hurt and understand the reason why ..." (p. 397). To me, this meant that, really, I couldn't be hurt because God had always been with me. And God was good and the only power in my life.

I realized that it's not helpful to stoically endure something bad, instead of facing it and dealing with it through prayer. In Christian Science, "first aid" means praying first and trusting God to come to our aid. Even though it was hard to pray in this situation, it was absolutely necessary. |CSS

Ian Hobbs lives in North Carolina with his family. He enjoys playing video games with his friends and spending time with his two cats and four foster kittens.

Send a comment to the editors
NEXT IN THIS ISSUE
Article
I REJOICE, FOR THIS DAY IS GOD'S 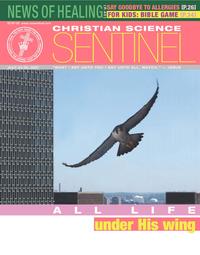