Together in the spirit of holiness

We were a motley crew from Ireland, the United States, Australia, and the United Kingdom making our way to the Chimanimani Mountains in Zimbabwe. There were five of us in Alison's open white pickup truck. We were not a close-knit group, and it wasn't until we arrived that we realized that we hadn't brought enough food.

The first afternoon we hiked three hours up to a rustic, communal mountain chalet, which we shared with about 15 others from South Africa, Germany, and somewhere in the Middle East. That night we ate noodles with broth. I was already hungry, and we had several days to go. The next day we hiked up to Mount Binga on the border of Mozambique. We ate crackers and jam, and baked in the sun.

That was Christmas Eve, and when we got back to the chalet, the place felt festive. But the five of us were silent as we watched the moon rise over the mountains. Around us the air was filled with longing. It was Christmas, and we were far from home.

After a very restless night, I climbed to a small peak above the chalet and watched the sun rise. I began to think about all that I could hope for in Christmas. I wanted a tangible sense of holiness, relevance, peace, promise. I thought about the borderless activity of infinite Love. I thought about the Christ—the present Christ—that deep and relentless voice of Truth speaking in all hearts everywhere.

In an article titled "Christmas, 1900," Mary Baker Eddy wrote: "To-day the watchful shepherd shouts his welcome over the new cradle of an old truth. This truth has traversed night, through gloom to glory, from cradle to crown. To the awakened consciousness, the Bethlehem babe has left his swaddling-clothes (material environments) for the form and comeliness of the divine ideal, which has passed from a corporeal to the spiritual sense of Christ and is winning the heart of humanity with ineffable tenderness" (The First Church of Christ, Scientist, and Miscellany, p. 257).

In the stillness of that morning, I began to feel this tenderness: a tangible certainty of God's all-powerful and loving presence. As the sun rose higher, everything around me looked drenched in love. I no longer felt lonely or separate or hungry. I knew that Christmas was bigger than any place or gathering—that it was evidence of God's irresistible goodness, and the dawning of this certainty in all of our lives.

From there on out, every moment had a joy all its own. As we hiked, we found clear mountain pools to swim in, a waterfall with a cave behind it, and the perfect place to camp. The day was filled with running, singing, swimming, more waterfalls—and canned Christmas pudding, which Alison had had the foresight to bring. We even met a man traveling alone and invited him to join us. It was as if he had been waiting for us, with enough food to feed us all for the rest of the trip.

I don't think I could have felt closer to family and friends than at that moment. There were no trappings, no traditions—just a profound awareness of the spirit of holiness engulfing the world. To me that was and is true Christmas: consciousness of the oneness, the allness, and the goodness of God. And awareness of what it means to be His holy child. 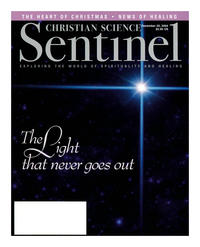