For three years I suffered from what the doctors diagnosed as asthmatic bronchitis. The spells appeared with every change of season, especially when it was humid, and lasted between three and four weeks. Although I was taking prescribed medication, my health didn’t improve. In fact, I was feeling worse. At one point the medicine stopped having any effect, even though the doctors changed the medications at times.

I remember that the last time I went to see the specialist, I left his office annoyed, although I didn’t know why. When I got home, I went into my room, closed the door, and, kneeling down, prayed: “God, I don’t think You are sending me this ailment.” After two more days, I quit taking all medication.

After I became acquainted with Christian Science, a world of new ideas about health opened up to me. I began learning about what God is and about my relationship with Him. I began to see that disease does not belong to the children of God, and that health is His law for us. Divine Love does not send sickness because God loves His children. So I began studying with much enthusiasm. I wanted to learn more and more about the teachings this Science was offering me. One of the most beautiful things I learned was that since God created everything good, nothing bad can affect me.

In Science and Health with Key to the Scriptures, Mary Baker Eddy writes, “So long as mortals declare that certain states of the atmosphere produce catarrh, fever, rheumatism, or consumption, those effects will follow,—not because of the climate, but on account of the belief” (p. 386). I saw I needed to change my way of thinking.

As soon as I started the study of this Science, I had the certainty that I would be healed of this condition. Whenever I had a bronchitis spell, my relatives would tell me not to take a shower or wash my hair. But I did it anyway, not to be rebellious but because I felt a sense of freedom and was convinced that nothing could harm me.

Hymn 195 from the Christian Science Hymnal was of great help. The second verse reads:

Girt with the love of God, on every side,
I breathe that love as heaven’s own
healing air;
I work and pray, and follow still my
guide,
And fear no foe, escaping every
snare. (Horatius Bonar)

Little by little the bronchial condition stopped coming back. I’ve been completely free for about 20 years now. This healing was a special experience because since I began praying about it in Christian Science, I never stopped my activities; I continued working and studying. I have always loved sports, and now I participate in them with much more freedom. I have a totally normal life, and I am not afraid of the changing seasons anymore because I am confident and have the conviction that divine Love is always present. 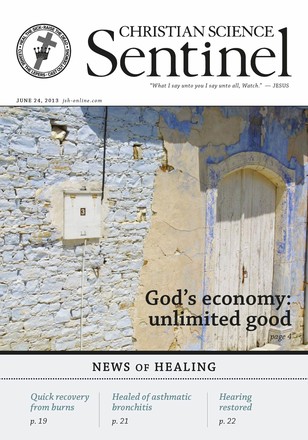 The Moldau and the Dead Sea

European unity: What is the real need?

Trust the spiritual law of harmony

Pope Francis: God has redeemed everyone, 'not just Catholics'

My song of praise

Back pain and warts disappear