When I retired from work and began the process of collecting my pension, I immediately ran into a roadblock. I had gotten divorced some years earlier, and at that time I’d had to pay my ex-husband a portion of my pension and my 401(k). But as a result of a mistake on the part of my ex-husband’s lawyer, it appeared as though I still owed my ex-husband part of my pension. I was legally obligated to prove that my ex-husband had already received everything that he was entitled to before I could start collecting checks.

Rather than being calm and turning to God, I was initially irritated that in order to collect money that I was entitled to receive, I had to jump through hoops to clear up a mistake that was not my fault. When I called my company’s benefits center for more information, the representative was steadfast in her response that there was nothing she could do to help me. At this point, I decided I should start to pray.

I knew that nothing could ever prevent me from having what was rightfully mine—a steady supply of love, peace, and security.

As I prayed, I reasoned that no error of any kind could keep me from whatever supply I needed. I prayed to see that God, as my Father-Mother, is my only source of supply, and that nothing can stop God from caring for His beloved child.

At one point I thought I had found a document that would resolve the matter, and I sent it off to the benefits center, but it turned out not to be sufficient. Feeling extremely frustrated, I once again began to pray. I prayed to understand that the “legal people” were children of God just like me, having the same Father, being governed by the same Mind. And of course I realized that they weren’t maliciously trying to keep me from getting something I had earned. They were doing what they perceived to be right and following protocol.

I also prayed to know that, as God’s children, we all express the same divine intelligence and wisdom. I affirmed that it is God’s law that governs the true man, not material laws or legal errors. Regardless of what the material evidence tried to tell me, I knew that nothing could ever prevent me from having what was rightfully mine—a steady supply of love, peace, and security—because these already belonged to me, as the spiritual expression of God.

I recognized that God is always working His purpose out, and I knew that the understanding of this truth can bring a correction if things aren’t going the way they should. In order to see progress, we have to stop trying to control our lives and instead yield to God’s unfoldment. As Mary Baker Eddy writes, “When we wait patiently on God and seek Truth righteously, He directs our path” (Science and Health with Key to the Scriptures, p. 254).

Relying on these prayerful ideas, I called the benefits center back and humbly asked what I needed to do. The representative told me that I could write a letter stating that my ex-husband had already received what he was owed, and then ask him to sign the letter and have it notarized.

We always pray to understand that God never created anything but good.

I immediately drafted a letter. Then I sat down and began to pray again because I was worried that my ex-husband might think there was a need to take me back to court. I prayed to know that God is the only power; that the one, divine Mind is directing all of God’s children, who are perfect and loving. I knew I had to be confident­­—truly understand—that God was governing and wait for His direction. I took to heart this Bible passage: “Trust in the Lord with all thine heart; and lean not unto thine own understanding” (Proverbs 3:5).

Before talking to my ex-husband, I waited patiently for the “still small voice” to guide me (I Kings 19:12). Then one day, when I saw him, the words just came to me. I told him that I was trying to get my pension, and that the company needed him to confirm that he had already received what he was entitled to in our divorce. He happily agreed to sign my letter and get it notarized the next day. I was able to submit the letter to the benefits center, and a short time later I began receiving my pension.

We never pray from the standpoint that there is a material situation that needs to change; we always pray to understand that God never created anything but good, and that we can’t be separated from this good, which is eternally ours as God’s reflection. We have to let go of the feeling that we need to take care of everything, and instead trust in the divine operation of God’s law. God is always in control, and everything in His kingdom is harmonious.

As Mrs. Eddy writes, “The relations of God and man, divine Principle and idea, are indestructible in Science; and Science knows no lapse from nor return to harmony, but holds the divine order or spiritual law, in which God and all that He creates are perfect and eternal, to have remained unchanged in its eternal history” (Science and Health, pp. 470–471).

All that’s ever required is for us to listen for and yield to God’s guidance, realizing that harmony is a divine law. 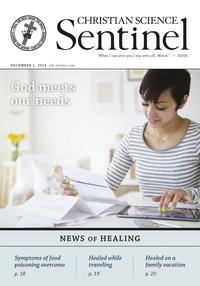