Walking a fine line, or safe in God’s infinite care?

Recently I spent a few days helping my daughter take care of her daughters while their daddy was at a business conference. I was sharing a room with my granddaughter Lily Sue, who is in preschool.

One night she became quite congested, and her coughing wakened both of us. Just about this time her baby sister woke up and wanted to be fed. For about a half an hour the four of us were all together. Mom then scooped up both girls and took them to her room to snuggle so Grammy could go back to sleep.

Instead, though, I felt inspired to stay up praying. I’d seen before how prayer can bring out the power of God’s realness in a way that brings healing.

For two hours I prayed, letting the idea of God as infinite and good settle deeply in thought. Christian Science explains the nature of God through synonyms, such as Spirit, Love, and Life. I took these three and other names for God and considered them from the standpoint of God’s infinitude. For example, Spirit as the boundless animator of each of us, God’s inexhaustible spiritual expression. Divine Life as the indestructible, eternal Divine Being we express. Divine Love that tenderly, unfailingly embraces everyone. More than just nice names, these synonyms point to the presence and activity of the all-powerful God, good.

As I pondered these, the idea that God is really All became tangible to me; I felt a deep sense of the infinite spiritual goodness God actively expresses in all, including my granddaughter.

Then something came to thought that did not fit with this glorious expansiveness of Love: a notion that people can be subject to circumstances outside of God’s embrace where they are walking a fine line between joy and sadness, health and illness—a precarious and fragile balancing act where peace can be lost.

This notion is pervasive; we see it among those with young families, those with fixed incomes, those responsible for senior family members, those with minimum wage jobs, and beyond. But there’s comfort to be found in the truth that there are no finite edges to infinity. Science and Health with Key to the Scriptures by Mary Baker Eddy, the Discoverer of Christian Science, explains, “God is at once the centre and circumference of being” (pp. 203–204).

The idea that God is really All became tangible to me.

This is such a profound thing to contemplate. Where would an edge exist in such an “at once”-ness? The all-pervasive atmosphere of divine Love has no outside to it, no ups and downs or ins and outs. A reassuring promise in the Bible declares, “Whatsoever God doeth, it shall be for ever: nothing can be put to it, nor any thing taken from it” (Ecclesiastes 3:14). The infinite allness of God, of good, is not a house of cards that can be shaken. Just as the fundamentals of math are forever established, God’s reign and rule of harmony is permanent, unshakable, and at hand—to be experienced.

The Bible also assures us, “Every good gift and every perfect gift is from above, and cometh down from the Father of lights, with whom is no variableness, neither shadow of turning” (James 1:17). The care that God, our Father-Mother, has for His, Her creation is a steady flow of goodness that is not subject to one misfortune after another (or any misfortune). It is the inevitable and permanent outcome of the supremacy and allness of God. Affirming and feeling this divine power is powerful prayer that tangibly reveals God’s care for His creation.

At this point, it was morning. My daughter decided to let Lily Sue sleep in, but suddenly Lily Sue popped up in bed and told her mom, “I want to go to school.” She was clearly free from the coughing and congestion and was feeling well rested, so we quickly mobilized and got her to the bus on time. She had a great day, full of her usual energy.

How wonderful to glimpse that we are secure in the infinitude of the Divine—that despite how it may seem at times, one’s health, resources, strength, and capacities are not precarious at all. Our one and only true circumstance is spiritual, based in the allness of God. We cannot fall off the edge of goodness because we are smack-dab in the measureless middle of Love’s infinite embrace. Even a little understanding of this can bring greater health and harmony into our lives. 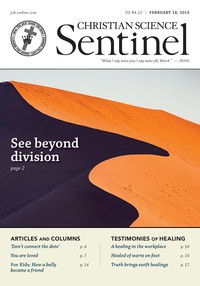