In one of my earliest jobs, I worked in a department where I was the only woman, and my colleagues took great delight in telling off-color jokes and making sexist remarks in my presence at staff meetings. My boss thought this was funny and joined in. I didn’t find any of it funny and became increasingly uncomfortable.

When I applied for a promotion in my department, I was not even interviewed, although I was very well qualified for the position. A man who was my junior was hired instead. When I asked my boss about this, he took my face in his hands and said that I was so pretty, why didn’t I just get married and not worry about it?

I was at a loss for words. I felt humiliated and didn’t even want to go back to work. I needed the job, though, so I prayed and listened. God’s response was in the form of a question that kept coming to my thought: Who are you?

I pondered that question deeply for days. I could reply that I was a highly educated person, brown-eyed, female, at a certain age and stage of life—and the list went on. But it wasn’t until I looked at the question from a spiritual perspective that healing light began to dawn.

Who am I? I had learned from my study of Christian Science that, in reality, I am a child of God, created in the image of my Father-Mother—and so is everyone else. Reasoning logically from that spiritual fact, I saw that I could not truly be put down or insulted, nor could my colleagues behave unjustly, because we were all governed by divine Principle.

We are under God’s unstoppable laws of integrity, fairness, and equality.

As the male and female of God’s creating, every one of us has only a spiritual identity, and thus, we are never subject to the downward pull of the supposed laws of matter. We are under God’s unstoppable laws of integrity, fairness, and equality. And God’s omnipotence renders any other seeming power null and void.

This realization was a turning point for me. I no longer walked into those meetings feeling vulnerable and helpless. I no longer felt like a victim.

An article titled “Taking Offense” in Mary Baker Eddy’s Miscellaneous Writings 1883–1896 includes this statement: “To punish ourselves for others’ faults, is superlative folly. The mental arrow shot from another’s bow is practically harmless, unless our own thought barbs it.” The same article concludes, “He who can wilfully attempt to injure another, is an object of pity rather than of resentment; while it is a question in my mind, whether there is enough of a flatterer, a fool, or a liar, to offend a whole-souled woman” (pp. 223–224).

What is a whole-souled woman? I reasoned that she is a child of God, divine Soul, and therefore reflects qualities encompassing the entire range of God’s nature—all the varied qualities. A human sense of gender has no power to limit anyone’s access to any of the qualities included in God’s nature. As children of God, we are fully able, for example, to express strength as well as tenderness, purity as well as intelligence.

Not long after I had this inspiration, staff changes occurred, and I was led to a new job. That wasn’t the last time I faced sexual harassment, but I now had the spiritual insights to prayerfully resolve this issue when it came up. I had become a whole-souled woman.

I thought of Eddy, who founded an international newspaper—The Christian Science Monitor—at a time when women in the United States were not yet eligible to vote. I saw, as she certainly did, that our real employer is God. We work on the tasks He directs, and He provides whatever is needed to do His will. There is no glass ceiling that can hold us back from fulfilling God’s will—no law of man’s making that can limit anyone’s ability to serve God and reflect every facet of His goodness.

There is no glass ceiling that can hold us back from fulfilling God’s will.

My career went forward, and I eventually became the director of a large department with over a billion dollars of work. I never tried to become more like a man in order to express leadership, and I never felt I needed to compete for anything. I just listened to God and followed His direction.

We are all whole-souled, governed by one God, the one infinite Soul of all. The more we see and demonstrate this concept of completeness, the more harmony we will see in our lives and in the world. The rights of women, as well as of men, will be acknowledged.

As Eddy writes on page 340 of Science and Health with Key to the Scriptures, “One infinite God, good, unifies men and nations; constitutes the brotherhood of man; ends wars; fulfils the Scripture, ‘Love thy neighbor as thyself;’ annihilates pagan and Christian idolatry,—whatever is wrong in social, civil, criminal, political, and religious codes; equalizes the sexes; annuls the curse on man, and leaves nothing that can sin, suffer, be punished or destroyed.” 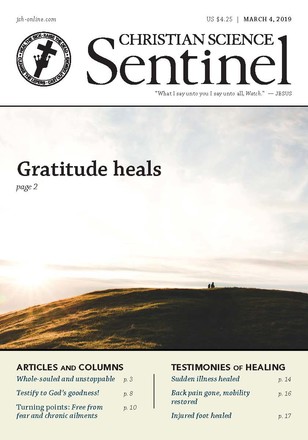 Never far from home: How I broke free from fear and chronic ailments

I remembered that I could pray

The breath of Spirit

The restorative nature of contrition